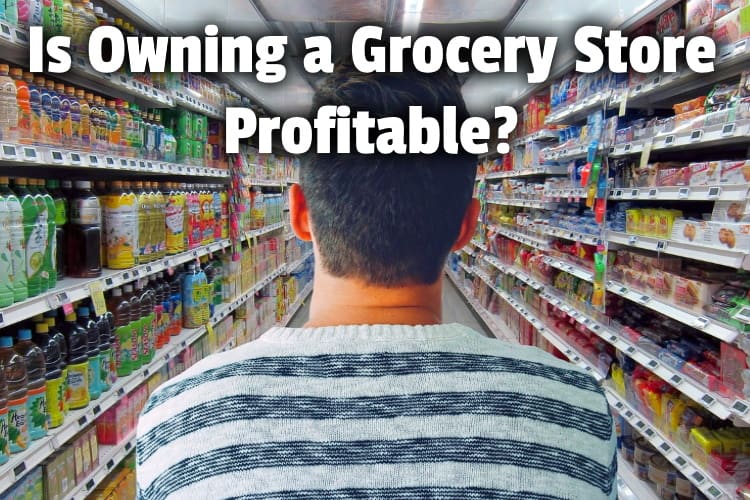 As a store manager for years, I someday dreamed of opening my own store. But I always wondered, is owning a grocery store profitable?

Conventional grocery stores make 1-2% bottom-line profit, but stores like Whole Foods Market may generate 5-12% profit. However, for small independent grocery stores, 1 to 4% is more typical. There are also a lot of factors that affect independent owners more, such as marketing, product costs, and shrink.

After all, while I ran million-dollar stores for Whole Foods Market for well over a decade, having that corporate support behind me gave me a level of support that’s just not there for small independent grocery store owners.

Large chains benefit from having the buying power of hundreds of stores behind them. That gets them quantity discounts on purchases that the mom-and-pop owners just can’t get. Smaller operations also have increased marketing costs since they are promoting generally 1 store instead of dozens or hundreds.

What is the typical profit margin for a grocery store?

First, let’s define the terms so we’re both talking about the same thing.

Gross profit is simply what you sold an item for minus what you paid for it.  If you sold a can of beans for $1.00 and bought it for 60 cents, you made 40 cents gross profit.  Net profit deducts a number of other expenses.

For instance if, in that case of 12 cans of beans, one was dented and couldn’t be sold, unless you can get the vendor who sold you that to give you credit, that’s your loss. You report that as what’s called shrink or spoilage.

Deduct all the expenses associated with selling that can of beans and you’re left with the net profit or the bottom line.

Next, we have to recognize there’s a difference between Safeway, Albertsons, or Kroger (depending on which part of the country you live in) compared to a Whole Foods, Wegmans, Sprouts, or Dean and Deluca.

The reason for that is simple; they want to sell more items for a lower price. Those types of stores don’t have as many employees walking the aisles handing out free samples or giving cooking tips. And those grocers also don’t usually have a butcher in-house who can trim up that brisket for you either.

Whole Foods, on the other hand, where I spent more than 20 years of my life, typically (and this is before Amazon bought them) might operate as low as about 5% for a larger more complex store like the company flagship I opened in downtown Austin.

But smaller, more straightforward stores might be closer to 10-12% bottom-line profit margins.

Bottom-line profit is after all expenses including wages, taxes & insurance, and all other costs associated with running the store are taken out.

What is the average markup in a grocery store?

Also, understand that different departments in a grocery store mark things up differently.

I go into much greater detail about the differences between margin & markup and how to calculate both in a recent article. Don’t worry, I explain exactly how a 15% markup is only a 13% margin. Just click the link to read it on my site.

It’s also important to think about how products get into your shopping cart and how much that might be marked up every step of the way. First, there’s a manufacturer who made the product. They make the product and allow a distributor, sometimes called a wholesaler, to sell their product for them for a cut.


How different departments mark up differently

As I mentioned, different departments mark up differently in a store. There are 3 main factors which impact why a department might mark up higher or lower compared to another:

In other words, a full-service food operation like you see in Whole Foods, with a sandwich station, pizza oven, hot and cold bars spends a lot of money on paying all the employees who work there. They also throw away a lot of food at the end of the night, so they have high labor and high shrink.

Then in a category like general merchandise (toilet paper, charcoal, pet food, etc), especially if there’s a Wal-Mart or Dollar General down the street, they may use much lower markups. After all, those products get damaged less, expire less, and generally have much lower shrink and labor costs.

So they might only mark up 10-20% (again depending on whether you’re talking about a Whole Foods or a Safeway).

Some of those figures are courtest of Integra Systems, Inc. while others are from my own knowledge of the industry.

June 1940. “General store, Pie Town, New Mexico. The post office has been moved from this store to another small grocery store.” Photo by Russell Lee.https://t.co/KEsC5yViqp pic.twitter.com/EQeExMkZA6

How much does it cost to start a grocery store?

There are, of course, a lot of little costs associated with starting a grocery store.

But generally speaking, you can expect to spend upwards of $500,000 to open a small to medium-sized grocery store.

The big expenses would be:

Some of these are obviously recurring monthly fees and others are larger one-time expenses.

Much of the above expenses will also have to be spent before you even open your doors. So you need to have enough working capital (money in the bank) to pay these expenses before you start making any money.

From a tax standpoint, the larger one-time expenses might get depreciated over the life of the product.

In other words, if you buy $6,000 of grocery carts (1 cart can easily cost $150), those will hopefully last you 7 years or more. So from a business expense tax write off standpoint, you’d deduct an equal portion of that on your taxes each year over 7 years.

How do you calculate grocery store profit?

This part is easy. You start with your sales at the top and then subtract out all your expenses below that.

Some companies might call this a P&L (profit and loss statement). Whole Foods, fond of making up its own names for everything, called this a margin report.

What’s left at the bottom is your net profit (or loss); your bottom line.

Here’s an example of the types of expenses that might get subtracted from your gross sales:

Just subtract all those (and any other) expenses you have from your total sales and that’s your gross profit. Many companies go off of a “fiscal period” rather than a calendar month.

This is because a fiscal period is exactly 4 weeks, whereas a month is sometimes 28 days and other times 31 days, making it hard to compare apples to apples.

So decide if you want to track your P&L monthly or by fiscal period.

If you use a fiscal period method, you will end up with 13 periods per calendar year. But no matter what method you choose, be consistent, and follow that system each and every time you calculate your profit and loss.

How much does a grocery store owner make?

I can tell you as a salaried Store Team Leader for Whole Foods Market, I typically made in the low 6 figures annually. I got paid an hourly wage (but was salaried and did not clock in) plus I got a quarterly bonus.

Whole Foods currently lists $99,000 as the average annual salary for it’s Store Team Leaders. But unless things have changed a lot with Amazon, that sounds low and probably isn’t including any bonus.

However, an independent grocery store owner’s pay can fluctuate quite a bit more than a corporate lackey such as myself.

After all, as the sole owner, there’s no corporation to back you up and if your store isn’t profitable for 1 or more fiscal periods, there aren’t hundreds of other stores making a profit to balance that out like there are with corporations.

Done right though, your earning potential could be multiple hundreds of thousands of dollars per year; maybe as high as $300,000/year.

But there’s a lot that goes into being able to make that kind of money. Things like the following can impact that dramatically:

Interestingly, there’s 1 business model that’s a hybrid of being a solopreneur and just another faceless employee for a large corporation.

That’s with a franchise.

A franchise such as the one offered by Grocery Outlet Bargain Market gives owner-operators the freedom and flexibility to run their own stores and keep a decent chunk of the profits while also giving them a certain level of corporate security and systemization.

I have a recent article that breaks down their program and whether or not it’s worth it. I go into everything from earning potential to how they split profits, including the 1 thing that would probably prevent me from wanting to do it.

But they do have some owner-operators making $300k/year, so for some, it’s a great opportunity.

Did I cover everything you wanted to know about whether owning a grocery store is profitable?

In this article, we took a look at the world of starting a grocery store and how profitable that might be.

We examined how grocery stores mark up products and what kind of bottom line profits are typical. We examined start-up expenses, typical costs, and even what expenses would typically show up on a P&L statement. And how unexpected things like a power outage might affect your perishable items if you don’t have a backup generator.

Ultimately, we answered the question of Is owning a grocery store profitable?

Continue Reading
link to How to Build a Grocery Display - Merchandising that Sells!

They might seem simple enough, but great displays can make or break a grocery store. So learning how to build a grocery display is one of the first things successful grocery store managers need to...