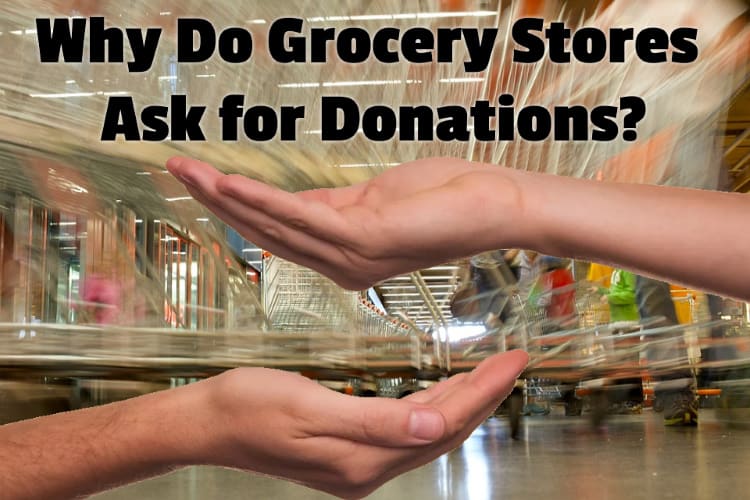 It seems to happen at every grocery store. A cashier asks you to donate a dollar or two when you’re just trying to pay for your groceries. So why do grocery stores ask for donations?

Here’s what I know from 2 decades in the business:

Grocery stores often partner with non-profit organizations that are aligned with the values of their target customer and the company itself. They may receive tax benefits too. But they also get the PR benefits that come from publicly giving back to the community.

But that’s just the beginning!

In this article, we’re taking a look at grocery stores and their requests for charitable donations.

We’ll look at why they do it and what to do and say if you’re tired of asking. But we’ll even get into what the best and worst regarded charities are out there.

That way you can at least put your money in the right places and where they align with your values.

What charity did you just donate to? Are they even reputable? Why do they ask you on the spot like that for donations! It’s so frustrating!

I have some tips to help you handle what to do in this situation.

Jayden created a donation drop box at her local grocery store for the animal shelter and delivers the donations weekly. #GirlScoutsGiveBack pic.twitter.com/qnzDM06hpM

Are you sick of being asked to donate at the grocery store?

It is super frustrating being asked to donate to charity when you’re just trying to purchase your groceries. And especially if you shop 1 or more times a week, it can get annoyingly repetitive.

You just spent an hour comparing prices on products and checking off things on your list. And even put back items that you either couldn’t afford or just thought were too expensive.

After all, you have a budget to stick to. Even if the store is trying to get me to buy 10 cans of tuna by putting them on sale.

In fact, you should read more about how stores entice you to spend more money, by reading this recent article on my blog. There’s a whole science behind how items are chosen to go on sale and how, despite getting discounts, you WILL spend more when you shop the sales flyers.

Just click that link to read that article on my site.

Now you’ve been asked to donate money to help feed the children. There is a line of people behind you, waiting to checkout. You have no time to really think about the charity. You’ve been put on the spot and you don’t like it.

The thing is, people love doing business with companies that give back.

They are more likely to support socially responsible businesses. (source) One easy way for grocery stores to give back is to partner with a charity and collect money for them at the register.

Just like with the placement of candy, magazines and other impulse buys, they ask at the register so you say yes without much time to change your mind.

I go into more detail about the psychology behind how your grocery store is laid out in this recent article. Just click that link to read it on my site.

Are you unsure about where your money is going when you’re asked to donate at checkout? Today, we’re breaking down point-of-sale donations on our blog, check it out. https://t.co/eZlligdwdo pic.twitter.com/TglKCMk1La

What to say when you don’t want to donate?

Love it or hate it, asking for money at the checkout is very effective at collecting donations. As a result, charities are going to keep doing it.

It is perfectly acceptable to give a polite, “No, thank you” when you don’t feel comfortable donating.

Also, think about it from the cashier’s standpoint.

You’re possibly one of the dozens of people they will ask in a single day. It gets old for them too, so they certainly aren’t going to pressure you to donate or give you a hard time if you say no.

Donations can be very personal decisions.

People who donate regularly have typically researched the charities as well. And considering there are so many scams out there, it’s perfectly reasonable to do so.

How much of that dollar will actually get to the recipient of the donation? How does it help? Is this even a real charity? There is simply not enough time to thoroughly investigate when you’ve been put on the spot.

It’s OK to say no at the register. The cashier will not judge you. Lightning will not strike you down. You are not a bad person.

Get down to the grocery store and grab a basket of items to donate to a local drive. #Thanksgiving #GiveBack #Giving #KindnessMatters It’s easy peasy #love #SaturdayVibes pic.twitter.com/kffBXFS2fV

You can deduct charitable donations, but the donation has to be to a recognized 501(c)3 charity, like the American Red Cross. And in case you get audited, you’ll need some sort of receipt or confirmation of the donation.

Without that receipt, chances are you won’t even remember to deduct it, and if you get audited, you’ll have no way to prove to the IRS that you even donated.

Hint: that’s bad for you!

But, if the donation is to send your local high school marching band to band camp, it is not tax-deductible.

You also need to make sure you didn’t get anything in return for the donation. If you bought a raffle ticket or got discounted tickets to an event, it likely won’t be tax-deductible.

Unless you regularly itemize your taxes and spend a lot of money on donations, it’s probably not really worth claiming grocery store donations.

Also bear in mind that under the Tax Cuts and Jobs Act, the amount you have to list on your itemized deductions just got a lot higher to get a tax deduction on charitable donations.

So it has gotten harder to write off charitable contributions, but it can still be done.

Not sure if who you donated to is a 501(c)3 charity? The IRS has a free tool where you can do a search and check.

Throughout August, @ajsfinefoods shoppers can make a donation to AHS’ homeless pets at checkout at any AJ’s location! With your support, we can provide starved, neglected and abused animals with food, shelter and critical medical care. More: https://t.co/tUciOkcbIi pic.twitter.com/ixxVlqlneo

Do grocery stores get a tax deduction for donations?

Maybe, is the short answer.

The PATH Act (Protecting Americans from Tax Hikes) took effect in 2015. Under it, all businesses became eligible for an “enhanced tax deduction for donations”. They just have to meet certain criteria.

Ultimately, though, the IRS gives the tax deduction to whoever has the receipt.

So if you donate at the register and that’s printed on your receipt, unless the store is doing some sort of matching, they likely can’t claim any deduction.

But if you just plop a dollar bill in a container, while it’s possible they just give that container to the charity, they might also tally all the donations up and take a deduction.

Even if they are just donating food, they can still claim a more general tax deduction for the amount they paid for the food. The law was originally designed to be an incentive for grocery stores to donate more of the food they were throwing away.

Beyond asking you for donations, many grocery stores also donate unsold food to local food banks and other organizations. But sadly, there is still a TON of food that gets thrown away every day from grocery stores.

Head over to this article where I talk about what grocery stores do with unsold food and look at the sad truth about many chains. Just click that link to read it on my site.

The next time you’re at the grocery store, please remember that we are collecting candy for our Trunk or Treat event! 🍭 🍬 You can drop off candy donations to this collection box in the office. Thanks for the help, Broncos! 🎃 pic.twitter.com/xv19yIzfkd

What are the worst charities to donate to?

People like donating to charities because it makes them feel good to do so.

As a result, charities are booming. Unfortunately, not all charities treat our money they way we would expect them to. Oftentimes, this means money is going to CEO bank accounts, being mishandled or misappropriated in some other way.

According to Consumer Reports, good charities spend at least 65% of their expenses on their charitable programs, and no more than 35% on fundraising or administrative costs (ie: big salaries for those in charge), among other things.

Here are just a few of the worst charities to donate to, according to Consumer Reports, that you may see at the register:

What are the most reputable charities?

Not all charities are trying to line the pockets of their CEOs, though.

To learn more about the best and worst charities to donate to, take a look at Consumer Reports, Charity Navigator or Charity Watch.

While Whole Foods may ask for donations at the register occasionally, you can rest assured that they fully vet the community-based non-profit organizations they work with.

Those partners have to meet certain eligibility guidelines and be a registered 501(c)3 organization in the US.

Did I cover all you wanted to know about donating at the register?

In this article, we took a look at why grocery stores ask for donations.

We discussed the reasoning behind asking at the register and how to say no if you don’t want to donate. We also looked into whether grocery store donations are tax-deductible. And we went over some of the best and worst charities to donate to.

Ultimately, we answered the question of why grocery stores ask for donations at the register.

People usually want to feel good about making donations. Being asked to donate on the spot may not feel good.

But now you have to tools to decide in advance. If you’re still uncomfortable donating at the register, just say no.