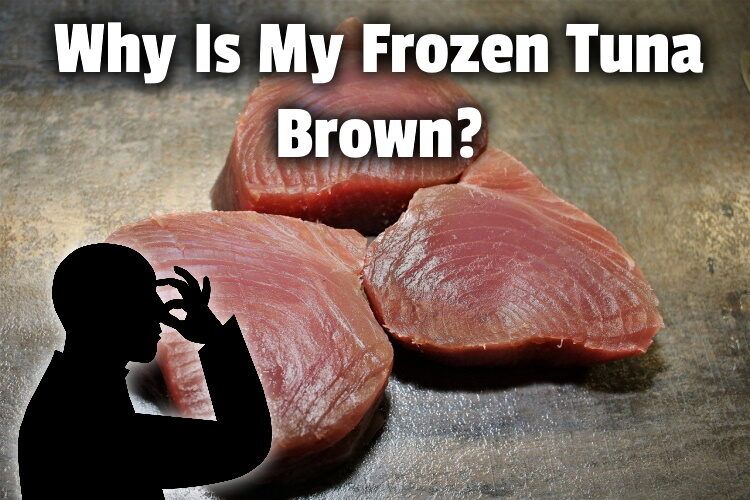 Tuna is usually reddish or pinkish, right? But sometimes, freezing a product does affect the color. So, you may have wondered “why is my frozen tuna brown?”

Tuna turns brown after it has been frozen because of oxidation. This exposure to air naturally darkens the color. To retain the original color, it must be frozen below -22 degrees Fahrenheit.

Its normal bright red color is due to myoglobin, the oxygen-storing pigment which is essential for the fish’s highly mobile existence.

Fish myoglobin is highly susceptible to oxidation when it changes to brown metmyoglobin, especially at freezer temperatures above -22 degrees Fahrenheit.

But there’s a lot more to know. In this article, we’ll find out how to detect if frozen tuna is bad and if it’s okay to eat if it turns brown. We’ll also find out what color is bad tuna and more.

How Fresh are your Tuna Steaks?
Never frozen fish is what we give you.. And if you’ve ever wondered.. Yes its totally safe to freeze and thaw only for immediate https://t.co/IoGXlaKFGl not refreeze❌
Fresh Yellow-Fin Tuna Steaks 🥩 available kes 750/Kg
🤙0792505240#fishways pic.twitter.com/CuzIyDurlX

How do you know if frozen tuna is bad?

There are three main ways to know if frozen tuna is bad.

First, if the color is off, perhaps it has turned inordinately dark and has lost its reddish or pinkish hue. Second, if it smells fishy. A sour, ammonia-like smell is a red flag. Lastly, if it has lost its firmness and is slimy to the touch.

In its natural state, freshly caught tuna is bright in color, reddish or pinkish, and turns brown soon after. But not dark brown. If tuna has turned dark brown, black, green, or yellow, it’s proof that it is bad.

Though it’s naturally reddish or pinkish, tuna is treated to remain so. In effect, the bright color alone is not an indication that the tuna is still good.

Second, tuna is not supposed to smell fishy. It should have a fresh, sea-air smell. So, any unpleasant smell is another sign that frozen tuna has gone bad. One could argue that this is the most vital way to know if tuna has gone bad. Smell it.

Finally, it should be firm and fresh. If you felt something slimy, toss the fish.

Top photo is our sushi spot delivering fresh tuna to your door at R180/kg. Bottom is frozen tuna at Woolies at R500/kg. DM me if you in CT keen to get stuck in… pic.twitter.com/0HLsFpvElG

Is tuna OK to eat if it turned brown?

As a general rule, tuna that has darkened in color but still retains a reddish hue is safe to eat. However, if it has no reddish hue whatsoever and is just dark, it would be best to discard and not consume.

Even though it’s reddish or pinkish after it’s been caught, because it oxidizes quickly, tuna turns to brown, naturally. So, it is still safe to eat.

In fact, the reddish or pinkish color it retains is artificially induced by wholesalers who treat it with carbon monoxide because they know that folks would associate the bright colors with freshness and are more likely to buy.

That said, if tuna has turned dark brown (has lost the reddish or pinkish tinge), it’s best to discard it. It’s one of the signs that it has gone bad.

Say you’re in the market for tuna and aren’t sure if you should buy white tuna or yellowtail tuna.

And I shared info on the type of tuna that is used for sushi and whether yellowtail is expensive.

Just had my feed of fresh-never-frozen blue fin tuna at Dora-Q! Get it today while you can! They’ll be freezing it soon. pic.twitter.com/RdoMULSW2u

What color is bad tuna?

Bad tuna will usually have dark brown streaks. These streaks may even appear black. They will be obvious discoloration running through the meat of the fish. At times, the tuna might also turn yellow or green.

After it’s been caught, gutted, cleaned, and frozen, good tuna would appear reddish or pinkish (it’s been treated). Left untreated, it would appear brown. So, if it turned brown, it is still okay. Even though it is brown, it will still have a crimson tinge.

But if it has dark brown streaks or discolorations or turns green or yellow, that’s proof that it should be discarded.

In a recent article I published, I got into whether it’s okay to eat Trader Joe’s ahi tuna raw. I began by sharing info on whether Trader Joe’s sells sushi-grade fish and if frozen ahi tuna is good for sushi.

Can you get food poisoning from frozen tuna?

It is possible to get food poisoning from frozen tuna as freezing kills some bacteria and parasites but not all.

Scombroid poisoning is an example. It is triggered when bacteria have grown during improper storage of the fish. Consequently, the bacteria produce scombroid toxin or poison.

The appearance, smell, and taste of infected fish may be normal, and the toxin is not eliminated by freezing or cooking. Scombroid poisoning can be uncomfortable and scary. Fortunately, it can be easily treated.

Bacteria act on the meat of the fish and form histamine, the chemical that causes allergies and allergic reactions.

When affected fish is eaten, histamine enters the bloodstream triggering unpleasant reactions. This is why antihistamines are used in controlling the symptoms.

They include a combination of flushing and rash on the face and upper body, sweating, diarrhea, vomiting, and abdominal cramps.

The symptoms appear quickly, within 15 minutes to 2 hours after eating the fish. The following are the type of fish that are more susceptible to scombroid poisoning. Tuna, mahi-mahi, mackerel, amberjack, and herring.

To reduce the odds of experiencing scombroid poisoning, it is best to keep fish refrigerated from the time it is caught to the time it is ready to be consumed.

And when ordering or eating fish at restaurants, be aware of those that are likely to cause scombroid poisoning.

fresh – not frozen , tuna steak , small catch , direct from us on the boat pic.twitter.com/gqkO7yeQ8n

What color should frozen tuna be?

Typically, frozen tuna is reddish or pinkish in color because the seafood industry treats tuna with carbon monoxide so that it maintains that color during the freezing process. But fresh-caught tuna that is frozen by the fisherman would be brown with a reddish hue.

They figured rightly that the color makes it more attractive to buyers.

So, the bright red or pink that many associate with tuna is artificial because about an hour after it’s been caught, gutted, cleaned, and frozen, tuna starts turning brown, naturally. (Known as “chocolate” in the industry).

The change in color is natural and is not an indication that it is in any way undesirable.

But fishmongers, knowing that red or pink are more attractive than brown, treat their tuna so that it doesn’t turn brown. They correctly sense that most buyers would associate red or pink with freshness.

It is doubtful whether this practice of lacing tuna with carbon monoxide is legal in the U.S., but most fish are imported from Asia, where the practice is kosher. Retailers in the U.S. simply buy it already treated.

As of the time of writing, there are no health concerns associated with the practice.

Check out a recent article I published. In it, I explained what kind of fish is sushi-grade and if you can use frozen fish for sushi. But I also revealed if there’s a difference between sushi-grade salmon and regular salmon. I even shared info on whether it’s okay to use Costco fish for sushi.

In the article, we explored how to know if tuna has turned bad and if it is okay to eat when it has turned brown.

Then, we looked at the color of tuna when it has gone bad.

We found out if one can get food poisoning from eating tuna. Lastly, we wrapped things up by considering what color should frozen tuna be.

link to Can You Freeze Tuna to Make It Sushi-Grade?

Continue Reading
link to How Do You Know if Frozen Tuna Is Bad?

Lots of tuna is previously frozen. And sometimes, we just toss it in the freezer to thaw and use later. But can it go bad, and how do you know if frozen tuna is bad? As a general rule, if frozen...