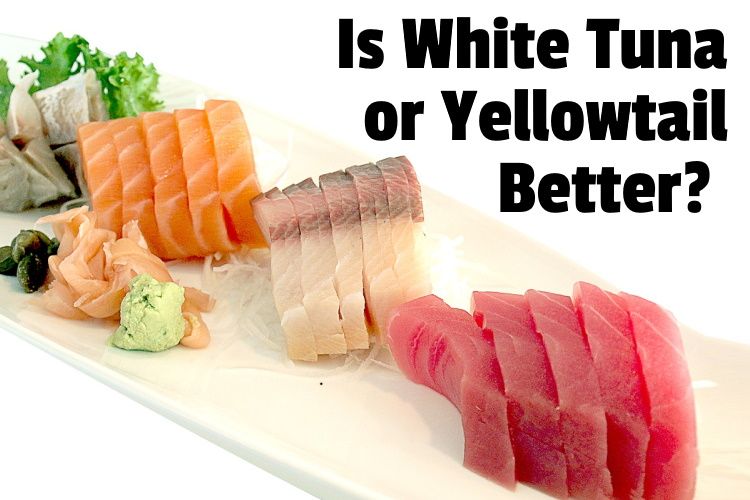 I love both poke bowls and sushi. And tuna is my favorite with both of those. But there are so many different kinds of tuna. So, I wondered, is white tuna or yellowtail better?

Here’s what I have learned over the years:

Yellowtail, sometimes called Hamachi, is a superior flavored fish to white tuna and is widely used for sushi in Japan. However, yellowtail is not actually tuna but a type of jackfish. White tuna is most often albacore tuna and is commonly used in higher-end canned tuna.

But we’re just getting started.

Which tuna is the best tasting?

White tuna (albacore) is the best-tasting canned tuna. For raw or seared tuna, the best choices are bluefin, bigeye, or yellowfin tuna.

So there are 2 answers because canned tuna and what you might order at a sushi place or poke place are totally different.

After all, while albacore is considered the best for canned tuna, I’ve never seen it offered raw.

I did give you 3 choices for raw or seared tuna though. That’s because where you live, you might not find all 3 of those on the menu. But any of them will give you a great experience.

Having said that, when it comes to sushi, bluefin is the preferred species by many high-end restaurants.

It is big and highly marbled (it’s got interspersed fat), and its flavor is to die for. Some bluefins weigh as much as 400 lbs. On average, bluefin from Japan could sell for as much as $200 per pound.

What about ahi tuna?

I’m glad you asked. Ahi tuna typically refers to either bigeye or yellowfin, so if that’s how you see it on the menu, go for it. It’s a good quality tuna.

And maybe you’ve noticed that Costco sells ahi tuna. Is it sushi grade?

What is the difference between white and yellow tuna?

Let’s check out each species to tease out more differences.

White tuna (albacore), also known as bonito del Norte, goes by the scientific name of Thunnus alalunga. It has a fusiform (spindle-shaped) body and is defined by the length of its pectoral fins.

Its sides and belly have a silver color, while its back has a metallic dark blue color.

Between the back and the sides lie iridescent blue. White tunas are born in the Sargasso sea. After their first year of life, they begin their migration to the Azores, Madeira, and the Canary Islands.

In the second year, at the end of spring, they migrate again in search of food, reaching the Bay of Biscay. At this time, they are about 1.5 feet in length.

In autumn, they return to their place of origin.

This migratory pattern is repeated over two more years, at which time they reach sexual maturity and become solitary.

They become mature when they are about 16 inches long. Some reach up to 80 inches.

They have to swim continuously because they lack a mechanism that facilitates the flow of water through their gills. If they were to stop swimming, they would die of anoxia.

These are the key differences between white and yellow tuna.

Trader Joe’s sells ahi tuna, but are you sure of its quality? Can you eat Trader Joe’s ahi tuna raw? Does TJ sell sushi-grade fish? And is frozen ahi tuna good for sushi? I explored these themes and more in a recent article.

Days are getting longer and warmer, the sun is already beginning to climb higher in the sky… Let’s celebrate the spring time with something light, healthy and colourful: Yuzu #Sushi Set featured Salmon Avocado Tobiko & #YellowTail, #Salmon, #Tuna Nigiri. Photo by Cook and Pour pic.twitter.com/hWDLoF8vUU

What’s the difference between yellowfin and yellowtail tuna?

Yellowfin is a species of tuna that’s most commonly used for both sushi and seared tuna. Yellowtail is not tuna but instead belongs to the jack family but is still widely served at sushi restaurants in Japan.

So despite the similar names, yellowtail isn’t actually tuna.

It breeds all year-round, and it associates with dolphins and other tuna species such as skipjack and bigeye. The largest school of yellowfin is found in the Pacific Ocean from Chile to California. They migrate a lot and can live for up to 7 years.

The yellowtail’s scientific name is Seriola quinqueradiata. It’s known as hamachi in Japan, where its farming is a huge venture for local consumption and exports.

They are a highly regarded delicacy over there and are the key ingredient for sushi.

They are recognized by a yellow stripe across their body and on their tail, hence the name. The largest ever caught weighed 213 lbs, and the longest was 8 feet long.

I was looking forward to have today’s #Dinner. That was because I bought #yellowtail fish gills by a cheap price at last night.😋 It was delicious to be included fish fat as much as I expected. Soup which was made from the fish was the best.#晩ごはん #ブリカマ #おうちごはん pic.twitter.com/ujiMObkHJn

It’s important to say again that yellowtail does not belong to the tuna family.

It’s expensive because it is one of the tastiest fish. It is lean, with a mild flavor. It has a high-fat content and is abundant in Omega 3 fatty acids. It’s also a good source of vitamins and minerals.

Check out a recent article of mine where I answered the question and related ones, such as whether supermarket fish is safe for sushi. I also showed how to go about buying fresh fish for sushi.

What type of tuna is used in sushi?

Bluefin is the best when it comes to tuna for sushi.

It’s the gold standard. Sushi, as you know, is a part of Japanese cuisine. The bluefin is supreme in sushi lore. It’s the largest and is expensive. It’s known as kuro-maguro to the Japanese.

It can be found in the Atlantic Ocean and the Mediterranean Sea.

It can weigh from 600 to 1000 pounds! It is an exquisite blend of fat and proteins. Naturally, it’s the tastiest.

And it’s almost as if it melts in one’s mouth.

The southern bluefin is similar to the bluefin, but it is fattier and can only be found in the Indian ocean.

It weighs about 550 lbs and is known as Minami-maguro, “Indian Tuna”, a reference to its Indian ancestry. It’s often the go-to tuna during the summer months because India is relatively closer to Japan.

The big eye is the deepest swimming tuna and can be found in the Pacific, Atlantic, and Indian oceans.

They are leaner than bluefin and are known as mabachi-maguro.

After bluefin, bigeye is the next most commonly used tuna at high-end sushi restaurants.

It’s also worth repeating that if you see “ahi tuna”, it is most likely bigeye or yellowfin tuna.

Yellowfins are named after their yellow coloring. It is light, lean, and inexpensive, and known in Japanese as Kihada. They are found in the Pacific, Atlantic, and Indian oceans.

Because it’s available in large quantities and is affordable, it’s used in a lot of restaurants and sushi bars. It’s also canned.

You’re in luck because a recent article of mine answers the question and more. I explained what happens when you eat raw salmon and whether freezing salmon kills parasites.

In the article, we checked out the best-tasting tuna fish.

That way you can make sure and get the very best fish from your grocery store to make sushi at home!

Image by louis papaspyrou from Pixabay

link to Can You Eat Raw Tuna Steak from the Grocery Store?

I love seared ahi tuna. But sashimi is awesome too! And while I know most grocery stores do sell tuna steaks, I wondered, can you eat raw tuna steak from the grocery store? Here’s what I...