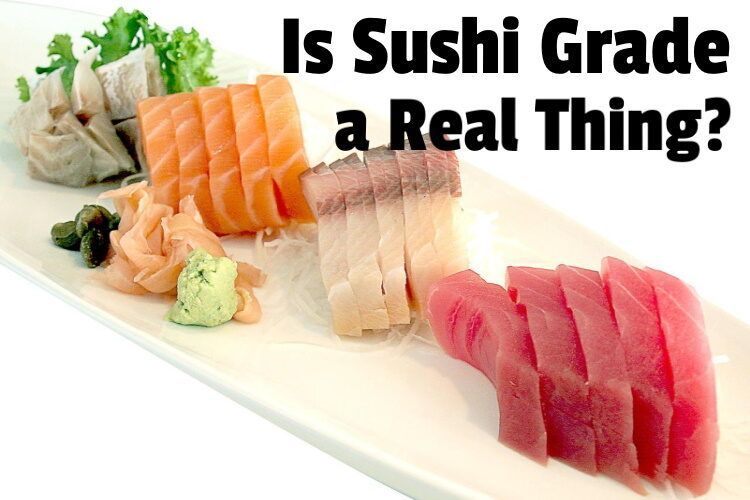 I bet you’ve heard the term “sushi-grade” before, especially if you have ever wanted to buy fish to make sushi. But is sushi grade a real thing?

Generally, “sushi grade” is not a real thing. It has no official governmental definition. It is a marketing term used for fish that is deemed safe to be consumed raw. It presupposes that the fish has been flash-frozen per FDA guidelines, but there is not a regulatory agency that monitors those claims.

In this article, we’ll find out what makes a piece of fish sushi-grade and how to make regular fish sushi grade. But we’ll also find out if sushi grade means raw and other riveting facts.

What makes a piece of fish sushi grade?

A piece of fish that is sushi-grade is a fish that has been flash-frozen soon after it was caught while still on the fishing boat.

This is to curtail the possibility that it could trigger parasitic infection because some species of fish are highly susceptible to parasites.

The FDA and the USDA do not have strict regulations regarding fish to be consumed raw.

When labeled sushi-grade, it is safe to assume that the fish has indeed been flash-frozen per FDA’s “parasitic destruction guarantee”, which prescribes that fish meant to be consumed raw must have been flash-frozen in the following manner to minimize the risk of parasites:

That said, I’d be remiss if I fail to say that fish labeled “sushi-grade” is not certified 100% safe. Truth be told, it’s a marketing term employed by fishmongers because no legal or governmental oversight ensures that fish labeled that way is indeed safe to be consumed raw.

Now, all fish that restaurants sell to be eaten raw is sushi-grade, and if you’re making the sushi yourself, you want to eat it the same day or ensure the leftover is left in the fridge for not more than a day.

Did you know that the Market is one of the only places in Cleveland where you can get sushi-grade fish?

Try making your own sushi favorites at home with high quality seafood from @KatesFish ! pic.twitter.com/T1P1ljtf4I

How do you make regular fish sushi grade?

To make regular fish sushi-grade, it needs to be frozen at (or below) -4°F (internal fish temp) for at least 7 days. However, because of the potential health risks, it is best to buy sushi-grade tuna from high-end fishmongers.

If you still prefer to do it yourself, wrap the fish in moisture-vapor-resistant paper or freezer bags, label, and freeze. Alternatively, you could place the fish in a shallow metal, foil, or plastic pan.

Then, cover it with water and freeze. To prevent evaporation of the ice, wrap the container in freezer paper after it is frozen, label and freeze.

Label the paper or bag. You could write the type of fish, quantity, date, and time of freezing.

It’s easy. But the steps above naturally presuppose that the fish has been gutted, cleaned thoroughly, and cut into smaller pieces. And that you can freeze the fish at (or below) -4°F (internal fish temp) for at least 7 days.

Want to know more about what differentiates sushi-grade fish from regular fish?

Found sushi grade tuna at Aldi so I fixed raw fish at home for the first time. It was really good! pic.twitter.com/dlJrJwXI15

Yes. Sushi grade is commonly used to refer to fish that is safe to be consumed raw, having been properly frozen while still on the fishing boat. However, there is no reason a piece of sushi-grade fish couldn’t be cooked or seared.

But there’s a difference between the term sushi and sushi-grade. Understandably, folks often assume that sushi is synonymous with raw fish.

It is vinegared rice, and it can be prepared with raw or cooked fish. Indeed, raw fish is a staple in many traditional settings, but it is not a prerequisite for sushi.

With what we’ve explored above, is it okay to eat raw salmon from the grocery store?

Thisis what I got into in a recent article I published. In it, I looked at whether it’s okay to eat raw fish from a grocery store and what happens if you eat raw salmon. I even shared what’s different about sushi-grade salmon.

Does sushi grade mean anything legally?

Sushi-grade does not mean anything legally. Essentially, it’s signifying that the fish is presumed safe to be eaten raw because it has been flash-frozen soon after it was caught per FDA guidelines.

As I explained earlier, these guidelines are designed to minimize the risk of parasitic infection, but they are not required by law. They are guidelines, and there are no legal requirements that guarantee that fish labeled as sushi-grade are wholly free of parasites.

It is an indication of the freshness of the fish and is understood as referring to the highest quality fish. But it’s an unregulated term.

Let’s face it, there are no fishmongers that are interested in selling fish that’s infected.

So, even though there is no legal backing, it’s okay to consume fish labeled “sushi grade” raw. There have been cases of parasitic infection in the U.S., but they are rare and negligible.

This is what I explored in a recent article I published. I looked at what makes fish sushi-grade and if sushi can be made with any fish. Then, I showed whether you could use store-bought salmon for sushi. But I also revealed the most common fish used in sushi.

I had a request for some sashimi grade salmon, which I sourced and prepared for a customer this morning.

If you’d like exceptional quality seafood prepared and cut to enjoy raw/sashimi/ceviche I am always able to help. Just DM or 07840244060

How is sashimi grade different from sushi grade?

Sushi grade and sashimi grade are exactly the same and have no differences. Both are marketing terms and have no legal definition, and both refer to fish that has been frozen in accordance with FDA regulations while still on the fishing boat.

They do not speak to any essential difference in the quality of the fish other than that they are presumed to be safe to be consumed raw because they have been flash-frozen after they were caught.

They are both “ratings” used to market fish but are not reflective of grading in the way that meat is graded. Both are, in effect, terms that show the fish is safe to be eaten raw. Some would argue that both terms mean nothing.

Instead of being labeled sushi-grade, these can also be labeled “for raw consumption” or “for sashimi.” Now, strictly speaking, not all sushi contains raw fish. Sushi is often made with raw fish and other types of seafood.

Sushi is served with rice, while sashimi is not.

Cucumber, eggs, and avocado are often used too. But raw fish is not always used. A key component is a vinegared rice.

Sashimi, on the other hand, is a delicacy made with fish or other meat. It means “pierced fish” and can be made with scallops, shrimp, yellowtail, mackerel, clams, and octopus.

So, is it okay to eat Trader Joe’s tuna raw?

In the article, we explored what makes a piece of fish sushi-grade and how you can make regular fish sushi grade. Then, we looked at whether sushi-grade means raw and if it means anything legally.

Lastly, we wrapped things up by looking at how sashimi grade is different from sushi-grade.

Image by louis papaspyrou from Pixabay

link to What is the Difference Between Sushi-Grade Fish and Regular?

You’ve heard the term sushi-grade so many times. But does it really mean anything or have any legal standing? And what is the difference between sushi-grade fish and regular? Here’s what I...