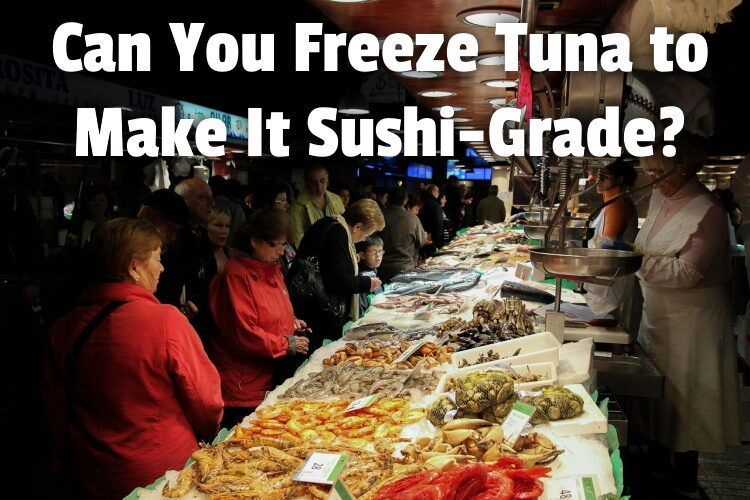 We know that tuna that is sushi-grade has been previously frozen. But if you buy it fresh, can you freeze tuna to make it sushi-grade?

As a general rule, home chefs cannot freeze tuna to make it sushi-grade, as sushi-grade fish is frozen immediately after being caught. However, purchasing farm-raised fish and freezing it at (or below) -4°F (internal fish temp) for at least 7 days does significantly reduce the risks.

However, because of the potential health risks, it is best to buy sushi-grade tuna from high-end fishmongers.

But there’s a lot more to learn. In the article, we’ll explore riveting issues around sushi-grade tuna, whether freezing kills off parasites and more.

Can parasites in fish survive freezing?

As a general rule, parasites in fish such as roundworms and flukes can survive freezing even if fish is preserved at the right temperature and stays that way. But freezing is an effective way to kill tapeworms.

Freezing is still one of the best ways to stave off the harmful effects of parasites. However, its effectiveness varies.

Tapeworms, roundworms, and flukes are the most common parasites that infest undercooked or raw fish. In general, parasites are dangerous to humans because they cause diseases.

Some of these diseases can be easily treated, while some are not.

Now, roundworms and flukes are more tenacious even while under the scourge of intense cold, while tapeworms are easily contained. Freezing is not so effective when dealing with the former.

Not all parasites die when subjected to cold temperatures. Most simply go into “hibernate” mode, only to “wake up” when the temperature becomes warmer. It’s kind of like the cold-pressed “pause” on them. They can still be highly harmful when they have the chance!

The following are FDA guidelines designed to help stave off the harmful effects of parasites in raw fish. Fish may be frozen in either of the following ways:

Even though freezing does not kill all parasites, it’s effective in stopping their growth.

Then, you can ensure that fish is cooked properly to eliminate or reduce the risk of parasitic infection. Parasites are killed by cooking fish for 15 seconds at a temperature of at least 145 degrees Fahrenheit.

What about bacteria? Does freezing guarantee that fish is rid of bacteria?

How Fresh are your Tuna Steaks?
Never frozen fish is what we give you.. And if you’ve ever wondered.. Yes its totally safe to freeze and thaw only for immediate https://t.co/IoGXlaKFGl not refreeze❌
Fresh Yellow-Fin Tuna Steaks 🥩 available kes 750/Kg
🤙0792505240#fishways pic.twitter.com/CuzIyDurlX

Freezing does not guarantee that tuna is free of bacteria or parasites. Freezing at the right temperatures can only slow down the growth of bacteria; it does not kill them. It is only cooking or pasteurizing that can kill bacteria.

That said, freezing is still incredibly helpful because it reduces the number of bacteria. It inhibits their growth. They cannot reproduce, and this in itself is good, but the bacteria can spring back to life and multiply when the temperatures become conducive.

Commercial freezers can be intensely cold.

These can kill some bacteria, but home freezers cannot because they are not cold enough, as they are not designed to reach below 0 degrees Fahrenheit.

With what we’ve explored above, this is what I got into in a recent article I published. In it, I looked at whether it’s okay to eat raw fish from a grocery store and what happens if you eat raw salmon. I even shared what’s different about sushi-grade salmon.

I’m craving sushi, but during Quarantine I don’t know how fresh it would be. I do have some ahi tuna in the freezer. Maybe I’ll make black sesame crusted ahi on the grill tomorrow. Hopefully no coyotes. Can you tell I’m hungry at 1:30 am😂#sushi #QuarantineLife pic.twitter.com/cuV3Iua9oZ

How cold do regular household freezers get?

Most household freezers can only go as low as 0°F (−18°C). However, this may vary depending on the brand. For example, some chest freezer brands allow temperatures as low as −9 °F (−23°C).

Depending on the brand, a regular household freezer may need to be set higher or lower depending on where it is placed and other factors. In some cases, you may want to set it high for a while and then reduce it later.

But, the recommended freezer temperature to keep your food safe is at or below 0°F (-18°C). At this temperature, bacteria cannot grow, and food stored cannot produce toxins.

In setting your freezer, “1” is the warmest, while “7” is the coldest.

If you want to shut off the compressor, set the temp dial to “OFF”. Ideally, set the dial to “4”, and after 24 hours, set it to your desired temp.

Today’s lunch at my work place

How long should you freeze tuna to kill parasites?

The above shows that not any tuna can be used for sushi or sashimi. You cannot just buy any tuna and proceed to eat it raw! Unless you can freeze it at (or below) -4°F (internal fish temp) for at least 7 days.

Virtually all living organisms (fish included) harbor parasites. And because they are not visible to the naked eye, one cannot be too careful.

Frozen wild sockeye salmon packed with anisakis. Usually if you cook it, not a problem. Only sushi grade fish should be used to make sushi/sashimi as it has been flash frozen to kill the parasites. pic.twitter.com/gykdZe1kfo

How to flash freeze fish for sushi – step by step

Wrap the fish in moisture-vapor-resistant paper or freezer bags, label, and freeze. Alternatively, you could place the fish in a shallow metal, foil, or plastic pan. Then, cover it with water and freeze.

To prevent evaporation of the ice, wrap the container in freezer paper after it is frozen, then label it and freeze.

But the steps above naturally presuppose that the fish has been gutted, cleaned thoroughly, and cut into smaller pieces. And that you can freeze the fish at (or below) -4°F (internal fish temp) for at least 7 days.

This is what I explored in a recent article I published. I looked at what makes fish sushi-grade, and can sushi be made with any fish? Then, I showed whether you could use store-bought salmon for sushi. But I also revealed the most common fish used in sushi.

In the article, we explored whether parasites in fish survive freezing and what temperature kills bacteria.

Then, we looked at how cold regular household freezers get and how long you should freeze tuna to rid it of parasites.

Lastly, we wrapped things up by looking at how to flash-freeze tuna, step by step.

link to How Do You Defrost Frozen Tuna for Sushi?

Frozen tuna is always best for making sushi at home. But it feels wrong to defrost it in the microwave. So how do you defrost frozen tuna for sushi? The best and safest method for defrosting...