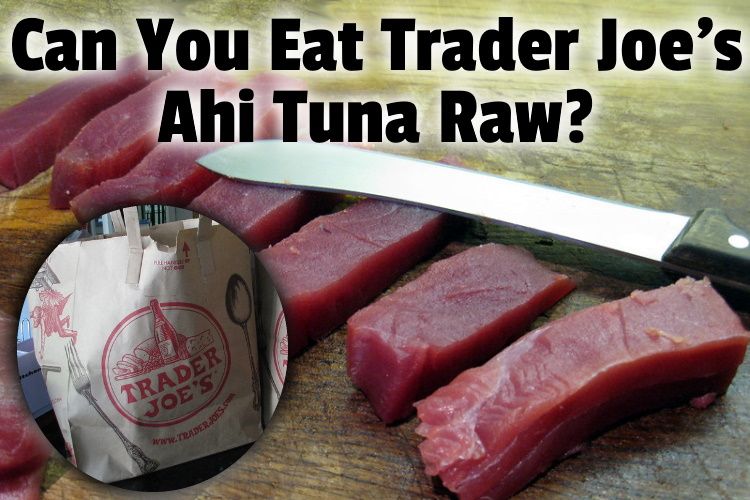 I love sushi and sashimi. I also love shopping at Trader Joe’s for both the quality and low prices. But I have wondered: can you eat Trader Joe’s ahi tuna raw?

Trader Joe’s sells wild sashimi-grade ahi tuna is technically designed to be consumed raw either for sushi or sashimi. However, their packaging only says “the perfect fish to sear” and does not mention eating raw. But that is probably an attempt to limit their liability.

So, yes, you can eat Trader Joe’s ahi tuna raw as long as the one you’re buying is labeled sushi-grade or sashimi-grade.

It’s undergone the process required to make it safe to be consumed raw. That means it’s been caught, cleaned, and frozen in short order directly on the boat after being caught.

It’s important to point out, though, that eating anything raw does have some risk of bacteria or parasites, and nothing is 100% fool-proof.

But what do you do for sushi or sashimi if it doesn’t say sushi-grade? Can you freeze it at home to kill any potential parasites?

Keep reading to find out!

Saw that @TraderJoesList posted about the ahi tuna at Trader Joe’s and had to make poke bowls 🤙 pic.twitter.com/tQlkWJZsvS

Trader Joe’s frequently sells sushi-grade fish, which are often labeled sashimi-grade. However, like many products in Trader Joe’s, they may not have it all the time at all locations.

Here’s what Trader Joe’s says about their sashimi-grade ahi tuna:

“These steaks are from Ahi (Yellowfin) Tuna averaging about 30kg (that’s about 65 pounds), fished in the cold Atlantic waters off the coast of Spain. The fish are caught on two boats from a single six-vessel fleet — we choose the best of the catch from each of the two boats — then cleaned, processed, and frozen aboard the vessel.”

What makes fish sushi-grade is that it’s been prepared in a manner that makes it safe to be eaten raw.

However, it’s important to point out this isn’t a federally regulated term.

As with the words “all-natural”, there isn’t an FDA regulation governing what sushi-grade or sashimi-grade means. Generally, though, there are some specific things that usually happen when fish gets labeled that way.

But ultimately, you’re trusting the brand or retailer claiming that.

Trader Joe’s ahi tuna meets this requirement because it’s flash-frozen on the boat shortly after it’s been caught.

Who says eating healthy has to be expensive?

All bought at Trader Joe’s with each meal coming out to about $6.75#SwoleOnABudget #WorkDontWhine pic.twitter.com/rSMLvLuYEO

Most ahi tuna used for sushi, even in fine-dining restaurants, has been previously frozen. For fish to be considered sushi-grade, it must have been frozen on the boat just after being caught and cleaned. This is to minimize the presence of parasites. Plus, it also helps to maintain its freshness.

I mentioned earlier that sushi-grade isn’t a federally regulated term.

But that doesn’t mean the FDA says nothing with regards to parasites and raw fish. They do have a page about it on their website. But mostly, it talks about the dangers, how to cook it properly, and how to freeze it to minimize risk.

So, the FDA doesn’t provide guidelines for determining which fish is sushi-grade and which isn’t.

But it has procedures in place that must be followed if fish is to be consumed raw. The procedures can be summed up by the term “Parasite Destruction Guarantee.”

“Parasite Destruction Guarantee” is to ensure the fish has no parasites before they’re eaten raw. It’s about doing the following:

The parasites are killed at these low temperatures.

But, to be effective, the process must start immediately when the fish is caught. For the process to work, they must be caught, bled and gutted, and frozen within 8 hours of leaving the water.

When the process of ensuring that Tuna is rid of parasites has been followed, it’s referred to as sushi grade. In effect, it’s safe to be consumed raw.

Trader Joe’s does not have a fresh seafood department in its stores. Thus, all fish, including their ahi tuna, arrives at the stores pre-cut and prepacked and is often previously frozen even if displayed in a refrigerated case at the store.

However, based on what some chefs say, when fish has been properly flashed frozen, it’s hard to distinguish the taste between previously frozen or fresh fish.

So, for now, it sells previously frozen ahi tuna in a refrigerated case and smoked ahi tuna.

As we’ve noted before, its previously frozen tuna (the one labeled sashimi-grade) is great for sushi. It’s Grade 1 Tuna, even if it doesn’t say so on the label.

And if you’re going to use fish from Trader Joe’s for sushi, that’s the one to get.

Why? A lot of folks complain that the quality of its fresh seafood leaves a lot to be desired. So, apart from the frozen tuna, your best bet is to make cooked sushi at home.

That can include things such as a tempura shrimp roll, avocado and cucumber roll, or a crab meat roll.

Is ahi tuna the best fish from Trader Joe’s for sushi?

Currently, only Trader Joe’s ahi tuna is labeled sashimi-grade, so no other fish sold there would be appropriate for sushi. However, as their products change, they may eventually sell other fish labeled as sashimi or sushi-grade.

This is not to suggest that other types of fish are unsafe for sushi.

If they’ve undergone the freezing process suggested by the FDA, they are. So, what I shared above is a situation where you have to choose, and you want the very best.

But only consider sushi made from fish labeled as sushi or sashimi-grade.

You may still want to know if you can eat Salmon raw from the grocery store. I explored this in more detail in a recent article of mine.

In it, I showed, amongst other things, that there’s no official regulation that determines “sushi-grade” and that it’s ultimately a grocery store’s responsibility to say if something is safe to eat raw.

Do you need sushi-grade tuna for seared tuna?

For seared tuna, always use sushi-grade or sashimi-grade tuna. It is typically cooked 1 ½ minute per side, which is not long enough to kill parasites. To cook tuna well enough to kill potential parasites, it needs to be cooked to an internal temperature of 145°F and then held at that temperature for 15 seconds.

As I explained before, “sushi-grade” is not a description of quality that has regulatory backing. So, it’s not a bad idea to always ask when you’re buying at a grocery store. Essentially, it means the highest quality fish that is safe to be eaten raw.

Why it’s good to opt for “sushi-grade” even when you’ll sear the fish is simply because the process of searing may not kill off all the parasites if you chose Tuna that’s not “sushi-grade.”

Seared fish is delicious. No doubt.

But, the inside of the fish, as you know, may not have received enough heat, as the outer part. In effect, the inside is relatively speaking still raw.

So, it’s safe to opt for Grade 1 Tuna, even if you plan to have it seared.

Ideally, you’ll use it soon after you buy or have it frozen, and then defrost when you’re ready. And, ensure that your utensils and related stuff to be used in its preparation are always kept in hygienic conditions.

If you also shop at Costco, you might be wondering if what you’ve read so far might be a tad different when it comes to the superstore.

Find out in a recent article of mine. In it, I shared the vital facts you need to know. Just click the link to read it on my site.

We looked at how safe Trader Joe’s Ahi Tuna is.

Can you eat it raw? Yes, you can. This is because its Ahi Tuna is ‘sushi-grade.’ In other words, it’s of the highest quality and has been prepared, processed, and frozen in a manner that meets FDA regulations.

And I’ll point out again that the terms sushi-grade and sashimi-grade have no legal standing.

Since that’s true, that means you should only buy fish for sushi from a source you trust, and you should have an understanding that even the best fish that is labeled sushi-grade still carries some risk of parasites.

So eat (and enjoy) at your own risk!

I also explained why you might want to consider its Wild Alaskan Salmon when you’re having a craving for sushi. We learned that TJ offers no fresh Ahi Tuna, and we wrapped up by considering why it’s smart to still buy “sushi-grade” fish even if you’re planning to have it seared.

Trader Joes Haul 2 007 by flippinyank and IXS_3952 by Leon Brocard are licensed under CC2.0 and were cropped, edited, merged, color-adjusted, and had a text overlay added.

Continue Reading
link to Is Sprouts Better Than Trader Joe's? (No. Here's why)

Both Sprouts Farmers Markets and Trader Joe's are known for mostly selling all-natural foods at low prices. But is one different or cheaper than the other? More specifically, is Sprouts better...