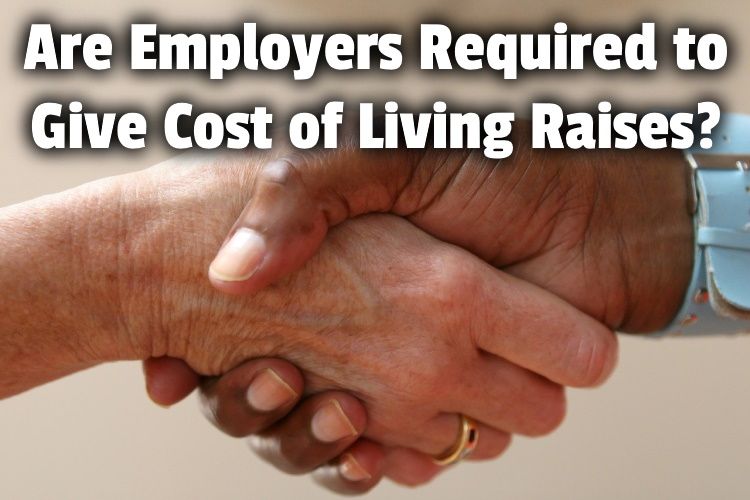 Inflation is a reality, and it would be awesome if we got paid a little bit more each year, don’t you think? But when our expenses go up, often our employer’s expenses do too. So, are employers required to give cost of living raises?

Here’s what I know from approving hundreds of raises over the years:

Employers are not required to give a cost of living wages. What the law expects them to pay is at least the minimum wage. The only exception would be in the case of a written employment contract that specified pay raises.

So you aren’t guaranteed anything.

In fact, in the last job I had before going full-time blogging, I hadn’t gotten a raise in 3 years. In this article, we’ll explore whether cost of living raises are required by law and how long is too long without raises.

But we’ll also look at what to do if you’re refused a raise and other riveting themes around getting a raise.

Just how high is inflation in the U.S. going to go? The yearly increase in the cost of living (CPI) is primed to top out close to 5% soon. It would mark the fastest gain since 2008 and easily outstrip the annual pay raise of the average American worker. https://t.co/kocmlBuesu pic.twitter.com/Q4rkg02s7w

Are employers required to give annual raises?

Employers are not required by law to give annual raises to employees. What is expected is that the employer pays minimum wage and overtime when the employee has worked for more than 40 hours each week (or over 8 hours per day in some states).

However, annual raises are not mandatory, they are discretionary.

Sometimes an employment agreement or contract or the employee handbook from the company spell out raises and the schedule they are given on.

In many cases, job reviews would be done on a set schedule, but that doesn’t have to include a raise.

There is no statutory requirement that makes it compulsory that the earnings be adjusted upward each year. Of course, an employer might, on their own, decide to put in place such a policy, but it is not required by law.

But, it’s vital to note that it does not apply to all employees. Exempt employees do not receive overtime even when they have worked for more than 40 hours each week.

But in most cases, if you are exempt from overtime and on salary, it would be because you are considered a manager who has the ability to hire and fire.

Got my cost of living raise today! Performance raise on deck. pic.twitter.com/1XNErdHCoy

Is it against the law to not give employees a raise?

It is not against the law to not give employees a raise. Raises are dependent on agreements between employers and employees and are not statutorily required or enforced. When an employee deserves it, it is fair that they should be given a raise.

However, the fact that something seems fair is not the same as being legally required.

The Fair Labor Standards Act stipulates that employees who are not exempt must be paid a minimum wage. The implication is that if the minimum wage is increased, an employer must pay employees this wage.

It would, in effect, be a “raise” which must be paid. But, apart from this, it is not against the law if an employer decides not to give a raise. Raises are usually negotiated between the employer and the employee.

And, in some cases, between the employer and the union.

Written offers of employment given to employees state the terms of the employment and, in some cases, the earnings and whether there would be increases over time.

The letter of employment is a contract.

If such an increase is specifically stated in the letter, it is against the law if an employer decides not to pay it.

Unless its payment is contingent on a condition that the employer has not met.

When was the last time you asked for a raise? Your boss won’t necessarily give you a raise out of the goodness of their heart. It’s up to you to ask. So what are you waiting for? #FinancialLiteracy #FinancialLiteracyMonth #careeradvice pic.twitter.com/JZiAzxYh12

How long is too long without a raise?

Most companies give raises at least once a year, so going more than 2 years without a raise could be considered an excessive amount of time. However, there is no definitive length of time to go without a raise.

And if the company is growing and successful, being without a raise after two years could be a cause for concern.

How often one should get raises depends on a couple of factors.

A person who hasn’t spent 6 months in a company has no business asking for a raise. They should be focused on doing their best in their role. But anyone who has been in a company for at least a year ought to ask if the company does not have a policy in place that ensures that earnings are increased from year to year.

As you know, not all years are profitable for a business.

So, it’s understandable that there could be years when there may not be an increase. In that case, the two-year guideline remains ideal. On the other hand, if it’s a business or organization that’s growing very well, and you are putting in your best day in day out, it’s smart not to let any year go by without asking for a raise.

Can you get fired for asking for a raise?

Interesting question if you ask me. Luckily, I explained in a recent article that in at-will states, an employee can be given the pink slip for any reason that doesn’t violate the law. Most employers won’t fire you for asking for a raise. But, I went on to share a caveat.

If a boss denies a raise, ask for feedback on what needs to be improved and specifically what improvements are needed to justify a raise. Ask for a timeframe in which to show the improvement and schedule a follow-up meeting after that date.

Ideally, you want to double your efforts and focus on contributing your best in the hope that 6 months or a year down the line, when you make a request again, it would be granted.

It’s smart not to be overly emotional about the rejection because your performance is not the only reason why an employer may reject your request.

The company’s financial health and the timing of the request are other vital factors.

Once you have feedback on why the request for the raise was rejected, you want to act on it. Even if it’s not related to your performance, you want to focus on ensuring that you are giving your best and that your interpersonal skills are top-notch.

You don’t want to be the super-efficient employee that nobody likes being around!

In summary: improve yourself, redouble your efforts to the company, and then ask after 6 months.

The SSA has released the 2021 #SocialSecurity wage base and the cost of living raise for Social Security benefits. Learn more: https://t.co/OlfHzVNsFb#socialsecurityupdate pic.twitter.com/fwnbZxrtMS

Why do employers not give raises?

Poor or mediocre work performance is the most common reason for a company to not give raises. But there are times when a company might be struggling financially or is financing a capital-intensive project and therefore may not prioritize giving raises to its employees.

Let’s look at some of the reasons why an employer may not give raises:

All the reasons above are self-explanatory. In a nutshell, you don’t want to be a toxic or deadbeat employee. Employers and managers want hard-working folks who get on well with others.

Folks who go beyond the call of duty, not those merely going through the motions.

You don’t want to be an “average” employee. If you’re exceptional, it won’t be difficult to get raises. You want to be so exceptional that you don’t ask for raises before management. Instead, on their own, they decide, “this is someone we must keep and elevate.”

Interested in working in a grocery store? Which one pays the best?

I showed in a recent article that Whole Foods and Costco (as of the time of writing) pay the best. They have a starting wage of $15 per hour.

It would be nice to get cost of living raises often, right?

Well, we learned in the article that they are not required by law. So, it is not against the law when an employer does not give them.

We also learned that there is no definitive length of time for asking for raises. But, if you’re not underperforming and have great interpersonal skills, you may not want 2 years to pass before asking for or not getting a raise.

Lastly, we looked at actions to take if the boss refuses a request for a raise and the reasons why they are often rejected.

link to What Grocery Store Pays the Best? (& has the best benefits)

I loved working in grocery stores. But when you're first starting out, it's not uncommon to wonder what grocery store pays the best? Here's what I know from 2+ decades of experience: Whole...

Continue Reading
link to Can an Employer Deny FMLA? (Maybe, here's how to know)

Many of us need time off occasionally to help family members with medical problems or for the birth of our child. However, certain requirements must be met for someone to be given FMLA leave. So,...