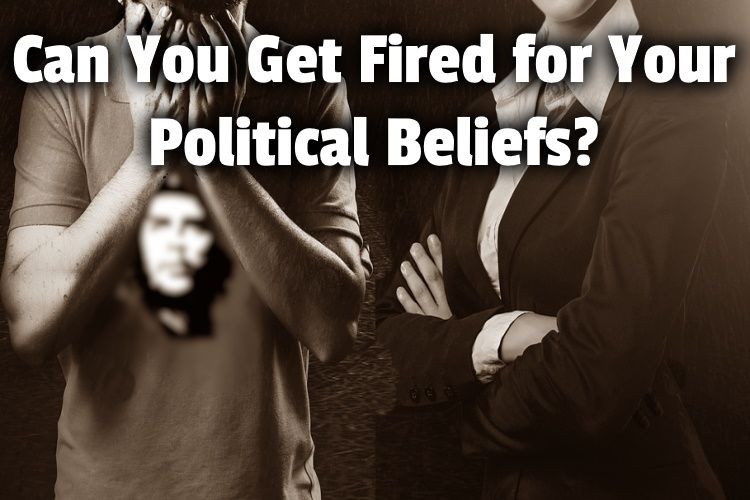 Here’s what I know from decades of HR experience:

One can be fired because of one’s political beliefs as there is no legal protection for expressing one’s political views. But in most cases, it would not be the viewpoint that leads to termination, but arguments or hostility that arise in the workplace because of those views.

An employer reserves the right to foster the kind of climate conducive to the benefit of their business.

And, they may well state in the employment handbook that certain activities, such as discussing political issues at work, are not allowed. It’s tempting to easily conclude that this is illegal. Is it?

You cannot hire only people that hold the same political opinions; a workplace diverse with people of different backgrounds and ways of thinking has been proven to be more effective.

But what if they speak out? Answer: https://t.co/aPAJJVobKE#officelife #hr #employer pic.twitter.com/YFYQ61D9Vb

What is political harassment?

Political harassment refers to the denigration, abuse, and harming of others because they subscribe to a different set of political beliefs or are affiliated with a different political party than the one the perpetrators are associated with.

It is not a one-off incident. Instead, it describes the ongoing torment of a political nature.

Political harassment is one of the ugly and harmful side effects of our inability to be truly inclusive. The essence of democracy is the negotiation and the recognition that folks are entitled to their viewpoints, that the collective fate of our nation would be forged through debates and free and fair elections.

Democracy respects the diversity of opinions.

This is what’s at stake when political harassment occurs — those who harass others want them to subscribe to their political worldview.

They do not want those who disagree. And, they resort to all manner of toxic psychological and physical behavior to bully those who hold opposing views.

In simple terms, political harassment is bullying people who do not share our political views. It’s childish and cruel.

Tensions can easily run high in the workplace in the current #political climate, but you can mitigate this by making sure you stay calm and avoid responding emotionally when debating opinions. 🙌 https://t.co/SEY2UiUa5T #productivity #work #respecteachothersviews #kindness pic.twitter.com/NU6c1bjoLO

Can you be fired for expressing an opinion?

One can be fired for expressing an opinion, as the first amendment protects the right to free speech from a governmental persecution perspective. If the employer feels the opinion creates a hostile work environment or defames the company, termination is a possibility.

Employees of private concerns can be fired for expressing opinions that are deemed damaging to their employer.

Unless the employees can prove that they are being discriminated against or that the opinions expressed count as whistle-blowing or attempt at union organizing.

In other words, in at-will employment, employees can be fired for any legal reason, even without being given a reason!

This seems unfair, but it works both ways. Employees can also walk off the job without giving any reason.

Yes, you can be fired for expressing an opinion.

But, unless it’s something offensive or extreme, most employers would probably disregard it. Your employment is likely to be terminated if you violated a specific policy in your employee handbook.

So, the key is to be smart and to imagine yourself in your employer’s shoes. Even you won’t want an employee who says stuff that creates a hostile work environment or casts the employer in a bad light.

If there’s a dress code where you work, you might also want to be careful about shirts with sensitive political messages on them!

So is an opinion the company doesn’t like mean you have a bad attitude?

And does a bad attitude put you at risk of being fired? In a recent article of mine, I get into exactly what a bad attitude is and isn’t and the 1 sure-fire way it can get you fired for speaking out.

Can you sue for being fired for political views?

Our sense of fairness is not enough.

Unless you’ve spoken to a reputable employment attorney and they’ve convinced you that you have a strong case (because there are some states and jurisdictions where the law might be a bit more favorable to you), it’s better to forget the idea of litigation when the expression of political views are involved.

It’s vital to note that if you work in an at-will state, your employer can fire you for virtually any reason, as long as it’s legal.

So, in trying to sue an employer, what an attorney would do is try and find exceptions to the at-will rule (which is not very easy, if you ask me).

If your employer can prove that you were not being discriminated against and that, in fact, the expression of your views was harming their business, your case could be thrown out.

Leaders must create a workplace environment where political diversity is not only appreciated but respected as well. Employees must keep an open mind during discussions, respect opinions of others & avoid passing judgments.#saivasystem #betterwork #betterbusiness #leadership pic.twitter.com/EUESEPYhwW

Is talking about politics at work illegal?

Talking about politics while at work is not illegal. However, talks about politics are often highly heated exchanges that can escalate into conflict. And while still not illegal, an employer would be within their rights to fire an employee for creating hostility in the workplace.

It is easy to create a hostile work environment when there is intense polarization across political leanings.

You can imagine how this impacts employee productivity and interpersonal relationships.

So, your employer has the right to limit talks about politics at work. They pay their employees to render a service or make a product, not to shoot the breeze.

It is not illegal to discuss politics, but the employer is within their right to place policies that foster a conducive atmosphere for all employees irrespective of their political leanings.

Can you get fired for gossiping?

Yes, in at-will states. Because it can be seen as creating a hostile work environment. This is the theme of a recent article of mine. But there is 1 crucial exception to that.

Can an employer ask your political affiliation?

You have a right to refrain from sharing your political affiliation if you are working for the government, as you’re protected by the First Amendment. “As a general rule, in the private sector, one’s political position is not a protected status.”

So, an employer can ask you.

It’s not illegal for them to ask you, but it really can’t be the basis upon which they would now discriminate against you. Most employers know the harm that could unleash. But, they have a legal right to ask you.

And of course, if you didn’t answer honestly, how would they know unless you regularly talk about politics, share it on your social channels, or wear political shirts?

It’s important to note that there are some states and jurisdictions where your right as an employee to protect your political affiliation is upheld.

Can an employer fire you over the phone?

That’s the theme of a recent article of mine where I showed that employees could be fired over the phone or via email, but only under certain circumstances is it really acceptable.

We explored many issues around getting fired for one’s political views.

We then moved on to look at whether it’s legal to discuss politics at work and if your employer can ask about your political affiliations.

We wrapped up with whether an employee can be fired for their political opinions.

link to Can You Fire an Employee for Social Media Posts?

Almost everyone uses social media these days. However, for employers, it's a tough call as sometimes employees' social media posts are either embarrassing or outright critical of the company. But can...

Continue Reading
link to Can I Get Fired for Asking for a Raise? (Maybe, here's why)