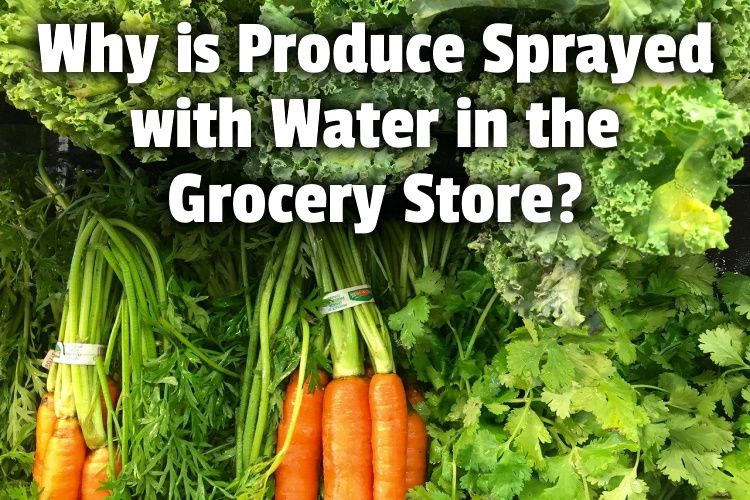 Here’s what I know from decades of experience:

Produce is sprayed with water to keep it hydrated and fresh. Without this “misting”, many types of vegetables would wilt and lose their crispness. But for items sold by the pound, the water does add a little residual weight which increases the store’s profits.

While in the soil, fruits and vegetables are hydrated naturally through osmosis since water is vital for some biological processes such as the transport and absorption of nutrients.

Once they have been harvested, they will lose their freshness, attractiveness, and crispness if they are not regularly sprayed with water.

But, some folks have also suggested that grocery stores do not only want to keep produce alluring, that “misting” them is a way to make as much money from them as possible. In truth, it’s a bit of both.

Let’s get into it!

The reason grocery stores spray water on their produce will blow your mind: https://t.co/RuSVG9nyro pic.twitter.com/aIUzVHzocJ

What is sprayed on produce in grocery stores?

Water is sprayed on produce in grocery stores to keep them fresh and attractive. While the misting system could theoretically be used with chemicals, all grocery stores traditionally just use water.

As we’ve discussed, certain types of produce naturally start to wilt the moment they get picked.

After all, they no the fruits and veggies no longer have a way of absorbing water naturally as they did when their roots were in the soil.

What are the most commonly misted produce items?

In some stores, this “misting” system is automated such that at preset intervals, a little volume of water is sprinkled on the fruits and vegetables.

In others, it’s done manually. Someone goes around regularly and sprays water on produce.

Now, not all produce is misted. Why? Some would spoil. You can’t spray onions and potatoes, for example. This is because they have skins that help retain water.

But, a veggie like lettuce would wilt if it’s not “misted.”

Whole Foods is the pioneer in the organic food movement, and folks would often joke that one needs a whole check to shop there. (At least pre-Amazon acquisition). Why is it expensive?

Seeing as I worked there as a leader for more than 20 years, it’s a question I could speak to. And, you can get the lowdown in a recent article of mine.

Customers shop the produce section of Sprouts during its grand opening on Carnelian in Rancho Cucamonga. pic.twitter.com/GAE0FqxcYq

Does spraying water on produce make them look crisp?

Spraying water on produce does make it look crisp. It makes it look fresh, tender and keeps any leaves from looking wilted and unappetizing.

When produce is sprayed with water, the concentration of water outside the produce is greater than the water inside the vegetables.

Gradually water would diffuse inside the cells through osmosis, making the produce fuller and less wilted.

If they are not sprayed with water, they will shrink in size. And while misting to increase the store’s profit isn’t the #1 goal, it does impact the store’s bottom line in 2 distinct ways:

Given a choice of picking produce that’s green and fresh (brimming with life) and one that’s dry and wilted, you’ll likely pick the former.

How do grocery stores keep lettuce from wilting?

At warm temperatures, lettuce will wilt and expire quickly.

All produce is best when picked ripe and then eaten within a few days. But modern grocery stores have changed that. Many times produce is picked across the country or even in other countries.

Then it gets packed in big trucks and shipped sometimes hundreds of miles.

If they are not placed in cold storage and kept wet, veggies such as lettuce would deteriorate days after they’ve been harvested.  The low temperature in the cold storage units helps slow down the growth of pathogens and consequently reduces spoilage.

The USDA has guidelines grocery stores are expected to follow.

“Lettuce should be quickly cooled and maintained as close to 0 °C (32 °F) as possible with 98 to 100% RH. Head types are better adapted to prolong storage than are the other types, but none keep longer than 4 weeks, and about half that time at 5 °C (41 °F). Film liners or individual polyethylene head wraps are desirable for attaining high RH; however, they should be perforated or be permeable to maintain a non-injurious atmosphere and to avoid 100% RH on removal from storage.”

How is it that Aldi can sell quality produce at affordable rates?

That’s the theme of a recent article of mine. Some people have speculated that it’s because all their stuff comes from China. But is that really true??

As a general rule, fruit may be washed by the grower before packing, but supermarkets do not typically perform additional washing at the store level. That is why washing all fruits and vegetables at home is typically recommended.

When they are harvested, most fruits have residues of contaminants such as dirt and pesticides on them. Because a considerable chunk of the fruits we buy are imported, they are washed before they are sent here.

After all, packing produce that’s dirty makes it riskier.

But not all fruits are washed. An article in Reader’s Digest has the following to say:

“Some literally come straight from the field to the grocery store floor. For example, there isn’t any sort of cleaning, sanitation, or processing of most berries before they hit a grocery case.”

So, you don’t want to take the risk of assuming that all the fruits you are buying have been pre-cleaned. But, even if they have been, the FDA says to wash fruits with water before they are consumed.

“Wash all produce thoroughly under running water before preparing and/or eating, including produce grown at home or bought from a grocery store or farmers’ market. Washing fruits and vegetables with soap, detergent, or commercial produce wash is not recommended.”

A lot of people swear by Sprouts. But are all their produce organic?

Check out a recent article of mine where I take an in-depth look at Sprouts and their products. What really surprised me was the amount of artificial ingredients they allow in their products.

If you are going out to get necessities, be sure to stock on fresh produce, too. Nourish your household with healthy, nutritious and whole foods! Reduce the consumption of sugar, oil and processed items for better wellbeing. pic.twitter.com/uYSuDws6x3

Grocery stores keep fruit fresh by storing them in refrigerated coolers in the back room both upon arrival and at night after the store is closed. However, some fruits and vegetables do not thrive when refrigerated, therefore they are left on the sales floor.

To appreciate why refrigeration is critical to keeping fruits fresh, we should remember that most fruits are seasonal. And fruits start decaying quickly after they’ve been harvested and yet we get them to buy fresh throughout the year.

This is only possible because of refrigeration technology.

Before they are refrigerated, some fruits are “treated.” Some apples are waxed to delay the slow down the natural process of deterioration and to make them look more alluring.

At times, some inorganic apples are coated with a soy protein mixed with pullulan (a polysaccharide polymer).

To many, this gives the appearance of wax.

Although, to be sure, not all apples are coated in pullulan. Sometimes it’s beeswax, Carnauba wax or even wood resin. To ensure that all their customers can get these fruits and veggies to buy, the stores buy them in large quantities, preserve them, and gradually make them available from big coolers in the back room.

You’re probably wondering how the process of storing them affects the nutrients and whether it is harmful.

Experts say the effect of the nutrients is negligible and that refrigeration is not harmful.

And they say the taste is also only minimally affected. Most of us can’t differentiate if we had to choose between a freshly harvested fruit and one that’s been refrigerated.

If you’d like a deep dive on how grocery stores keep fruits fresh be sure to check out a recent article of mine where I went into greater detail.

What are they being used for and why? In this article, we learned why grocery stores spray water on produce.  We found out whether spraying water on produce makes them crisp. Yes, it does.

Of course, only when done in moderation. It can be too much.

link to Why Is Aldi Produce So Cheap?

Many love to do their grocery shopping at Aldi, and it’s easy to see why. They have a great selection and amazingly low prices. But anytime we see something that seems too good to be true, it can...

Sometimes, the little things in life can be the most frustrating. One thing that people find irritating is opening plastic bags at the grocery store. Whether it's for meat, produce, or even regular...