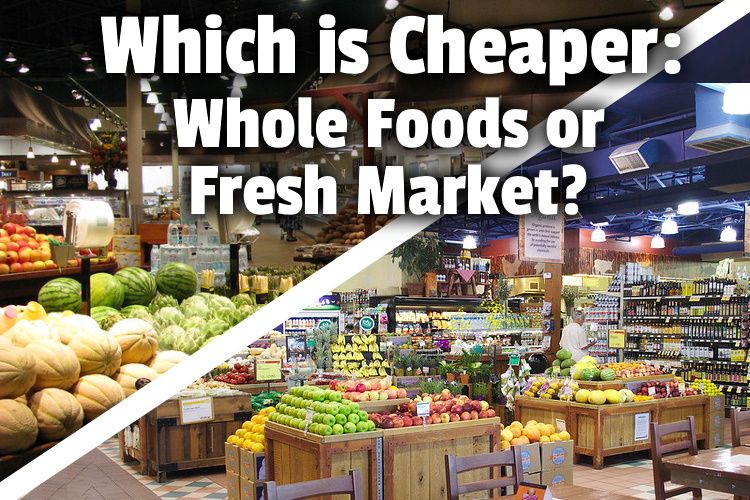 Whole Foods and Fresh Market have many similarities, from products, to shopper demographics, to store decor. But for many shoppers, even with gourmet tastes, they still want the best prices. So I wondered which is cheaper: Whole Foods or Fresh Market?

Here’s what I discovered doing a comparison:

After the Amazon acquisition of Whole Foods Market in 2017, Whole Foods is now equal to or less expensive than The Fresh Market, whereas they had been between 10-20% more expensive prior to that.

But that’s just a quick answer.

In this article, I’ll share interesting info about both upscale grocery chains. We’ll not only dive deeper into the price, but also quality, and rumors of stores closing for The Fresh Market. And it’s also worth confirming we are talking about the chain of stores that operates under the name The Fresh Market, as opposed to a Utah co-op that goes by the name of Fresh Market.

Let’s cut to the chase.

How much cheaper is The Fresh Market than Whole Foods?

So, post-acquisition, the differences have largely disappeared.

In fact, for a lot of products, there are no substantial differences, or WF’s prices are actually cheaper! If you’re a WF customer who’s considering The Fresh Market, it’s not really worth it. You will discover as you read on.

As most people expected, there have been substantial cuts in Whole Foods’ prices. Since it’s now an Amazon subsidiary, this shouldn’t be surprising. Price cuts come with the territory, right?

But why was Whole Foods Market so expensive? Interested in an inside scoop? That’s exactly what I looked at in a recent article of mine. I even wrote about when Whole Foods was legally accused of overpricing.

One perk of a ground-floor @WholeFoods is organic produce, fresh baked goods and prepared foods at your fingertips. No time for a trip to the store? Use our on-site refrigerated lockers for your @amazon Prime two-hour grocery delivery. #LiveCURV #WholeFoods pic.twitter.com/jNHcc90AAT

Does Whole Foods own The Fresh Market?

In fact, they’re competitors (with WF being Goliath, while TFM is David).

The Fresh Market was founded by a couple, Ray and Beverly Berry in 1982. This was after they returned from a trip to Europe and were inspired to start a store that has the aura and ethos of an open European market. The first store was opened in Greensboro, North Carolina.

In 2010, it raised $290 million in an IPO, and it started trading on NASDAQ. But six years later, its shares were acquired by Apollo Management Company.

It then became a privately held company and ceased trading on NASDAQ.

The Fresh Market has been experiencing some difficulties, while Whole Foods, on the other hand, is experiencing rapid growth and popularity.

Check out a recent article of mine, where I shared some “insider” info on why WF is growing impressively.

I worked at Whole Foods for over twenty years. One of the facts I shared is that it uses a simple yet effective strategy that’s like Starbucks’. Really?

The Fresh Market…by far the coolest grocery I have ever been in. My new favorite store. Anyone want to partner up? pic.twitter.com/g2Q6q0sRX8

Is Whole Foods still more expensive than The Fresh Market after Amazon bought them?

Whole Foods Market is no longer more expensive compared to The Fresh Market since Whole Foods was acquired by Amazon in 2017. One of the first decisions made after the acquisition was to drop Whole Foods prices by 20% across the board.

When Amazon bought Whole Foods (WF), many thought that the grocery stores’ prices would become more affordable. In fact, some were expecting very low prices.

So, what’s really happened? And, how do its prices compare to The Fresh Market’s?

Before the acquisition, folks would joke that you needed a “Whole Paycheck” to shop at Whole Foods. It’s not actually the case. But, the reality, then, was that WF used to enjoy an average premium of 10% to 20% (in some cases, 40% to 50%) on some products, relative to what one could get them for at similar chains.

Now, most grocery stores offer natural and organic products and at reasonable prices. In fact, on average, WF’s prices have gone down by 20%. According to Forbes.

This is substantial since, in many cases, the prices it offers and that of its competitors are now at par. In fact, in a lot of cases, relative To The Fresh Markets’, for example, the prices are lower.

Ultimately a lot of it is supply and demand, but also buying power. And Whole Foods beats The Fresh Market in both areas given how much larger and more popular a company Whole Foods is comparatively.

One of my favs, I took at one of field trip locations to Whole Foods for my Food Photography class. pic.twitter.com/hZSPZ0UJ

The Fresh Market has no plans to close stores in the future. However, they had previously closed 15 stores in 9 states in 2018 that were underperforming in sales and profits.

This begs the question: why were they closed in the first place? After all, most companies open new stores. Why would an organization contract when it should be growing?

Prior to the closure, the Fresh Market had been conducting a company-wide organizational analysis, and so the closure was a response to the intense competition in the grocery sector. It was trying to concentrate on profitable areas.

In fact, it was reimagining its value proposition to achieve a better fit and improve its profitability. Truth be told, the company was struggling.

It’s better to share what the company’s former CEO, Larry Appel, said about the closure.

“Over the last eight months, our company has been executing a turnaround plan, and we’ve seen great progress,”… “However, for a variety of reasons unique to each retail location, that progress is not evenly distributed and, as a result, we have decided to close these long-term, underperforming stores. We will work to relocate as many impacted employees as possible to other stores within our footprint.”

But it’s worth noting that Mr. Appel resigned and left the company at the start of 2020 as the closures hadn’t been enough to turn around the struggling grocery.

It’s also conceivable that a company could close some stores so it could concentrate on online sales. That would be a smart move, right? In fact, in a recent article, I looked at how grocery shopping is being affected by e-commerce.

Get a head start on that New Years’ health kick with Fresh Deals on some fresh finds! 🍎🍊🥑

Is the quality at Whole Foods better than The Fresh Market?

But beyond what’s in the products and how animals get treated, we also have freshness.

Because Whole Foods Market has more stores, larger stores, and a much higher sales volume, they are simply able to get better products faster, and they stay on the shelf a shorter period of time.

Please, don’t get me wrong.

The Fresh Market is decent, but WF is a lot better. The products at WF are fresher, and the environment is neater and more welcoming. WF has been singularly focused on its niche since it was founded 40 years ago, while The FM is currently reimagining what it stands for.

There’s also a wider selection available. And some WF stores even have bars and family-friendly locations. The chain has a mandatory GMO labeling policy and a policy on unacceptable ingredients in its food that suppliers need to meet.

Figures do not reveal everything. But, most of the time, they encapsulate some essential, even defining facts. So, consider that The Fresh Market sells $1.7 billion per year, while WF sells $16 billion.

The difference is clear.

Has Whole Foods prices reduced after it was acquired?

Yes, it has. In the preceding paragraphs, we looked at the quality and prices of Whole Foods relative to the Fresh Markets’.

We checked out why the Fresh market was closing some of its stores, what happened to WF’s prices post-acquisition, and we wrapped it up by looking at which grocery chain has better quality.

Fresh Market by NatalieMaynor and Whole Foods Market by Tyler Cipriani are licensed under CC2.0