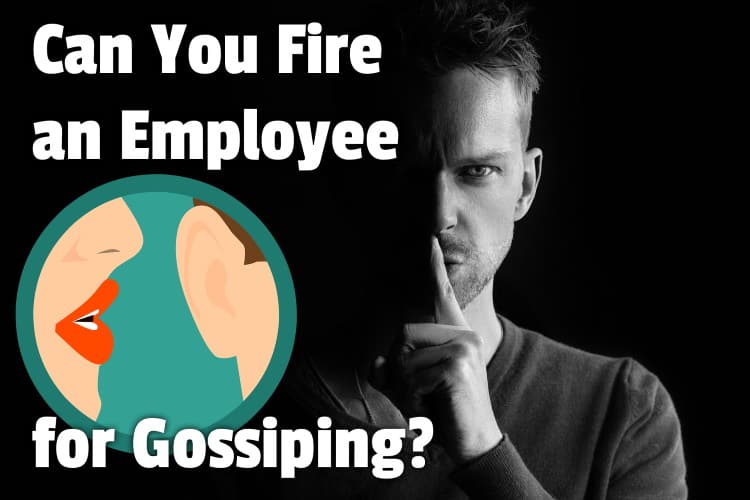 When you work in a place with a lot of other people, gossip is a natural by-product of that. While sometimes harmless, many wonder can you fire an employee for gossiping?

Here’s what you need to know:

In at-will states, employers can fire anyone for any reason. But even in other states, gossip can be considered “creating a hostile work environment” and can lead to disciplinary action eventually leading to termination.

But there’s a lot more to know about gossip in the workplace and what, exactly, is an “at-will” state. So, in this article, we’ve got all the facts on gossip.

We’ll walk you through the reasons you can fire an employee for gossiping, why gossiping is so detrimental to the workplace, and how to solve a gossiping problem among employees.

Let’s talk about it (no gossiping involved)!

What exactly is gossiping?

Gossip can be anything from rumors to truth, to outright lies. Even if it’s true (like maybe your supervisor did have too much to drink at the company party), it’s still mean-spirited and not appropriate in the workplace.

In most cases, these things are spread behind the back of the person(s) the gossip is about.

It’s, unfortunately, an all too common occurrence in the workplace.

While sometimes it’s just intended to be funny (“did you see who so-and-so brought to the company party??”), it’s often mean-spirited. Sometimes it gets downright nasty and is intended to malign someone or even derail their career options.

I still recall a situation at one of the Whole Foods stores I used to work at in downtown Austin.

I had stopped working there in early September 2005.  About 6 weeks later, at a friend’s birthday party, I met the woman who would later become my wife (and still is). While she had worked at the store when I was there, she was one of the 650-ish employees in that store.

So in truth, while I had seen her, I didn’t even know her name when we officially met.

But a few people, really 1 in particular, decided that my girlfriend (now wife) was somehow doing well at work because of her association with me. She gossipped from one side of the store to the other, despite the fact that I didn’t even work there anymore and had no direct conversation with any of the leadership in that store (about her or anything else).

It was mean, distracting, and ultimately put my wife in the position of having to work extra hard to prove herself instead of just working.

Gossip is damaging to morale, takes its toll on productivity, and can be incredibly demoralizing to otherwise great employees.

Can I get fired for spreading rumors?

Gossip may seem like a small thing, but when it comes to the workplace, gossip can actually end careers.

Let’s take a look at if employers can fire employees for gossiping, why gossiping can be so detrimental to the workplace and reasons why employers may consider firing an employee for gossiping.

Because gossip has had so many detrimental effects both on people and the workplace as a whole, many employers have wondered if you can actually fire an employee for gossiping.

As it turns out, you can get fired for gossiping.

When we break it down, a lot of states and employers are what we call “at-will.” This means that employers can fire employees at will for any reason or for no reason, and with or even without notice.

Even if employers aren’t in an “at-will” state and even if they aren’t an “at-will” employer, they still may be within their rights to terminate an employee for gossiping. This is because of the detrimental and negative effects gossiping can have on the workplace and on employees in general.

Gossip is just one of several types of behaviors or actions that are the sign of a negative or bad attitude.

Reasons It’s Acceptable to Fire an Employee for Gossiping

However, there are more reasons why it may be acceptable to terminate an employee for gossiping.

It can be a verbal conflict, just a disruption, or even turn violent.

When these things arise, employers need to shut it down quickly. While that doesn’t usually mean firing someone without warning. It can lead to immediate dismissal if the gossip is severe, And it can lead to disciplinary action that eventually leads to being fired.

Gossiping in the workplace has a negative effect on morale and productivity.

And those are two things that are absolutely necessary for a business to run well. When gossip makes employee morale and productivity go down, an employer can decide to fire the employee causing it.

Are you experiencing hostility at work? It is illegal for employers to allow a hostile work environment. Hostile behavior includes various forms of harassment. If you feel you have a case and would like to talk to an expert, contact us at https://t.co/ykgi2kvGl2. #ScottPerez pic.twitter.com/oIeoq7EgmL

Why Gossiping is So Bad in the Workplace

Gossip has many detrimental effects on the workplace, even if it seems like something small that can’t affect anyone.

Let’s look at some of the main reasons:

When gossiping happens, especially when it’s about things that aren’t confirmed (which it most often is), it breaks down the trust level among employees and employers.

2. Gossip Can Be the Death of Teamwork

Trust among employees goes hand in hand with teamwork – and when employees don’t trust their coworkers, it’s harder for teamwork to happen.

Teamwork is a huge component that plays into the success of every business. Employees are more often than not part of a team, or the business itself is a team.

When employees and employers can’t work together, teamwork dissolves – and other bad consequences can follow.

When it comes down to it, gossip overall causes conflict. Sure, conflict in business and among employees can happen for a number of reasons.

The difference is, the conflict caused by gossip can snowball and affect every employee involved. Employees who have gossiped or been the victim of gossip can engage in conflict, and that conflict can turn into a hostile work environment – especially if the problem isn’t resolved.

4. Gossip Results in More Spending on Supervisors’ and Employers’ Time

Supervisors and employers have enough to do and handle as it is, but when gossip is involved, more of their time can be spent trying to resolve it.

The time supervisors and employers have to spend resolving issues with gossip could be better spent in other areas, like productivity and company morale.

Gossip and the problems it causes can also affect supervisors themselves. If supervisors have someone in a position higher than them, the supervisors may have to take the fall for any performance or morale issues their teams are experiencing due to gossip.

As you can see, gossip really affects every part of a business and everyone involved.

A bad attitude in an employee, while sometimes fixable, is usually something ingrained in them and unrelated to the job. In many cases, it’s virtually impossible for an employer to “fix” a bad attitude.

I go into a great amount of detail in a recent article about how to fire an employee with a bad attitude. There’s a right way to do that and a wrong way. The wrong way can lead to unemployment hearings and even poor morale among the remaining employees.

So definitely check that out as it’s something every employer will face eventually. Just click the link to read it on my site.

How to Get Rid of Workplace Gossip

However, it doesn’t always need to come to that.

There are some tips employers and employees can take to lessen and even get rid of workplace gossip so otherwise good employees don’t have to lose their jobs.

Employers can protect their businesses from the effects of gossip (including firing an employee) if they enact a zero-tolerance policy.

Zero tolerance policies show employees there are severe consequences if they participate in the activity with zero tolerance – and can prevent them from gossiping in the first place.

Gossip doesn’t always have to be negative. Employers and supervisors can encourage positive gossip among employees, which can lessen the effects of normal or negative gossip.

Positive gossip entails employees, employers and supervisors thinking of the great things they have done, like going out of their way to help a customer, getting a great sale, or anything that really positively affects the company.

Then, employees, employers, and supervisors can share those great things among others to start a chain of positive “gossip” with none of the bad consequences of normal or negative gossip.

You may have heard the advice that when it comes to bullies if you ignore them and don’t give them a reaction, they’ll stop bullying.

The same can actually be true with gossipers. Gossipers often thrive on the attention and recognition they get from starting and participating in gossip.

Sometimes they spread negative things about others to make them feel better about themselves. Or they think it somehow makes others think more highly about them. (hint: it doesn’t)

If no reaction is given to the one who starts or engages in gossip, they’re very likely to stop.

Nothing is in it for them anymore! Ignoring the gossiper(s) is a great way to lessen and prevent gossip in the workplace as a whole.

Of course, employers shouldn’t ignore gossipers. As leaders, it’s our job to keep the peace and protect our employees. As employers get wind of gossip or otherwise negative behavior, we have an obligation to step in quickly, consistently, and firmly.

Did I cover all you wanted to know about whether you can fire an employee for gossiping?

In this article, we took a look at the workplace environment and something everyone has unfortunately dealt with; gossip.

We looked at why it’s so bad for the environment in your store or company. But we also explored some solutions you can implement to possibly avoid having to fire anyone.

After all, it’s much easier to keep an otherwise good employee than it is to fire them and hire and train a new one.

Specifically, though, we answered the question can you fire an employee for gossiping with the answer yes.