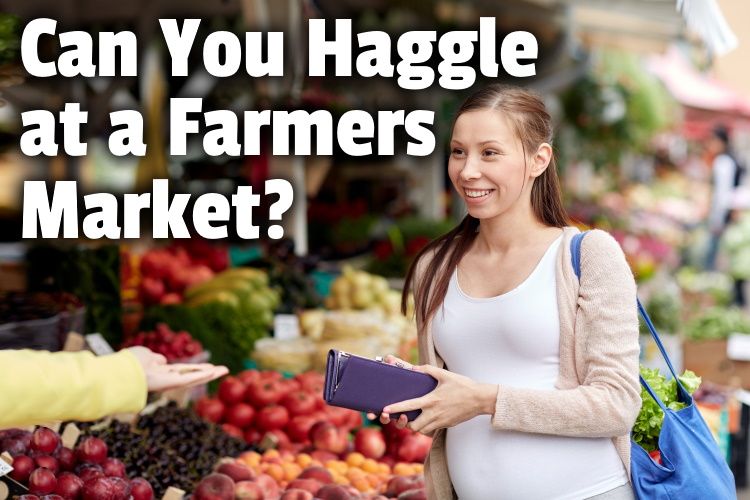 Farmers Markets often have the freshest food you can get, literally fresh from the farm. And it’s great to support local growers too. But since the atmosphere is very different from a traditional grocery store, I’ve wondered can you haggle at a farmers market?

Here’s what I know from looking into it:

You can haggle at a farmers market, as haggling is not against any rules, but not every farmer will be willing to lower prices. However, the best time to negotiate is towards the end of the day, as most farmers would rather sell it than pack it back up.

But of course, there will be some exceptions.

And, as I implied, supply and demand also factor in heavily. Most farmers simply don’t want to haul a bunch of stuff home at the end of the market hours. After all, every time a piece of produce gets touched, it increases the possibility of becoming bruised and unsellable.

So in this article, we’ll explore the right way and the wrong way to haggle, so you can get the best prices. Let’s dive right in!

“I adore to get to the local farmer’s market early in the day to get the best produce for my meals. Anusol Soothing Suppositories ensure I can haggle with the best of them, without any discomfort.” pic.twitter.com/qBSfYbgL5w

Is there a specific farmers market etiquette?

There isn’t a specific farmers market etiquette, but there are some common expectations such as only handling items you intend to purchase, asking for samples rather than taking one and reading signs before asking questions that may get asked hundreds of times.

The first tip I’ll offer is that you’ll have to relax when you are there. The culture is different. It’s unlike dashing in and out of a grocery store. Relax and interact with the farmers.

You might be wondering what the primary purpose of these markets is?

After all, there are world-class grocery stores all over the city. That’s precisely what I explored in a recent article of mine. It’s the ultimate guide.

Also check to see if you are near a community garden or famer’s market. Those would be great ways to lower your produce budget. (community gardens are typically free and farmer’s markets allow you to haggle and bundle deals) pic.twitter.com/JnPqoWxEJZ

Do vendors frown on negotiation at the farmers market?

Most vendors don’t frown upon negotiation at a farmers market, but because the vendors are often the grower or owner themselves, they will take lowball offers more personally. So when haggling, always be respectful and only make reasonable offers.

Why? A lot of farmers are highly hardworking folks who put in a lot to plant, nurture, harvest, and transport high-quality produce from their farms to the city.

They are not really making a lot of money at the end of the day.

Like all of us, they have bills to pay and would have calculated what they deem is a reasonable margin for their effort. If you’re buying in bulk, it makes sense to negotiate for a lower price, but if you’re just buying a few items, asking for a reduction on these might seem unreasonable.

But there’s really no harm in politely testing the waters.

Some farmers or markets might be more open to the idea than others. The key issue is being sensitive enough to discern if the vendor won’t feel insulted by your offer.

Our #Hyde #communityallotment volunteers are out in force today – haggle and barter their produce including veg, flowers and eggs #Tameside pic.twitter.com/349BlKvLJW

How much do vendors usually go down on prices at a farmers market?

When haggling at a farmers market, expect vendors to discount between 5%-10% off. Discounts above that are rare as most vendor’s profit margins are low to begin with. However, vendors with large amounts of remaining product at the end of the day may discount further.

Farming is highly challenging, so it’s not as if farmers are making money hand over fist. But, if you follow common-sense practices, you could get them to give you discounts.

The key is to buy when the produce is in season.

At that time, there will be a lot in the market, so there’s a healthy competition. And, do walk around, don’t buy at the first stall. You might get products cheaper if you walk around and compare prices.

In other words, if you’re buying watermelon in December, many vendors won’t have it since it’s out of season. The ones that do will be less likely to negotiate because they know you don’t have many options.

However, if you’re buying tomatoes in early summer, and every other vendor has great-looking tomatoes, expect that competition to drive prices down.

Another thing is that you could buy in bulk and share with some friends.

Most farmers would be inclined to give you discounts when they know you’re saving them time. They won’t have to spend as much time waiting for buyers if many people are buying a lot at a time.

You could also opt for some “ugly” produce.

Bruised produce may not be attractive, but it’s the same quality and taste. If you know how to negotiate in a considerate manner, you could get about 10% off the price.

What should you not buy at a farmers market if you want to save money?

Avoid buying clothing, maple syrup, meat, or seafood at most farmers markets as they are less apt to be competitive on price. Also, some organically-grown produce, such as corn, pineapple, cabbage, and onions, isn’t always worth the extra cost as pesticide use tends to be very low.

Firstly, the key is to be a bit “scientific about it.

How? By comparing the quality and prices of what you could get at your local grocery store with what’s available at the farmers market. It’s also better to focus on items that you buy a lot and those that are expensive. After all, you don’t want to spend hours that you could spend having a good time just to save a few dimes.

Secondly, don’t buy the first things you see when you get to the market. Walk around. It’s quite possible you’ll get them at a cheaper rate, at other stalls.

Thirdly, you don’t really need to always buy organic produce as I mentioned above. Really? Yes. Here are the produce items that typically contain the least amount of trace pesticides.

If money is no object, sure, buy all organic. But if you’re on a budget, skip the following organically-grown items:

Some of these fruits and vegetables might contain negligible traces of pesticides.

But, the quantities are not harmful at all. Most of the fruits have thick, protecting covering, so only an insignificant portion (if any at all) of pesticides seep in. And, there are even cases, such as Onions and Asparagus, where pesticides are not used at all.

Both have substances that naturally ward off pests.

Frozen vegetables are blanched before being refrigerated. This process helps reduce the number of pesticides to a negligible and healthy level.

If you’re buying veggies that are not frozen, you could remove the outer layer before washing and preparing them.

Curious about the difference between the cost of organic relative to inorganic products?

I explored it in a recent article of mine. I looked at the actual costs of dozens of items to see where the cost difference was huge, and in some cases, where organic was actually cheaper.

The right way to haggle at the farmer’s market, according to a farmer: https://t.co/YOF903ZaOe pic.twitter.com/IQjfU1HRQs

Do farmers lower their prices at farmers markets shortly before closing time?

Yes, most farmers market vendors lower their prices shortly before closing time, especially fruits, vegetables, and anything perishable. Most farmers would prefer to sell it for something above their cost, rather than pack it up and bring it home.

The farmer’s aim is to sell as much as possible before they close. In fact, to sell everything if it’s possible.

They won’t like the idea of hauling the produce back to the farm. So, as the day draws close to the end, they’ll most likely be more open to the idea of selling at a lower price.

If you’re interested in saving money, you could check the market out later in the day. And, it stands to reason that most farmers would be more open to the idea of a discount if you’re buying in bulk.

As I hinted at earlier, it’s not that these farmers are exactly making out like bandits. You might decide to support your local farmers market and buy at the rates offered in the morning.

In the paragraphs above, I shared a ton of helpful tips, such as what’s expected when you’re at the market, and if it’s okay to haggle.

But we also explored the kind of discount to expect, and even what not to buy if you’d like to save money. I also shared links to two in-depth- guides that’ll provide you with more details.