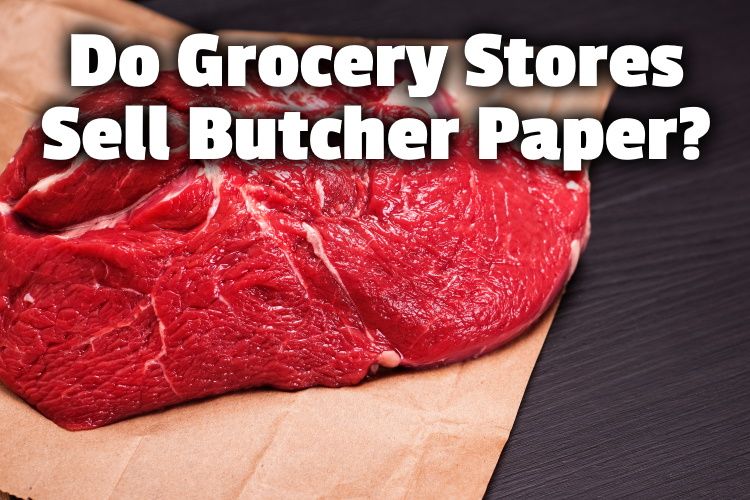 All of us have tin foil in our kitchen. But sometimes you Google a recipe that calls for butcher paper. We don’t always have that on hand, so do grocery stores sell butcher paper?

Here’s what I know from selling lots of it:

Yes. Grocery stores do sell butcher paper. It is usually found with the plastic wrap, tin foil, and parchment paper but you may also find it with charcoal due to its popularity with people who smoke briskets. However, since it is the same thing as kraft paper, Michaels and Hobby Lobby will have it also.

But that’s just a quick snapshot.

So in this article, we’ll take a deeper look into butcher paper and answer a few questions such as:

All grocery stores will carry butcher paper in the same section as tin foil and plastic wrap. But arts and craft stores such as Michael’s or Hobby Lobby will also have it under the name kraft paper.

Butcher paper is great for your brisket.

Office supply stores are also a great place to check out too.

And there are also some dedicated paper merchants who sell, such as www.papermart.com. You can walk-in or order online from any of the stores.

To simplify things for yourself, you could simply order from Amazon. The best one is this one on Amazon. I used it myself the last time I smoked a brisket on my Traeger.

Just click that link to see it on Amazon.

Later, in the article, I’ll share some info about the type of butcher paper that Aaron Franklin uses and the link you could use to buy from Amazon.

Do they sell butcher paper at Walmart, Home Depot, or Target?

Yes, you can buy butcher paper at Target, Walmart, and Home Depot. At Walmart and Target, it will be with the tin foil and plastic wrap. At Home Depot, you will find butcher paper with the BBQ supplies by the grills.

Now if you’ve never used it before, Home Depot might seem like an odd place to find butcher paper.

But that’s because while it has a wide variety of uses, it’s most prized by people who smoke brisket. Essentially, at least 4 hours into the smoking process, you take the brisket and wrap it in butcher paper. Then you put it back on the smoker and let it continue for another 4-8 hours depending on the size of the brisket.

If you grill a lot, you’ll love a recent article of mine on how to use a Traeger Wood Pellet Grill.

It’s loaded with tons of info. I just smoked my 1st brisket on mine about a month ago and it came out much better than any brisket I’ve every smoked on any of my other grills. I’m in Texas so of course, I have 3.

But Traegers aren’t without issues and problems. And another recent article of mine is a companion piece to that titled ‘Why did my Traeger Catch Fire.

In the article, I covered topics such as, can a pellet grill catch fire, are food processors worth it, what to do if your Traeger catches fire, does a Trager have a flame or ever flare up, and how to put out a Traeger fire.

The sacred #lunchboxenvy is within reach with Greenridge Farm deli meat! Score bonus points by wrapping the sandwich with brown butcher or parchment paper and finishing it off with a burlap bow! #greenridgefarm #greenridgefarmfoodies pic.twitter.com/SO7SA46mpp

Can you use parchment paper in place of butcher paper?

The aim is to retain the moisture — to prevent the meat and its bark from drying up.

This “small’’ task makes a world of difference to the taste. So, butcher paper is mainly used for wrapping, while parchment paper is primarily used in baking, to make sure that what’s been baked does not stick to the pans and the oven.

Depending on your needs, you might want to get both — parchment and butcher paper.

That’s why, based on my experience and research, I wrote a detailed guide on the different sections of a grocery store in a recent article of mine.

And I figured out why milk is always kept in the back of the store. It’s a highly detailed guide that’ll unravel the mystery of how grocery stores are laid out.

Just mopped the Brisket and wrapped in the butcher paper, back on the smoker at 156 degrees after 11 and 1/2 hours. When it hits 200 degrees will pull and wrap in a towel and in the empty cooler to hold til ready to consume. pic.twitter.com/gkaqnF17wG

Is butcher paper and parchment paper the same thing?

No. Butcher paper and parchment paper are not the same things. Butcher paper originated from kraft pulp and is sometimes called kraft paper. Butchers use it for wrapping meat and fish. Parchment paper is waxed and designed to prevent baked goods such as cookies from sticking.

So in a way, despite both being made from paper, they are totally different with different purposes.

Parchment paper is a paper pulp that’s been passed through sulfuric acid to treat or coat it so that it’s heat-resistant and non-greasy. In this treated state, it looks like parchment.

The coating is not affected while you’re using the paper. Its main benefit is that it prevents food from sticking. It’s available bleached (white) or unbleached (brown).

Professional bakers and chefs love using parchment paper because it can be used for a lot of things. It can be used to wrap fish, to line cake molds and baking sheets, and to cook dishes en papillote.

While sifting or grating a small ingredient, you could use the parchment paper covered counter or tabletop and pour what’s been grated or sifted into a dish later. It can also be spread on countertops while you work so that cleaning up can be easy later.

What kind of butcher paper does Franklin use?

CLICK HERE to see the butcher paper on Amazon that Aaron Franklin prefers.

You might be wondering why that particular paper? Well, it’s incredible. Let me share some of its properties. You can use it to store and wrap food without any anxiety that it’ll leak, and you can use it to smoke meat for hours.

It’s 100% natural virgin pulp (so you need have no worries about chemicals).

It’s unwaxed, uncoated, and unbleached. It’ll keep the flavor and purity of the roast untainted and safe. It’s made in the U.S.A, so you can be sure it’s safe to be used with your food.

In addition to using it while you barbecue, you can also use it to line birds’ cages and for your art and crafts.

Want to smoke a brisket just like Aaron Franklin?

Yes, there are articles and YouTube videos galore, but why not learn how to do it FROM him?

Aaron Franklin himself has a masterclass on how to do Texas-style BBQ including his world-famous brisket that often sees lines around his building that are 3 hours long.

Did I cover all you wanted to know about whether grocery stores sell butcher paper?

It’s usually found where you’ll find the aluminum foil and plastic wrap. However, you may see it in the section with charcoal too as it’s a popular choice for wrapping briskets halfway through the smoking process.

But we also learned that butcher paper is also known as kraft paper. So arts and craft stores such as Michael’s or Hobby Lobby will have it too.

Continue Reading
link to Who Has Better Meat: Sam's or Costco?

Most grocery stores sell meat, but meat quality varies from store to store. Sam’s and Costco are two big competitors but who has better meat: Sam’s or Costco? Here's what I learned in trying...