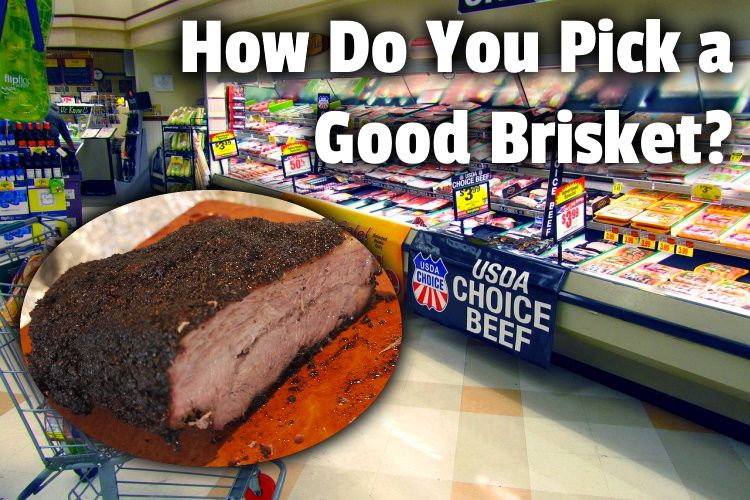 Brisket is arguably the holy grail of barbecue. But when you go to the store, there can be a lot of brisket choices and sizes. So, how do you pick a good brisket?

Here’s what I know based on my experience:

Start by picking Prime or Choice brisket. Then look out for dark purple-ish meat that has a “fat cap” at least 1/2 inch thick, and is streaked with flecks of glossy white fat. Also, look for one that isn’t significantly thinner on one side than the other, as this can cause uneven cooking.

Of course, Wagyu is often an option, but it is more expensive.

The marbling is vital as it’s central to whether the brisket would be juicy, tender, and flavorful. But this is just a small part of what we’ll learn.

In the article, we’ll explore which cut of the brisket is the best, what a good brisket looks like, and which one is better: Prime or Choice.

We’ll also check out which one is ideal: The point or the flat. And, we’ll conclude by considering a “taboo”: whether cutting the brisket in half before smoking is OK. After all, some whole briskets are huge and might not fit as one piece in your smoker.

Point and flat separated (point cut in half) for maximum bark. Rubbed and ready for smoke. #bbq #brisket #Weber pic.twitter.com/CXAYGeEIJd

Which cut of brisket is best?

The point is the best cut in a brisket because it has more fat and is more marbled. Naturally, it is the more tender and flavorful cut. It is smaller, thicker, and more marbled than the flat, which has more connective tissues which can make it tougher.

First off, let’s back up a bit and understand what’s brisket.

Beef brisket is the chest muscle that’s found near the front legs of the steer. It’s a tough cut — it’s not tender because it’s actually muscles that are close to the legs and do receive a lot of workouts.

It’s huge and is made up of two cuts — the flat and the point, also known as the first and second cut, respectively.

They are almost always sold separately. But you can also buy the whole brisket —- in other words, the point and the flat combined.

It’s known as a “full packer” or “packer” brisket. Unless you’re cooking for a large number of people, you would naturally prefer just one of the cuts.

Choosing a great brisket shouldn’t be a chore, so we made an easy checklist!
• Go for the prime cut!
• Meat should be dark red, almost purple in color.
• Fat should be a clear white.
• Flat should be an inch or thicker.
• Marbling should be prominent. pic.twitter.com/LCqa7SAniy

A good brisket has a dark purple-ish color, it’s floppy, and it has a fat cap; a layer of fat on one side that is at least 1/4 inch thick. The other side will also be flecked with fat. The more the fat, the more flavorful, the more tender, and the juicier it will be.

But the grade of the beef is the first factor to check out — Choice is good, but Prime is better. Select, not so much.

If you’re buying a “full packer” — that’s the whole brisket, look for one that has a uniform and thick flat, with the flat being at least 1-inch thick at the end.

You also want to look for a brisket that has a fat cap, which should be no thicker than 1 inch.

I say no more than 1 inch because you’ll be trimming off the excess down to somewhere between 1/4 inch and 1/2 inch. So a really thick fat cap means, since you’re paying by the pound, you’ll be wasting money.

The cap keeps the meat moist and traps evaporating moisture. The fat should be white and glossy.

You want to look out for brisket that’s highly-marbled, a reflection of the intramuscular fat. If you look closely at the meat, you can see whether it’s well-marbled or not. It’s simply the white flecks of intramuscular fat on the cut.

Now, if you’re going to wrap your brisket a few hours in, as people like BBQ-god Aaron Franklin do, you’ll want parchment paper, not foil.

In a recent article, I said they often do. But I also explored whether butcher paper is sold at Walmart, Target, and Home Depot and whether you can use wax paper instead.

Oh wow. Prime Barbecue if you’re ever in Knightdale is incredible. I’m not usually a brisket guy, but I am now. pic.twitter.com/1Jmtyxg5no

Is Prime or Choice brisket better?

Prime brisket is better than Choice brisket because Prime beef is the highest grade of beef. It is beef that has the highest marbling, which makes it more tender, flavorful, and juicier. But Prime is very rare. In fact, on average, about 2% of beef receives the grade “Prime.”

Prime and Choice are grades applied to meat by the USDA.

They are labels that indicate the quality of the meat in terms of tenderness, juiciness, and flavor. Prime is the highest of the grades. It’s indicative of meat from young cattle that have been fed well.

This is shown in the amount of marbling it has. This is usually more pronounced when one checks the “point” end of the brisket.

Choice is good. In fact, because of the scarcity of Prime, Choice is what is often used at BBQ restaurants. It has less marbling than Prime, as such is not quite as tender. But it will still make a fine choice.

Lots of people shop at places like Sam’s Club or Costco. And both offer a large array of meat. But who has better meat, Sam’s or Costco’s?

Both offer USDA Prime meat in addition to Choice. In a recent article, I get into that question. But the irony is that one of those stores is cheaper than the other while one has a tendency to have fresher meat. But there is one clear winner.

Is brisket point or flat better?

The point of a brisket has more fat and is more flavorful, making it more sought after, especially for “fattier” brisket. But it does not have as much meat as the flat. The flat is usually larger than the point and has more meat, and is overall leaner.

Some folks prefer the point because it is more tender and juicier.

Both are delicious when cooked well. So, it depends on what you want. The flat has less fat. If you’re being careful about your fat intake, the flat might be the way to go. It has a more rectangular shape, so it’s a lot easier to slice it into uniform pieces.

The point is the more tender and flavorful part because it has more fat. The downside is that you won’t have as much meat. It’s great if you prefer barbecued meat sandwiches.

Is Prime Steak Worth It?

In a recent article, I explained why that’s not always true. I conducted a blind taste test of USDA Prime, Select, Angus, and grass-fed ribeye steaks. I cooked them all exactly the same at the same time, and then we judged for ourselves.

Just click the link to read it on my site and see which one tasted best!

Is it OK to cut brisket in half before smoking?

It is OK to cut brisket in half before smoking. Brisket is usually smoked whole. But when smoking a whole brisket, if it will not fit into the smoker, simply divide the flat and the point before smoking.

Of course, if it will fit, by all means, leave it whole.

But it makes sense to cut brisket in half if you have a whole one that is too big for your smoker. Brisket is made up of these two different muscles — the fat and the point. You’ll need a sharp knife to carefully divide the full packer into the two sub-primal cuts. 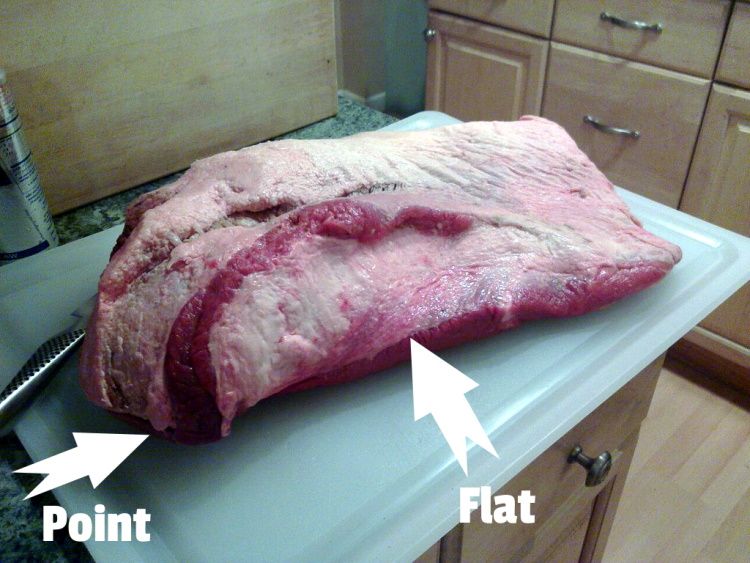 Refer to this image, but the point has a tip and then folds underneath the flat. It’s easier to see if you lay a whole brisket on the table with the fattiest side down.

Then look for a fat seam separating the two.

Start cutting into the fat seam, knowing that it curves back. Just keep cutting into that fat seam until you are left with just a thin flap of meat. Cut through that, and you now have both the point and the flat to cook separately.

Want to know which grocery store has the best steak?

Check out a recent article where I revealed that prime beef is available in small quantities at grocers such as Wegmans and Whole Foods. You’ll get the best steak at the latter.

I also included a guide on the parts of the cow different steaks are cut from. And what makes one steak better than another.

In this article, we looked at which cut of the brisket is the best and which one is better: Prime or Choice.

We also checked out which one is ideal: Point or Flat, and what a good brisket looks like.  And, we wrapped things up by considering if it is cool to cut brisket in half before smoking.

Whole brisket by Brett Spangler and Brisket by Rebecca Siegel are licensed under CC2.0 and were cropped, edited, and had a text overlay added.

link to Who Has Better Meat: Sam's or Costco?

Most grocery stores sell meat, but meat quality varies from store to store. Sam’s and Costco are two big competitors but who has better meat: Sam’s or Costco? Here's what I learned in trying...

Continue Reading
link to Is Prime Steak Worth It? - Steak Taste Test Challenge!

Lots of people love steak. You’ve noticed the different grades of meat at the grocery store. But Prime beef can be pricey leading many to wonder is Prime steak worth it? We did a grill off with...