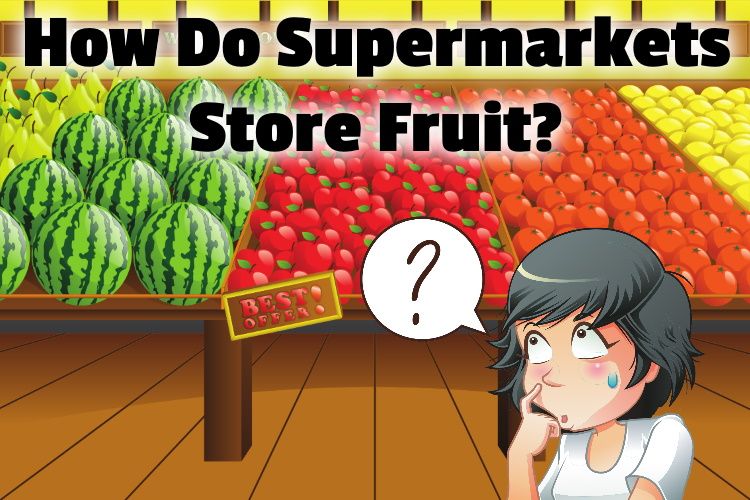 How grocery stores keep fruits fresh is a mystery to a lot of people.  After all, stores order large quantities of things that might go bad quickly for us at home. So how do supermarkets store fruit?

Here’s what I know from 2 decades in that world:

Supermarkets store most fruits in large refrigerated coolers in the back room. The fruit is pulled from the sales floor each night, and placed in the cooler to extend shelf life. Then it’s restocked, & rotated the next morning. Some fruits & vegetables do not require refrigeration and are left on display overnight.

However, there could be a few more burning questions on your mind, like:

Having worked as a general manager at Whole Foods Market for twenty years, you could say that I know a thing or two about this domain. And so I’ll answer all your questions.

You’ll find some really surprising stuff in this short article.

Let’s get started by considering perhaps the most vital question:

Yummy!! I am in heaven Hubby Scott
got me a big fruit bowl at Wegman’s and wow delicious!!! pic.twitter.com/5kF22xZtTX

How old are fruits in grocery stores?

A lot of them are quite old.

Truth be told, most fruits are not as fresh as you think. By fresh, we mean: just been harvested. The reality is that they are often harvested in large quantities and then preserved over time, and are gradually offered in the stores and supermarkets.

In some cases, they’re chemically treated to keep them looking fresh.

Apples typically get waxed to enhance the appearance and slow deterioration. Some of the fruits are preserved for up to 6 or 12 months. The time needed for the preservation process varies from fruit to fruit. It could be days, weeks, or months, as well.

Sometimes apples even get coated in a soy-protein mixed with pullulan (a polysaccharide polymer) (source). That sounds a little yucky to me. But luckily you shouldn’t find that with organically-grown apples.

Ultimately things like that reduce spoilage and increase profits.

Fresh fruits, as you know, start to decay or rot after some time if they’re not preserved. It’s simply the most practical thing to do, to ensure year-round availability. In fact, even before modern refrigeration technology, folks had evolved different strategies for preserving food.

After all, as you know, most fruits are seasonal.

And yet, we’ve become accustomed to buying most fruits and vegetables all year, even out of season. As the demand for things like watermelon in winter has increased, supermarkets have found ways to provide their customers with what they want.

This is the reason for ensuring that they are bought and stored in large quantities. They are refrigerated to slow down the process of ripening. You know what’ll happen if all the fruits were to ripen naturally. It’ll lead to massive decay and waste!

The above triggers two questions that I’ll address.

Yes, they’re indeed safe to consume, and experts say that the loss in nutritional value is not significant. So, you need not worry.

I know what you might be thinking, but what happens to fruits and other items that remain unsold after some time?

This is what I explored in-depth in a recent article of mine. How stores deal with unsold items is something many smart folks find interesting. Just click the link to read it on my site.

How do supermarkets keep bananas fresh?

I must provide some context before answering the question.

One fact that a lot of people are probably unaware of is that bananas, despite how inviting and fresh they look, are actually from far-away lands. (I’m not being dramatic. It’s the truth.)

They do not grow in most areas of the United States.

The obvious implication is that what we produce is not enough to meet the demand. I’ll tell you where most are imported from and how they are kept fresh, once they get here.

Costa Rica, Columbia, Honduras, Ecuador, and Guatemala are the leading exporters of bananas to the US.

In fact, in a particular year, these nations together supplied 94% of the bananas we consumed! (And, for what it’s worth, last year, we consumed the highest number of bananas in the world).

After they’re harvested, and before they’re sent over here, they’re washed and stored in boxes.

The boxes are then sent in ships or trucks equipped with refrigerators. Both processes: washing and refrigeration, help ensure that they don’t become ripe in transit.

However, when they’re near the destination, where they’ll eventually be sold, they are forced to ripen. How? There’s a gas called ethylene that’s used for the process.

During this process, they’re stored in sealed rooms.

After some time, the gas is removed, while the room is heated. The heat ripens them. They’re then delivered to the supermarkets and grocery stores where they’ll be sold. At the risk of repeating the obvious: the bananas are forced to ripen. The ripening process is not natural.

Now you know how bananas are kept looking fresh. Does this process apply to all kinds of fruits? We’ll see in the next paragraph.

Even in December, Ontario is able to offer local fruits and vegetables. Look for our logo in grocery stores! pic.twitter.com/YkhD2U78tm

Is all fruit at the grocery store kept in cold storage?

No, not all the fruits are kept in cold storage.

Some fruits won’t ripen if they’re refrigerated. Refrigeration, as you know, is a highly-developed technology. So over time, we’ve learned what can be kept in cold storage, for how long, and also those fruits that should not be kept there.

But sometimes refrigeration is used to slow down ripening if a store bought too many avocados for Cinco de Mayo, for example. Before the avocados start to get mushy, they might put them in a cooler to slow that process down.

And, there are fruits such as lemons, lime, oranges, plums, clementine…citrus fruits, in general, that are kept on the sales floor displays.

Berries, apples, avocados, and pears do not need to be refrigerated.

But they can be. Some fruits that shouldn’t be refrigerated would still ripen when you refrigerate them, but they may become softer, and the flavor may not be as great as it should be.

It’s interesting also to know why you never see fruit flies at the store, right?

Even though some fruits are not kept in cold storage, they are free of fruit flies. In a recent article of mine, I explained in detail what attracts them and the steps supermarkets and grocery stores take to prevent them. It’s interesting and instructive.

Morning ! 👌😋 Fresh raspberries from the local fruit and veg shop. Can’t beat it. Sooooo much fresher than the supermarkets! #fruit #fresh #shoplocal pic.twitter.com/skmIOwOtlc

But let’s put this in context first. Cut fruit is usually made from fruit culled from the display tables that were bruised or overripe. In other words, turning it into cut fruit (and raising the price per pound) is mainly a way to slow down the amount of fruit that gets thrown away.

So most cut fruit is already a little past it’s prime.

Refrigeration ensures that the natural process of ripening and then rotting is slowed down so that what would have taken days now stretches over weeks or months. As you know, different fruits ripen at different rates.  Some do not need to be refrigerated.

But most cut fruit is kept in upright refrigerated display cases on the sales floor. Since it’s already refrigerated, they don’t do anything other than daily checks for out of date products, or signs of mold.

However, it’s worth noting that some cut fruit, such as apples, are treated with edible coatings and anti-browning agents. These are essentially chemicals the FDA has deemed acceptable to eat (citric acid is often involved), that enhance the appearance of freshness. (source)

Now, you know how fruits are kept fresh.

But where can you get the freshest produce? That’s what I explore next. Before you read on. You’ve probably experienced that small frustration that comes with opening plastic grocery bags, right. In this recent article of mine, I offered highly effective tricks that’ll make it a breeze.

Which grocery store has the freshest produce?

In the paragraphs above, I’ve shared with you how fruits are kept fresh.

If you often shop in different stores, and you have a keen eye, you must have noticed that some stores do have better-looking produce than others.

Interestingly, there are consulting companies that track such details. I’ll let you know which stores are the top contenders, those that consumers rate low, and of course, the numero uno.

Here are a few of the top companies:

Places like Walmart and Target, consumers say, are not the best places to shop for fresh produce. But, of course, fruits and vegetables also aren’t what those stores focus on.

Now, you know the best places to go for the freshest produce. But, to be honest, some stores can be a tad difficult to navigate.

This is why in a recent article of mine, I wrote what’s effectively a detailed guide on how grocery stores are laid out. You’ll find it highly informative, especially the parts about how the layouts are designed to influence your purchases and maximize profits.

So did I cover everything you wanted to know about – how do supermarkets store fruit?

In the preceding paragraphs, we looked out how fruits are kept fresh? How Bananas are kept in stores, whether the preservation methods are harmful, the best stores to shop for produce.

You know that fresh fruits are indispensable for a healthier life. And that they’re alluring and sweet to boot. So the grocery stores ensure that their customers get the freshest of produce, all the time, through efficient storage.