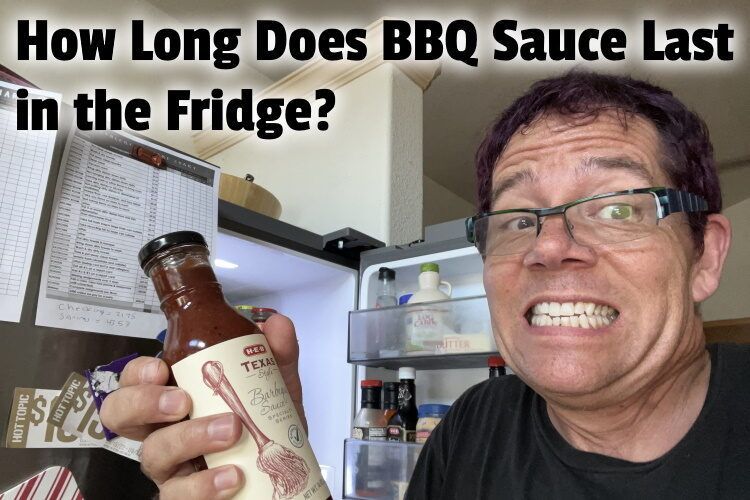 While checking your fridge, you happened upon a bottle of old BBQ sauce. You can’t recall how long it’s been there. So you’re wondering, how long does BBQ sauce last in the fridge?

As a general rule, an opened bottle of BBQ sauce will last six to nine months. But it is best to read the label, as some brands suggest a shorter period.

And if it has been opened and kept in a cool, dark place in the pantry, BBQ sauce should last for about a month at most; so refrigeration is always better.

Most brands of BBQ sauce have minimal, if any, artificial preservatives. So, on average, 4 months after opening them is an ideal period within which to consume them.

But there’s a lot more interesting info to know about the shelf life of barbecue sauce.

In this article, we’ll find out how you can tell if BBQ sauce is bad and how long Sweet Baby Ray’s BBQ lasts. We’ll also find out if you can become sick from eating BBQ sauce that’s past its printed date.

How can you tell if BBQ sauce is bad?

You can tell if your BBQ sauce has gone bad if it has an off-putting smell, its color has changed, it has mold, it’s separated, it’s thick, slimy, or clumpy.

A foul odor is the most telling sign that it’s gone bad. If the store-bought sauce is still good, it should smell a little tart, sweet, and/or smoky. But if that’s no longer the case, and you perceive something pungent, off-putting, or gag-inducing, then it’s time to toss it.

So, the first thing to check is the odor. Simply sniff it; it should smell like BBQ sauce. If it smells like something else, it’s gone bad.

Another thing to check out is the appearance of the BBQ sauce.

This involves checking out the color of the sauce and whether the old BBQ sauce has separated or has grown mold. The deeper and darker the hue, the closer the sauce is to expiring. If it has turned black, it is bad.

Mold is another sign that it’s gone bad. It indicates the growth of spoilage bacteria.

But it’s rare for store-bought BBQ sauce that is kept using proper storage methods to become moldy. If you don’t want to refrigerate it, keep it in a clean kitchen cupboard or a dark place in the pantry.

The third thing to check is whether the sauce is thin and separated. Now, separation occurs naturally and can be ignored if the expiry date or the best-by date is still far away.

But if you noticed that the color had assumed a deeper and darker hue, the expiration date is close, and the sauce is thin and has separated (there’s a layer of liquid on top, while the bottom is super-dense), it’s best to bin it.

In some cases, when it’s gone bad, it may turn solid.

Hot Honey Barbecue Ribs will have everyone buzzing this summer. https://t.co/PoMHIVYTv5 pic.twitter.com/GD95GUs0r6

Sweet Baby Ray’s barbecue sauce can last for four months after it’s been opened. It’s a good idea to ensure that it is always refrigerated after it has been opened for the best quality. Unopened, it’s good for 12 to 18 months.

But when you go to the average supermarket, there are a lot of brisket options, sizes, and prices. So, how do you pick a good brisket?

In this recent article, I shared info on which cut of brisket is best and what a good brisket looks like. I even revealed whether Prime or Choice brisket is better (hint: it’s not what you think).

@krockjosh I just used some BBQ sauce I had in the fridge and thought of you! I think it might have expired. pic.twitter.com/vud1gF3zqA

Can you get sick from expired BBQ sauce?

It is possible to get sick from eating expired BBQ sauce. It may trigger nausea, vomiting, and stomach upset. Ideally, you want to check for the signs of spoilage first before consuming.

If you have an unopened bottle of barbecue sauce that’s a year past its expiry date, don’t simply throw it out.

Of course, it’s best to always check the color, texture, and appearance first. If no sign suggests the quality has degraded, you can still consume it without getting sick.

So whether you can get sick or not depend on the state of the expired BBQ sauce.

Barbecue sauce has a low ph value and acid-forming qualities. So, if you’re suffering from GERD and acid reflux, you want to be careful of taking too much, even if it hasn’t expired.

So, you’ve got the sauce, but where do you get better meat, Sam’s or Costco?

We’re cleaning out the fridge in my parents’ vacation home and found a bottle of BBQ sauce that expired in 2001… pic.twitter.com/6lmekUDh7f

How long does BBQ sauce last in the fridge unopened?

BBQ sauce can last 1 to 2 years in the refrigerator if it is unopened. An unopened bottle of BBQ sauce naturally lasts longer because the oxidation process that will degrade the taste and flavor cannot commence, and the temperature in the refrigerator helps ensure it’s at peak quality.

Oxidation, as the name suggests, refers to when oxygen makes contact with the sauce. We all know that the more exposed a food item or condiment is, the faster its quality will degrade, right?

So, what happens then? After the BBQ sauce has been opened, it will keep for about 1 month when stored in the pantry, depending on the brand. It may even last longer.

So as long as the bottle is not damaged and there are no signs of spoilage which we looked at earlier, it’s still safe to be consumed.

Most commercial sauces use sodium benzoate, an artificial preservative which prevents bacteria growth. Naturally, they’ll last long even if kept at room temperature. But it’s best to keep your BBQ sauce in the fridge after it’s been opened.

Say you’re into BBQ big time, how do you use a Traeger Wood Pellet Grill?

Everyone’s been asking how living with my bf is going so I’d like everyone to know he has four bottles of bbq sauce in the fridge at a time. All sweet n spicy. All open. Not my worst roommate tho pic.twitter.com/kbjudp5kJj

How do you make BBQ sauce last longer?

To make your BBQ sauce last a long time, it should be refrigerated after it’s been opened. The temperature helps in ensuring that its quality is maintained for a prolonged period. If it’s a homemade sauce, it should always be kept in the fridge.

Once you open it, make sure that it is sealed properly after use, and if you decide not to refrigerate it, ensure that it’s at least kept away from direct sunlight. It’s okay to store it at room temperature. It should be kept in a cool place or a dry place.

You also want to clean the bottle’s cap and top now and then. This is because, after multiple uses, some of the sauce can be found on the cap and near the top, and this can be gross after a while.

Simply use a moist paper towel to remove the crust and pat it dry to ensure no moisture could lead to spoilage.

You may also want to store the bottle upside down.

Yes, you read that right. It’s to prevent air from entering the bottle. As you know by now, this will slow down the oxidation process. This works if your bottle can stand on its cap.

If you don’t plan to eat the sauce within 3 to 4 days, you may freeze it in a freezer bag or any other freezer-safe container for up to 3 months. You can use other freezer containers that work for you.

Ensure it’s vacuum-sealed if you want it to even last for a couple of months. Vacuum-sealed barbecue can last 6-12 months.

You can also use your trusty ice cube tray to freeze your homemade BBQ sauce. Make sure you use clean utensils and clean spoons. After all, you don’t want to unwittingly introduce foreign objects that could contaminate the sauce.

Vinegar and sugar are great natural preservatives. You can boil both in a clean, sterilized, airtight container for about 20 minutes. Then add your sauce, seal, and boil again for 10 minutes. Then store in bottles/jars in a cool, dry place away from direct sunlight or refrigerate.

A mason jar would be great for this.

Make sure that you never transfer the leftover barbecue sauce back into the bottle. Pour what you’ll use into a bowl and can add some more if it’s not enough. But don’t try to save money by putting back the remnant.

The remnant will naturally contain other food items that could accelerate the process of spoilage, which would not have occurred if the sauce was the only thing in the bottle.

Ever wondered what are the ingredients for homemade barbecue sauce?

Of course, there are a million variations, but here are the essentials:

In the article, we looked at the shelf life of BBQ sauce, be they commercial sauces you bought in grocery stores or homemade barbecue sauces.

We found out if eating expired barbecue sauce can make one sick, we looked at the signs of spoilage, and we wrapped things up by considering how to make barbecue sauce last longer.

link to Does Soy Sauce Go Bad? How Long Does it Last?

Soy sauce is one of those things most of us only buy every few years and rarely use. After all, it takes a long time to finish a bottle as we only use a little bit each time. So, how long does soy...

Continue Reading
link to How Long Does Mustard Last Before It Goes Bad?

Mustard is a popular condiment that’s used all over the world. But does it spoil? Should you refrigerate it after opening? How long does mustard last before it goes bad? If left unopened in the...