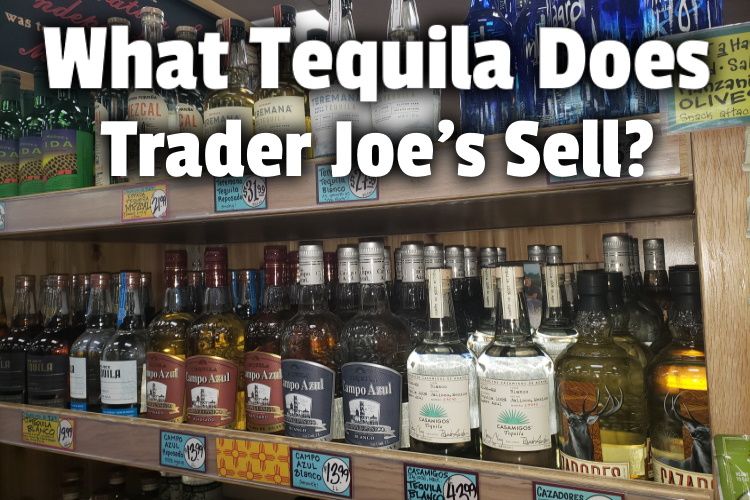 Liquor isn’t allowed to be sold in grocery stores in every state. But where it does, if they have a Trader Joe’s, that’s a great place to buy liquor, especially tequila. But what tequila does Trader Joe’s sell?

I decided to investigate and found that:

Trader Joe’s sells several varieties of tequila bottled under the Trader Joe’s label, but they also stock many top name brands as well from Milagro, Cazadores, Hornitos, and Casamigos in certain states.

It’s not an accident that Trader Joe is one of America’s beloved grocery stores. Like the rest of the store, they have great products at rock bottom prices with their liquor and tequila.

And their house brand tequilas ate affordable and high-quality. Some even have won top awards.

Let’s dive into the details.

Since when does trader Joe’s have tequila???? pic.twitter.com/8sLsbJnraz

Does Trader Joe’s only sell their brand of tequila?

However, not every name brand is sold in every state that allows liquor sales.

In fact, its liquor selection is one reason many customers swear by the quirky yet highly successful store. It offers name-brand bottles at prices that won’t break the bank.

But in order to offer its customers good products at low prices, most of its products are private labels. In fact, it’s one of the secrets some stores can offer high-quality products at prices that often make us question their quality.

As an example, a Tequila you’ll get at TJ (its own private label) for, let’s say, $24 could be available under a different name and packaging and a slightly different expression for $56.

There are those who’ll argue that ShopRite is a better deal than Trader Joe’s. Which one’s better? That’s what I explored in a recent article of mine. It’s no secret that TJ’s is cheaper, but there is one reason that thousands flock to ShopRite instead.

All are 750 ml bottles, except Campo Azul which are 1-liter bottles.

The biggest downside to their overall great selection is that they only carry 1 type of Añejo tequila, and it’s their house brand. That doesn’t mean it’s bad, but there are no premium high-end tequilas like a Don Julio Añejo of Don Julio 1942.

They also sell 1 variety each of Sauza and Cuervo, but most of their products are terrible, so I’m not going to waste much space talking about them. If you must drink Sauza, at least get their Hornitos line. For Cuervo, get their Reserva de la Familia or Tradicional lines.

Remember, the only good tequila is 100% agave. Steer clear of anything that doesn’t proudly and prominently say that on the label clearly.

You want to know what is shockingly good? Trader Joe’s añejo tequila… holy crap, would recommend if you can get your hands on a bottle. Absolutely incredible for its price! pic.twitter.com/Y8zQhxWO2h

Trader Joe’s house brands of tequila are outstanding and manufactured by many well-known and respected distilleries such as Cazadores, El Mayor, and Exotico.

And as all good tequila is, TJ’s house brands are all 100% agave.

TJ’s Tequila Blanco is of high quality, and it goes for a song. You probably know El Mayor and Exotico, TJ’s Tequila, which scored 92 percent in a recent competition and won a Gold Medal, is made the maker of these brands.

He mentioned its vanilla (which he thought is surprising), pepper, hay, lemongrass, and of course, the agave. He remarked that its finish is long and lasting. He thought it’s a classy Tequila. By the way, I should mention that it’s 80 proof (that’s an ABV of 40%).

If you like to know more about liquor sales in general at TJ, check out a recent article of mine, where I explored the theme across all types of liquor, not just tequila. What really surprised me was just how amazingly cheap one of the top vodkas was there.

This tequila is pretty darn good, and is $9.99 for 1L at Trader Joe’s. pic.twitter.com/U4tVIViTG6

The manufacturer of Trader Joe’s Tequila Reposado is the company El Viejito from Guadalajara in Jalisco, Mexico. Under their brand label, El Viejito tequilas typically rate in the mid to high 80s on tequila review sites.

But private label manufacturers do change over time, so they may not always be the manufacturer.

By now, you probably know that a considerable chunk of Trader Joe’s products are private label items. Most stores don’t declare who makes products for them.

It’ll have a negative impact on the revenue of brand name items. That’s one of the things that’ll happen. Why would you pay $67 for a product if you could get nearly the same item at $47?

Can you buy Casamigos tequila at Trader Joe’s?

Trader Joe’s does sell Casamigos tequila, but not in every state that allows liquor in grocery stores. For example, it does not sell it at Trader Joe’s stores in California, but it does in New Mexico. Patrón tequila is the same way. It is not sold in California but is in other states.

But skip the Patron; Casamigos is much better.

Casamigos (House of Friends) was started by George Clooney and two of his friends. Mr. Clooney came up with the idea that they should create one of the best-tasting and smoothest Tequilas (for their own drinking pleasure).

In time, it’s become a multiple award-winning drink that Diego eventually bought for a billion dollars!

To see if the TJ’s near you sells Casamigos, simply put in your zip code on the Casamigos website and see if TJ’s shows up in the list that pops up.

Its ABV is 40%. Proof 80. Distiller: Productos Finos de Agave NOM 1416. The lovely-shaped bottle has a hologram around its neck. Perhaps a sign to prevent fake reproductions.

You can savor the exquisite blend of vanilla, cedar, chamomile, ginger, and pepper. It’s aged four months and has a neutral aroma, it has a straw color, and like all good tequilas, it’s 100% agave.

Can you get any tequila you want from your local grocery stores?

I am afraid the answer is: it depends. Even in 2021, some states don’t allow the sale of alcohol, and some have restrictions on the time stores can sell it.

This is what I explored in a recent article of mine. One of the things I shared is a convenient table showing you exactly what you need to know at a glance.

Trader Joe is one of America’s beloved grocery stores with a near cult-like following.

Its liquor selection is one of its main attractions. We explored if it only sells its own brand of tequila, if they’re any good, and who makes its tequila.

And we even revealed whether you could buy George Clooney’s tequila at TJ’s too.

If you’re lucky enough to live in a state that allows grocery stores to sell liquor, it’s well worth shopping at TJ’s for tequila and other spirits.