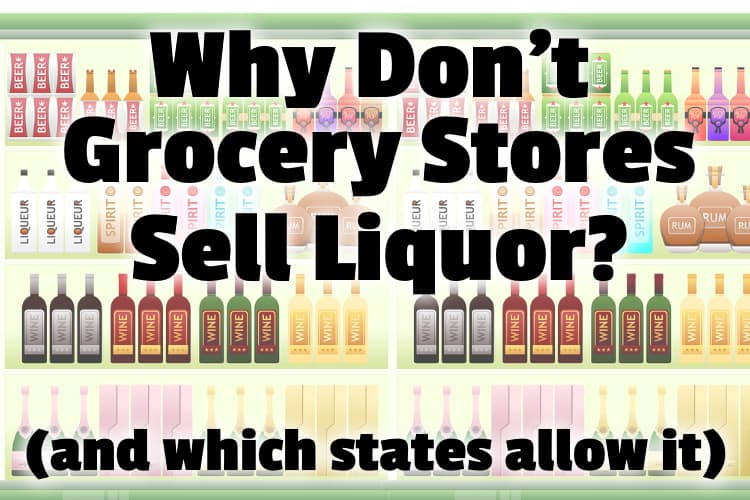 If you enjoy a good cocktail but find it inconvenient to buy liquor at a liquor store, you may wonder why don’t grocery stores sell liquor?

I decided to investigate and here’s what I learned:

After the end of prohibition in 1933, states were allowed to regulate alcohol sales themselves. But it resulted in a wide variety of laws from state to state. However, many states in the US do sell liquor at grocery stores. But, each county within the state can have its own laws regulating the sale of liquor.

But there’s a lot more to know than that!

For example, in Nebraska, you cannot purchase liquor until noon. But in Florida, there are no time restrictions on liquor sales, but you can only purchase liquor from liquor stores.

And other states limit the liquor licenses chain stores have so not all locations may actually sell liquor. It all gets very confusing and frustrating.

But have no fear! We’ve done the leg work to make sure you are well informed about the sale of alcohol in various states.

1. You can buy liquor at the grocery store

2. Stuff like Absolut and Ketel One are considered so fancy they have to be kept in the special locked glass cabinet pic.twitter.com/6R13s6wnCT

What states do not sell alcohol in grocery stores?

Alcohol is prohibited from being sold in grocery stores in Pennsylvania, Delaware, and Alaska.

Alaska and Delaware have no Sunday restrictions, but you can only buy alcohol at liquor stores. This is any alcohol – beer, wine, and liquor.

In fact, if you are in Alaska, you can’t even enter a licensed premises if you are under 21 years of age unless you are with a parent, guardian, or spouse that is of age. (source)

With a bar for every 60 residents, Alaska is notorious for having high rates of alcoholism.

As a result, they have a very high rate of violence and crime stemming from intoxication. So it’s no surprise that Alaska has such harsh laws regarding alcohol sales. They’ve even been known to arrest bar patrons for being too drunk. (source and source)

While you can’t purchase alcohol in all grocery stores in Pennsylvania, you can purchase beer from some gas stations. You can also purchase up to two six-packs of beer from local bars. (source)

The states listed below DO allow sales of liquor in grocery stores:

*Fun Fact: California does not allow alcohol to be displayed within five feet of the cash register if the establishment also sells motor fue;.

Each state comes with its own limitations on the sale of liquor in grocery stores.

Read this recent article for a more thorough explanation of what those limits are. You might find it interesting to know that Kentucky, home of Jim Beam, has some of the most confusing liquor laws in the country.

There are several states with a Sunday ban on retail alcohol sales.

But even states with Sunday sales bans have caveats. Most of the states listed below ban liquor sales, but still allow beer and wine sales. Some take it a step further by banning Sunday sales at certain times during the day.

Setting up grocery pick-up. Any other states still have “blue laws” about purchasing alcohol on Sundays? In TX, no alcohol sales on Sundays before noon, & no liquor stores open on Sundays at all. pic.twitter.com/QNNgdonupp

Why are they called blue laws?

Blue laws are designed to ban certain activities on Sunday for religious reasons, particularly to observe a day of worship or rest.

I found two theories about why they are called blue laws. The first one is the one that I had always heard: that the laws were originally written on blue paper.

However, the more likely reason is based on the 18th-century usage of the word “blue.” In the 18th century, “blue” meant rigidly moral in a disparaging sense. (source)

They were originally enacted to encourage church attendance and restrict activity to that which was deemed worthy of observation on the Sabbath.

The first blue law was enacted in colonial Virginia in 1610. Though it wasn’t called a blue law, it mandated church attendance on Sundays. The law also prohibited unseemly behavior.

Drinking alcohol or public displays of affection were subject to penalties that included large fines or confinement.

Eventually, blue laws evolved to ban the sale of tobacco and alcohol as well as unnecessary labor. Some areas also prohibited some kinds of entertainment.

What states still have blue laws?

Many states still have blue laws in place, but most of them have been repealed in the United States.

Even so, the Supreme Court has held that blue laws are constitutional. Blue laws ensure that mail carriers get a day of rest, guarantee a day of rest for religious reasons, and protect workers and families.

The states below currently have blue laws in place:

Did I answer all of your questions about why grocery stores don’t sell liquor?

Trying to purchase alcohol, especially liquor, while you’re traveling from state to state can be very frustrating.

Laws are regulated at the state level and many states pass that responsibility down to counties and cities.

I’ve discussed a few of those regulations including blue laws and how they affect alcohol sales in certain states.

While this is a pretty thorough guide, you should still check the local laws. That’s especially true if you are going to a state that has different laws for different counties.