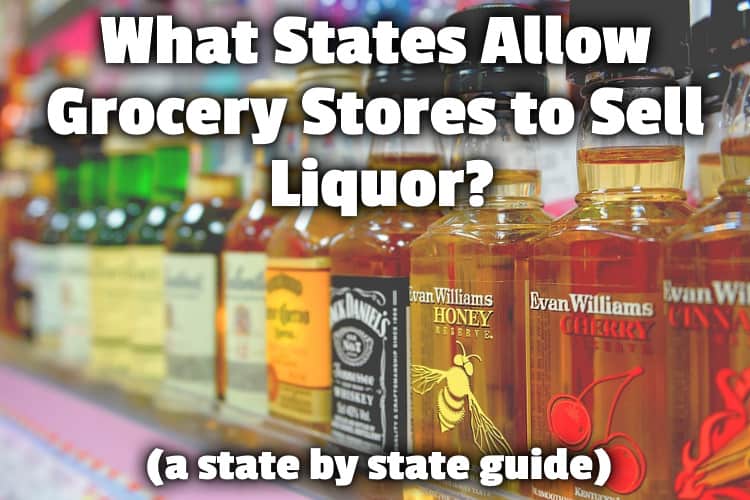 After the end of prohibition in 1933, states were allowed to regulate alcohol sales themselves. But it resulted in a wide variety of laws from state to state. So many have wondered what states allow grocery stores to sell liquor?

I decided to investigate and here’s what I learned:

The states listed below allow sales of liquor in grocery stores:

But there’s a lot more to know than that!

For example, in Nebraska, you cannot purchase liquor until noon. But in Florida, there are no time restrictions on liquor sales, but you can only purchase liquor from liquor stores.

And other states limit the liquor licenses chain stores have so not all locations may actually sell liquor. It all gets very confusing and frustrating.

But have no fear! We’ve done the leg work to make sure you are well informed about each state’s alcohol laws.

Hi my name is Rachel and I am addicted to buying bourbon.

One thing I do not miss about Texas- no liquor sales on Sunday. pic.twitter.com/LpXg2DYtWa

Can you buy liquor on Sundays in the states that allow liquor in grocery stores?

The states listed below allow sales of liquor in grocery stores on Sunday:

*California does not allow alcohol to be displayed within five feet of the cash register if the establishment also sells motor fuel. (Because it encourages drinking and driving???)

Indiana does allow the sale of liquor in grocery stores. However, there are no alcohol sales at grocery stores on Sunday whatsoever.

West Virginia grocery stores are prohibited from selling liquor all day on Sunday.

How is alcohol regulated by the law?

Prohibition ended in 1933 with the ratification of the 21st amendment.

Since that time, alcohol has been regulated by a combination of federal, state, and local laws. These laws regulate the manufacturing and the sale of alcohol, as well as the drinking age.

The 21st amendment is the primary federal law governing alcohol policies. It also gives individual states control over whether to allow the sale of alcohol in the state at all.

It also regulates importing, distribution and possession of alcohol within the state. Some states offer local governments control over alcohol policy development and enforcement. Other states control alcohol policy at the state government level.

Unfortunately, the confusing state of affairs as it relates to alcohol policy is the drawback of giving states and local governments control over alcohol policy.

However, even with the flexibility of some laws at the state level, Congress maintains the power over certain alcohol policies, such as the minimum legal drinking age.

Which states have state-owned liquor stores?

In some states, the state has complete ownership and control over liquor stores.

This means that the stores generate income for the state. This money can be put towards education, infrastructure, or any other government needs. States also offer standardized training for liquor store owners and can restrict the number of liquor stores across the state.

Considering how many extra dollars are generated for the state, it’s interesting that there aren’t more states doing this. The states that currently have state-owned liquor stores are:

An Overview of Alcohol sales 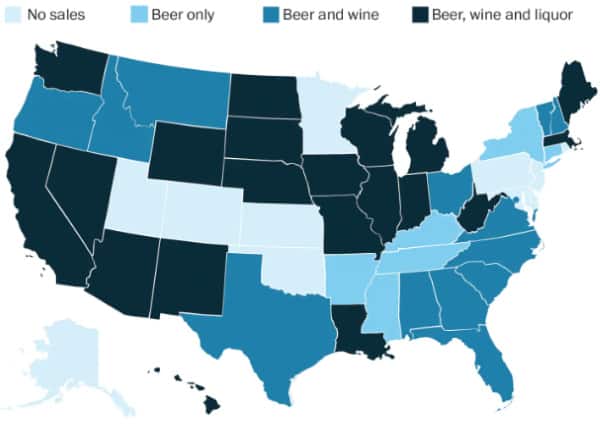 This handy map put together by Christopher Ingraham of the Washington Post shows a birds-eye view of state alcohol sales in supermarkets.

Alcohol is prohibited from being sold in grocery stores in Pennsylvania, Delaware, and Alaska.

Maryland laws vary widely from county to county. Consult this county by county list to get the complete breakdown of laws.

Many states still prohibit the sale of alcohol on Sundays. Those that do allow sales on Sunday often can’t sell it until later in the day.

Check the state laws if you are planning on traveling to another state. It can be very frustrating if you are trying to buy alcohol, only to find out when you get to the register that you can’t purchase alcohol on Sunday.

Utah, Colorado, Kansas, Oklahoma, and Minnesota allow only beer to be purchased at grocery stores.

However, grocery store sales are limited to beer with 4% ABV or lower. In Utah, beer over 4% ABV must be sold in state-run stores. Colorado, Kansas, Oklahoma, and Minnesota require that beer over 4% ABV be sold at liquor stores.

Of interest, Oklahoma requires that beer sold at liquor stores be sold at room temperature. (less likely to crack one open on the way home???)

New Jersey is interesting. While they do not limit the ABV of beer, grocery chains are only allowed 2 liquor licenses for the entire state.

This means that only 2 locations for each chain can sell beer in their stores. As a result, most grocery stores do not sell alcohol. Additionally, many establishments have a BYOB policy.

Liquor licenses are so expensive in New Jersey that they actually allow patrons to bring their own beer and wine for consumption.

Tennessee, Kentucky, Alabama, Mississippi, New York, and Connecticut all allow beer to be sold in grocery stores. However, there are some things you need to be mindful of:

Kentucky is said to have some of the most confusing liquor laws in the country.

They have wet, dry, and “moist” counties. It might be a good idea to check out their official wet/dry map before trying to purchase alcohol in Kentucky.

Alabama and Mississippi have several dry counties as well. Their official wet/dry lists can be found here and here, respectively.

Note: 40oz bottles of beer or malt liquor are not sold in Florida. The maximum available size is 32oz.

New Hampshire homebrewers take note: New Hampshire limits household beer or wine production to 100 gallons per year if you’re doing it by yourself (200 gallons if someone else helps).

Fun fact: As the flagship home of prohibition, Westerville, Ohio was once known as the “Dry Capital of the World.” During a period known as the Ohio Whiskey Wars, a businessman named Henry Corbin owned a saloon and sold alcohol despite local laws banning it.

The building was blown up in protest by residents multiple times.

The states listed below allow sales of liquor in grocery stores:

*Fun fact: California does not allow alcohol to be displayed within five feet of the cash register if the establishment also sells motor fuel.

Trying to purchase alcohol while you’re traveling from state to state is very frustrating.

Laws are regulated at the state level and many states pass that responsibility down to counties and cities. We’ve gone over many of the laws, and have hopefully made it a little easier to navigate.

While this is a pretty thorough guide, you should still check the local laws. That’s especially true if you are going to a state that has several wet, dry or “moist” counties.

One thing more and more shoppers do these days is to order their groceries through companies like Instacart.

You can order beer, wine, and liquor through Instacart. But one thing you may not know is which stores Instacart raises the prices on.

Yes, it’s true. While they don’t do it with all stores, Instacart does bump prices up an average of 15% on many grocery stores. Check out which ones in a recent article.

If you enjoy a good cocktail but find it inconvenient to buy liquor at a liquor store, you may wonder why don't grocery stores sell liquor? I decided to investigate and here’s what I...