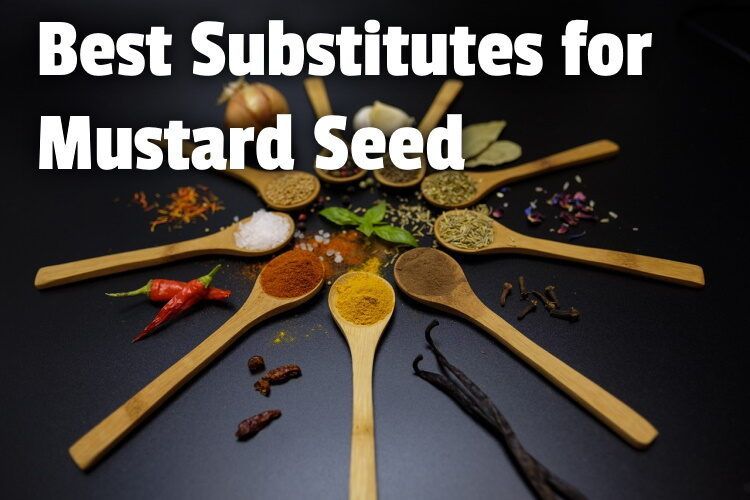 Mustard seed is a common spice and popular ingredient. Its natural spiciness adds a unique flavor to cooked foods. But what if you’re in a pinch and it’s not on hand? In that case, what is the best mustard seed substitute?

The overall best dry spice substitute for mustard seed is to use equal parts caraway seed, turmeric, and cumin, and once mixed, substitute one-for-one with the mustard seed in the recipe. However, prepared or stoneground mustard can also be substituted.

But if you use any form of prepared mustard (honey, dijon, yellow, etc.), just be aware they are all made with vinegar. So adjust any acids (vinegar or lemon/lime juice) called for in your recipe accordingly.

These tiny seeds can be black seeds, yellow seeds, and white seeds, yet they come from the same family but different variants of the same mustard plant. Apart from its culinary uses, mustard oil is used for medical purposes.

Let’s cut to the chase and learn about these different substitutes for mustard seed.

We put some onions, sauerkraut, Duesseldorf mustard on the smoked brats. Then we had German potato salad with pickled Brussels sprouts. This entire meal was to honor my Korean heritage on Labor Day pic.twitter.com/TGaB6KJhz0

— Bad Choice of Handle For a Food Writer (@FartSandwich) September 5, 2022

Duesseldorf Mustard is a type of German mustard that’s made with wine, not vinegar. Its flavor is milder than that of most other mustard. It’s great with poultry and fish. But note that it’s spicy.

So, you may want to use a bit less than what the recipe calls for with regard to mustard seed. But if you don’t mind, you can also use it in a one-to-one ratio.

German mustard is a type of wholegrain mustard.

It’s made from black mustard seeds or brown mustard seeds and has a strong, pungent flavor. It’s mainly used as a condiment for sausages and meat and has a thick, creamy flavor.

It’s made with mustard seeds, water, vinegar, and spices.

Ideally, use it in recipes that call for a milder flavor. German mustard can be used in a one-to-one ratio.

Wasabi is a root vegetable that belongs to the mustard plant family.

It’s a staple in Asian cuisine, and its unique taste is similar to horseradish or mustard. Its strong flavor is more pungent than that of regular mustard seed. It’s the spicy green paste that’s often served with sushi.

You can buy wasabi paste or wasabi powder.

It’s a rare condiment, and as such, it’s not easy to find it outside of Japan. You may find it in the international aisle of some supermarkets or grocery stores.

It’s great in dishes such as sushi, sashimi, soba noodles, and tempura. It’s believed to have health benefits such as boosting the immune system, reducing inflammation, and fighting cancer cells.

You can use a 2-to-1 ratio of wasabi paste to mustard seeds.

Grilled T bone steak, medium rare, with horseradish, grilled jalapeños, onions and bell pepper, and a sweet potato. It was delicious, and I have leftover steak for tomorrow! 😀 pic.twitter.com/YspikL293s

Horseradish root has a pungent and slightly spicy flavor that makes it a good option if mustard seed is not available.

What’s good about it is that it’s from the same botanical family as mustard seed, and it has a similar flavor profile. And you only need a small amount for its effect to kick in.

You can choose to buy prepared horseradish. It’s often stored in vinegar and is often spicier.

Or, you can buy fresh horseradish. And there’s horseradish powder that’s used as a rub for beef or added to hamburgers.

Its flavor is pungent, so you may use a smaller amount than the recipe recommends. But if you don’t mind, you can also use a one-to-one ratio as the pungency dissipates after a while.

Wholegrain mustard is a great substitute for mustard seed.

It is made from coarsely ground mustard seeds. It has a coarse, slightly pasty texture and is an awesome condiment for sandwiches and hotdogs and an ingredient in sauces and dips.

It’s of great nutritional value, and it is an excellent source of fiber and protein. It also contains iron, calcium, magnesium, minerals, and vitamins.

Stoneground mustard is one of the best substitutes for mustard seed.

It is made of ground brown mustard seeds. It’s mild and has a coarse texture, and doesn’t contain a lot of vinegar like regular mustard.

So, it’s good for infusing your dish with extra flavor. It’s highly versatile.

You can use it as a coating for chicken or fish or as a vinaigrette. And you can also use it in sausages, meat rubs, cheese, vegetables, barbecue sauce, dressings, roast beef, and more.

Creole mustard has a grainy texture and is similar in taste to regular mustard. This is because it’s made with whole mustard seeds instead of ground mustard seeds. It can be easily mistaken for spicy brown mustard.

But it’s spicier and sweeter than regular mustard. It is similar to Dijon mustard and is made with vinegar instead of white wine.

It’s a versatile ingredient that can add more flavor to sauces, dressings, and marinades. It’s also great as a sandwich dressing or dip.

You can substitute the same amount of creole mustard as the amount of mustard seed the recipe calls for.

The final special of 2021 is….Chinese takeout burrito. Crab Rangoon, Brooke’s fried rice, sesame slaw, sweet n sour fried chicken, an eggroll, scallion and a lil hot Chinese mustard. Be safe out there and cheers to the end of 2021. pic.twitter.com/QpZZpKZyY7

Chinese mustard is one of the best mustard seed substitutes. It is made of brown mustard seed and is spicy and pungent.

When tasted, its heat is similar to that of horseradish. You can buy it premade, or you can make it at home by mixing the dry mustard powder with water.

Why are regular mustards not as spicy as Chinese mustard? It’s because enzyme reaction in prepared mustards is toned down as additives such as flour are added.

In addition to this, the type of mustard seed used in Chinese mustard is brown, and it is stronger than the black and white variants used in making regular mustard.

One of the great things about this common ingredient is that it’s used in a variety of Asian dishes, and you can use it to add a unique flavor to almost any of your dishes without adding extra calories!

Spicy brown mustard is dark yellow and has a coarse texture.

It’s made from vinegar and black or brown and black mustard seeds that have been crushed. It’s very spicy and, as such, has a distinct flavor.

It can be used as an ingredient in high-heat cooking without any anxiety that the vinegar would separate. It’s a great way to add a unique flavor to many dishes. It can be used in a one-to-one ratio.

Ever wondered how long mustard lasts before it goes bad?

Find the answer in a recent article I published. I explained how to know if it’s gone bad and if it’s okay to eat expired mustard. But I also shared how long it lasts after it’s been opened and kept in the fridge.

Dijon mustard is not as hot or sharp as a mustard seed, but it’s incredibly close to it.

It’s a good source of vitamins A and C. It can be used in pork, beef, fish, and chicken. What’s great about it is that it can be used to add flavor to a dish without overpowering it.

This tasty, prepared mustard can be used in a variety of meals. For example, you can use it as a spread or smear it on beef or turkey.

You can use it in a one-to-one ratio.

Caraway seeds have a similar taste to mustard seeds.

It’s a highly medicinal spice. It’s pungent, warm, and spicy and is an excellent substitute if you want to add a depth of flavor to any meal.

Use in a one-to-one ratio.

Turmeric is a staple in Indian cuisine.

It is a fine powder that has a bright yellow color, but some variants are a dark orange. It has a peppery flavor and is pungent like mustard seed. As such, it’s a perfect substitute for mustard seed.

And unlike mustard seed, it doesn’t cackle when you pour it in hot oil.

It has a milder taste than horseradish or caraway seeds, and it is a tad less intense than mustard seeds. So, you may want to add a little bit more than you’d have used if you had mustard seed on hand.

You may want to use it with your favorite spice rub if you’re into really spicy food.

Cumin seeds do not taste like a mustard seed, but it has a similar pungent and spicy profile. So, it’s a good alternative if you want to experiment with something slightly different.

It has a citrus flavor and is used a lot in Indian cooking, especially in curries. If you want a really intense flavor, you could combine it with wasabi or horseradish.

If you’re using it alone, simply use it in a one-to-one ratio.

Whether it’s homemade mustard or one you got from the local store, mustard seed’s pungent, aromatic, nutty flavor makes your meal more delicious.

In the article, we learned about 13 different substitutes that would equally enrich your meal when you’re in a pinch and mustard seed is not on hand.

Image by Bruno /Germany from Pixabay

link to Does Soy Sauce Go Bad? How Long Does it Last?

Soy sauce is one of those things most of us only buy every few years and rarely use. After all, it takes a long time to finish a bottle as we only use a little bit each time. So, how long does soy...

Continue Reading
link to How Long Does Mustard Last Before It Goes Bad?

Mustard is a popular condiment that’s used all over the world. But does it spoil? Should you refrigerate it after opening? How long does mustard last before it goes bad? If left unopened in the...