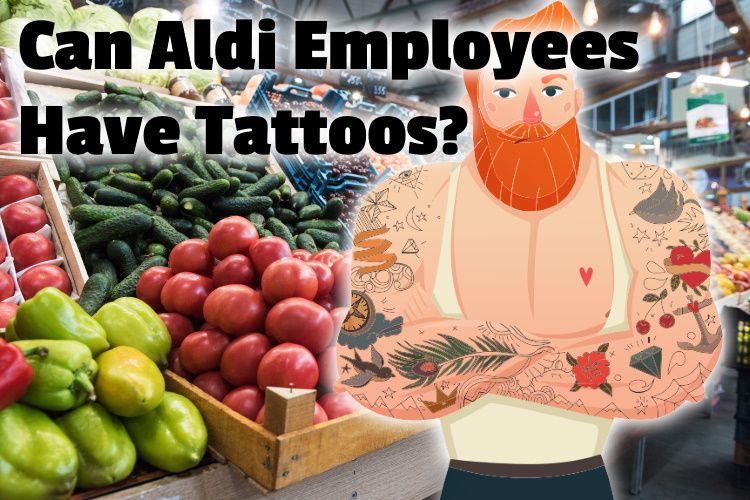 For some, tattoos are a way of expressing their uniqueness. However, having a visible tattoo is frowned upon by many employers. So many in the grocery industry have wondered can Aldi employees have tattoos?

Yes. Aldi employees can usually have tattoos. The Aldi dress code, however, is vague and only states that the code varies by department and location. While the tattoo policy does seem to vary by division, most stores do allow visible arm tattoos as long as they are not deemed offensive.

I have had over twenty years’ experience as a general manager in this industry.  And I still recall a time where even places like Whole Foods were pretty restrictive on tattoos and piercings.

But as those things have grown in popularity, most employers have loosened their standards.

In the next few paragraphs, I’ll share some vital things Aldi expects from its employees, and the grocery industry, in general. Let’s get started by finding out if there’s an Aldi tattoo policy?

An older man I don’t know just came up to me in Aldi and upon seeing my tattoos, asked me “why do people get tattoos on the backs of their legs and other places they can’t see?” Some men just really feel the need to ask a stranger any old question that pops into their head 🤪 pic.twitter.com/jW9WsqIFUk

Their dress code is actually really vague and states “The ALDI dress code differs among the different roles and departments. For example, “smart casual” wear is expected for office positions while store & warehouse positions abide by a more functional, uniform dress code.” (source)

The managers of each division and store make the decisions.  The company’s code of conduct is silent on tattoos and piercings. So, it’s wise to “blend in” if you’re seeking work in a conservative establishment, or keep the tattoos covered.

I understand: Your tattoos are probably an expression of your individuality and uniqueness. I get it. I have several myself.

Well, companies are also unique entities, and they also express themselves the way they’d like to be perceived. A way that reflects their philosophy and brand.

Are you expected to wear uniforms at Aldi? Hair color? Piercings? Let’s find out. Shall we?

i just met a girl with this tattoo in aldi in germany so if you’re seeing this i love you and i was this girl with a red shirt 👀🥺 pic.twitter.com/7mq29eliDB

As I said above, the code differs depending on the role and department.

But, essentially, it’s “smart casual” for those in managerial positions. In comparison, those who work in the stores and warehouses are expected to wear uniforms. This is the official policy.

That’s simple, right? If you’re going for a particular role, that’s what determines the kind of dressing that’s expected.

But unlike Whole Foods, where I spent most of my life, Aldi encourages men to wear a suit and tie to interviews and women to wear a blouse and dress pants combo or a dress. That’s pretty formal and conservative for a grocery store. So just understand that mentality if you want to work there.

You aren’t likely going to have to wear a tie to stock groceries or cashier, but it speaks to the company’s sensibilities as a whole.

Let’s segue into what grocery stores look for when hiring, and in this case, what does Aldi look for? That’s exactly the next thing we’ll look at.

A guy just came into Aldi and said “what does your dad think of all those tattoos?” Bold of you to assume I have a dad pic.twitter.com/VCNR5RfEJz

What does Aldi look for when hiring?

Like most things in life, success depends on being adequately prepared.

So, make sure you prepare well while applying. Aldi pays well. But are they among the top-paying grocery stores?

If pay is a factor (and isn’t it for all of us) make sure to check out my recent article where I get into all the top grocers and how they compare pay and benefit-wise.

You’ll like to be hired, that’s understandable. Aldi, on their part, wants to employ people that’ll add value to their business. So, one of the best things you could do is to be a person of value and to ensure you sustain those habits, even after you’ve been employed. The specifics of what you need to do apply depends on the specific position or department.

The following are some of the vital things to keep in mind:

In a recent article of mine, I covered all the vital things you’ll need to know to get a job in a grocery store.

I explored all the basic job requirements, how quickly one can get hired, the common positions available, what to wear to the interview, and I also shared the questions you’re likely to be asked (and the model answers).

You know that how you dress is vital, so you might be wondering what if your hair is colored? Do you stand a chance?

My hair is turning purple and I’m ok with this. pic.twitter.com/DKVzDcAocv

No, they don’t. At least not colors way outside the normal range of human hair color.

Aldi is a conservative company that’s naturally concerned about its customers’ perceptions. It’s best to keep your hair natural.

But that being said, highlights, streaks, or even blue tips have been reported in many Aldi stores around the country. As with tattoos, it has a lot to do with the division and store managers and their preferences.

But the best way to gauge it is to take a look at the Aldi store near you and look at the appearance of the employees. Do you see tattoos or colored hair? If not, then chances are that store or district manager doesn’t allow it.

Now, let’s look at something a lot of people are concerned about: Drug tests.

There’s a mandatory urine test before you’re formally employed, and there’s a test if an employee is involved in an accident. The reason for the latter is to check whether the person was under the influence of a drug when the accident occurred.

The test is to check if applicants or employees use cocaine, opiates, pot, PCP, or amphetamines.

If the test is negative, the results are usually received in a day. But it could take up to a week if it’s positive, as further screening is done to confirm the result.

Drug or medical tests are a standard procedure when you’re employed in big companies.

That being said, at least when I worked for Whole Foods Market, there was never any drug testing. And if there was, a lot of the top company leaders would fail. But that’s for a different blog!

These tests are not merely to check if a person is a drug user, but to confirm if they’re fit enough for the job.

Employees spend a considerable amount of their time at work, and some positions are really demanding. Some also require the use of pallet jacks, forklifts, knives, saws, and other heavy equipment.

So while I’m personally not a fan of drug tests, I do understand why an employer might have that policy in place.

But Aldi isn’t the only grocery store to drug test. And even though Whole Foods doesn’t, what other grocery chains do?

In a recent article of mine, I went into great detail on what you need to know about grocery store drug tests.

For example, I wrote about all the major grocery stores that conduct tests, what the test entails, whether employees are informed if they passed the test, and if one’s allowed to retake the test, in case one failed the first time.

Hopefully, now you know whether Aldi employees can have tattoos

As I showed in the article, Aldi doesn’t have a policy on tattoos and is generally accommodating.

Besides, not all major stores conduct drug tests. In it, you’ll find out those that don’t. So, if there are reasons, you’re a tad uncomfortable about the tests, you can still get a good job.

In this article, I covered a lot. We looked at Aldi’s tattoo policy, what’s required to get a job at Aldi, the dress code, whether colored hairs allowed – the drug tests that are often required before one’s employed.

I also shared links to some recent articles of mine, where you’ll find a goldmine of info, such as all the vital things to know to get a job at a grocery store and the stores that pay the best.