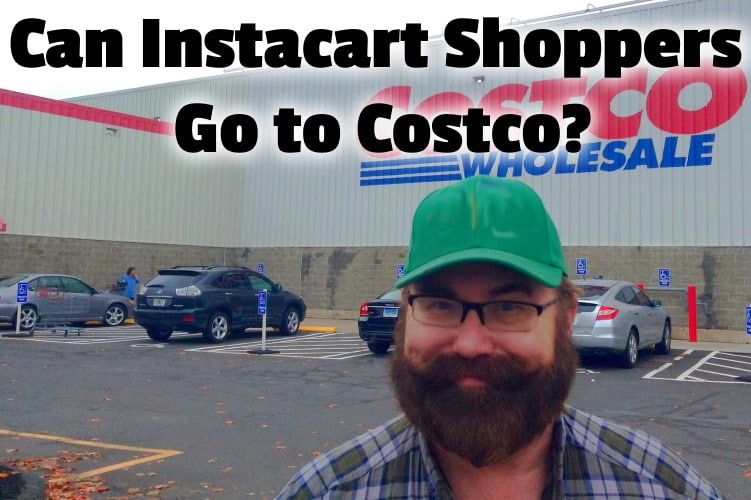 I decided to check it out and here’s what I discovered:

Yes, Instacart Shoppers can go into Costco. They do need to wear an Instacart uniform or have the Instacart lanyard. Shoppers can also show their Instacart profile via a smartphone to identify themselves. They cannot, however, shop for themselves unless they have their own Costco membership.

I am quite aware of the online grocery delivery space, seeing as I spent twenty years as a general manager at Whole Foods.

I’ll share a few that relate to Instacart shoppers and Costco. Do Instacart shoppers have to wait in the cash register lines at Costco? And can non-members can buy from Costco through Instacart? And what if the customer you’re shopping for doesn’t have a Costco membership?

Let’s dive right in to clear all the doubts.

DoorDash is a great alternative to working for Instacart.

Costco delivery via @Instacart = super sweet honeydew with lime and @TajinUSA for midmorning snack. @gdanielagalarza wish you were here. pic.twitter.com/3M9UXCVume

Do Instacart Shoppers have to show ID to enter Costco?

We are now aware that an Instacart Shopper can go to Costco, but how do you enter the store?

Since you’ll be going into the store as a representative of Instacart, it makes sense that you’ll need a valid means of identifying yourself. If you are wearing your Instacart uniform or have the lanyard, you don’t need to show an ID.

You could also use your Instacart profile via a smartphone to identify yourself.

Do Instacart Shoppers always need to be attired in a uniform and have a lanyard? No. Your actual ID or a scannable copy that has your picture will suffice.

Now, let’s check out if you’ll have to join the queue to shop at Costco?

Do Instacart Shoppers have to wait in line at Costco?

As I have mentioned before, Instacart and Costco are partners.

As such, they are interested in what’s of mutual benefit. Think about it. If you owned a warehouse club, wouldn’t you love to have a partner who can help facilitate sales and delivery? In my recent article, I explained in some detail how Instacart works.

It would be grossly inefficient if Instacart shoppers have to wait in line (just like everybody). After all, they always have deadlines to meet. You’ve probably seen the adverts that promise that groceries will be delivered in two hours.

So, Instacart shoppers don’t have to wait in line.

Some Costco locations give preference to Instacart shoppers (and, not to the detriment of the other general shoppers).

In some cases, they’re allowed to come in hours earlier before the Costco opens its doors to the general public, and a few hours after it’s closed to the public.

In some cases, there’s a dedicated staging area for Instacart shoppers, and they can go in and out of Costco through another door.

Can an Instacart Shopper buy items for themselves at Costco?

No is the short answer.

Not unless you have your own Costco membership already. If you’re thinking you could just buy a few things while you’re there doing a shop for a customer, think again.

But either way, a Costco account is necessary to make a purchase. Shoppers who try and make a personal purchase would most likely be fired!

You can now find @RWGarciaSnacks on @Instacart! Get your favorite bag of chips or crackers delivered straight to your pantry.

With selections from @Safeway @raleys @Costco and many more! pic.twitter.com/DerSipZVQl

Does Instacart mark up prices at Costco?

The markup varies between 10% to as high as 23%. In a recent article of mine, I explained in-depth why Instacart charges more. The markups are not applied in all stores.  In the article, I shared other vital info you’ll need to know about how Instacart works.

Are the markups too high? It depends on the individual. In most cases, they’re not. To put things in perspective, you’ll need to estimate how much you think your time’s worth if you were to go to the grocery store (if you’re not an Instacart shopper, just a regular person), go from aisle to aisle, and go back home.

What’s the estimated dollar cost of the time spent?

It also helps to remind oneself that these online grocery delivery services are businesses that employ thousands of people, some full-time, others, part-time. So, the markups are their primary source of revenue.

Another vital thing that’s related to markups is tipping.

Should you tip Instacart drivers and shoppers? Tipping is a normal part of how business is done. It’s a sign of appreciation, and it’s also a way to encourage others who provide vital services and goods for us.

In another recent article of mine, I shared some info on this issue. How much should you tip? What’s recommended by Instacart? Should you tip in cash? You’ll find the answers to this and others in the article.

🛒 No Costco membership? No problem. If you use Instacart for Costco delivery, you don’t need a membership. https://t.co/L9a5j2QK0r pic.twitter.com/ol1D2dUGyp

Can a customer who isn’t a Costco member buy from Costco through Instacart?

Yes is the short answer.

So, if you’re not a member, you’ll have to be ready to pay a 5% surcharge to do the shopping.

It’s also important to know that some of Costco’s prices are steep. Some can be 20% higher than what’s ordinarily charged in the stores. So, if you’re wondering if it’s worthwhile, I’ll suggest you make a comparison.

If you’re incredibly price-sensitive, it’s smart to make the comparison. Of course, you’ll have to make an estimate of the cost of driving to a grocery store to do your shopping and of the time involved.

If you’re a very busy person who loves convenience, it makes a lot of sense to use Costco through Instacart. It’s smart to outsource grocery shopping while you focus on the more important stuff. However, you’ll have to be an Instacart user to be able to take advantage of this option.

Before I wrap up, let me share a recent article of mine, where I wrote about Dash Door and Walmart’s alliance. It’s an informative complement to what we’re explored in this article.

Did I cover all you wanted to know about Instacart and shopping at Costco?

Online grocery delivery has taken the world by storm. And, it’ll continue to get stronger as AI (artificial intelligence) becomes more powerful.

In the preceding paragraphs, we’ve learned that Instacart shoppers can indeed do their shopping at Costco, they do need IDs and might have to wait in lines but not always.

We also learned that Instacart marks up purchases made at Costco. This is understandable; after all, it’s a business. The markups vary from about 10% to 23%. They don’t charge extra on products bought from stores they’re partners with.

DoorDash is a great alternative to working for Instacart.

link to Can Instacart Shoppers Skip Lines? (Yes! Here's how)

If you are new to working for Instacart as a Shopper you may not know all the tricks yet. But even customers who see people cutting in front of them have wondered can Instacart Shoppers skip...

Continue Reading
link to Can Instacart Shoppers Rate Customers? (Yes, and no)

Being a Shopper for Instacart or any other grocery delivery service has its pros and cons. The flexibility to work when and where you want is great. But one bad customer can sour that quickly. So...