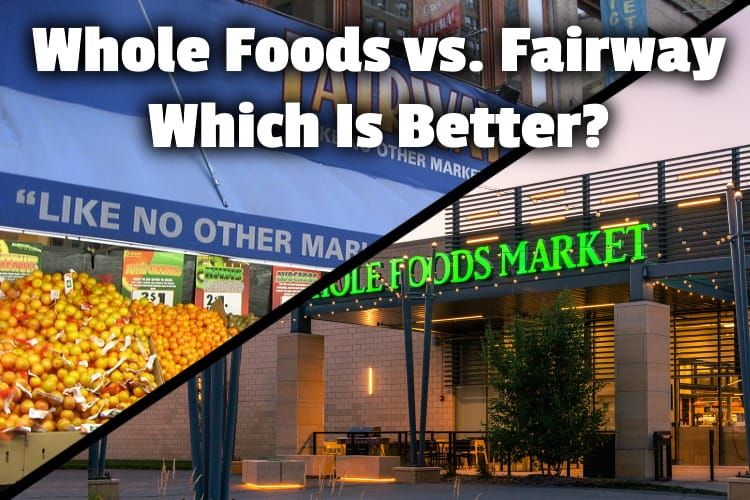 Fairway Market is known to attract shoppers seeking fresh baked goods, cheeses, and specialty foods. Since the opening of its first store in 1933, it now has a treasured presence in the area of New York. But do you know which is better when it comes to Whole Foods vs. Fairway Market?

Read further to find out what my research uncovered!

Whole Foods Market is famously known as the world’s largest natural and organic supermarket chain. So if you’ve been shopping at Whole Foods for a while, you might be wondering if the brand nicknamed a “Whole Paycheck” is worth it, or should you consider shopping at Fairway?

In addition, what is making Fairway lose its business lately, and are they going out of business? Keep reading for the details.

Don’t think I’ll be shopping at the new Whole Foods in town. pic.twitter.com/zn0n6cej7K

Is Whole Foods cheaper now that Amazon bought it?

Whole Foods is still among the most expensive grocery stores. But the short answer is yes. Whole Foods Market prices are cheaper since Amazon bought them.

In 2017, Amazon acquired the company and has made price cuts three times. In fact, they cut prices at Whole Foods an average of 20% in 2019.

But the price cuts aren’t across the board.

Amazon Prime members get up to 40% off all products from select brands. These include 35% off all Justin’s brand products, 40% off all Kite Hill’s plant-based products. Members even get 20% off ready-made sandwiches and wraps. Amazon has gone further to include weekly exclusive deals store wide.

Check out my recent article where I give out all the details! I’ll compare prices, quality and give you a behind the scenes scoop based on my 2+ decades working with Whole Foods!

Is the Fairway Market expensive?

Fairway has a large variety of specialty items, including meat and organic produce, much like Whole Foods. Customers swear by their bagels, hand-sliced fish, and a wide range of cheeses.

Produce and meat are not very far off at both Whole Foods and Fairway because they both offer a variety of wild-caught fish and grass-fed beef.

Are you a meat lover? Here’s my recent article on which grocery store has the best steaks! I talk about grades, cuts, quality, and so much more. Your next steak purchase will be the best one yet!

With its many weekly promotions and coupons, you can easily save when shopping at Fairway Market. On any given day, Fairway has up to 50 active coupons. A few of these such as the $10 coupon can be used up to 5 times a day. Others are $15 and $20 off coupons.

If you use the Instacart grocery delivery service, there is a $10 off coupon for your first order.

Fairway’s free shipping promotions offer an even bigger way to save. If you’re a coffee-lover, order four bags of coffee or loose tea, and just like that, you get free shipping. Some free delivery promotions are only available online.

Is Fairway going out of business?

The short but no less painful answer is Yes! Fairway Market has been struggling with its private equity debts for years now, and they have finally been caught up.

Fairway first filed for bankruptcy in 2016. Their expansion plan failed to generate enough sales to offset their debts, and competitors like Whole Foods and Sprouts made it that much harder to stay afloat. They eventually emerged from bankruptcy with new owners, but the downward spiral continued.

Now less than four years later, Fairway Market has filed for Chapter 11 bankruptcy. Three successful bidders have purchased six of its fifteen stores in their March auction. The remaining stores will be sold through a supervised sale by the bankruptcy court.

Both Whole Foods Market and Sprouts Farmers Markets have caused Fairway’s sales to plummet since they came into Fairway’s territory.

But Whole Foods and Sprouts are even closer competitors with each other. Check out my recent article to get a scoop on which of the two supermarket chains is better. Just click the link to check it out!

How many stores does Fairway have compared to Whole Foods?

It was little more than a produce stand back then, but by 1997, they expanded to include a café. Since then, Fairway Market has opened 13 other locations, 6 of which have now been sold.

At its peak, Fairway Market has been set up in 15 locations while Whole Foods has 500+ stores.

Its Harlem location is especially worth mentioning. It has a 10,000 square foot space called the “Cold Room.” Customers can browse the enormous freezer that is filled with the store’s meats, seafood, dairy, and beer.

Their 500 locations are spread throughout North America. Whole foods also acquired seven Fresh and Wild stores in the UK, adding to the existing 500. As shown on the Whole Foods Market History site, a lot of their growth came from buying other smaller chains.

Ironically back when I started with Whole Foods Market in 1988 (I left the company in 2013), there were only 5 stores. So the humble beginnings of the now giant empire seem quaint in retrospect.

I went wild in Whole Foods today… 😭 spent WAY too much money on food but few stores be rocking with the bomb, plant based options pic.twitter.com/lcLaIb9FcM

The short answer is partially yes, but not really.

The biggest winner during the March bankruptcy auction was the owner of Village Super Markets. That company purchased 5 of Fairway’s stores.

Amazon did purchase two Fairway leases, but not actual Fairway stores. Amazon plans to open new stores at the locations of the 2 leases they purchased. As far as anyone currently knows, those 2 stores will be something new, and NOT Whole Foods Market stores.

Also included in the bid was Fairway’s production and distribution outlet. Village Super Market went as far as buying the parking lot of the fifth store but not the store itself. All this was purchased for approximately $76 million.

You might now be wondering how ShopRite, another hugely successful supermarket chain. compares to Whole Foods Market.

Here’s my recent article where I dissect which of the two comes out on top based on quality, pricing, service, and the overall customer experience.

This is a must-read, so click that link to view it on my site!

I hope I have covered everything you needed to know about Whole Foods vs. Fairway?

At almost a century year old, Fairway has been a neighborhood anchor for New York and surrounding counties. While it may not have been able to stay ahead of its large competitors, it’s no surprise that it is going out of business. Whole Foods has a reputation for quality that just never disappoints.

Their stability is unquestionable at this point.

In this article, we compared Whole Foods and Fairway Market. You learned that since Amazon acquired Whole Foods, there have been significant price cuts.

But I also talked about how you can make your shopping experience at Fairway cheaper with coupons and promotions. Lastly, I spoke about how Fairway is going bankrupt and the results of their auction in March.

Whole Foods Market at Woodbury City Place by Tony Webster and IMG_1663 by Austen Squarepants are licensed under CC2.0