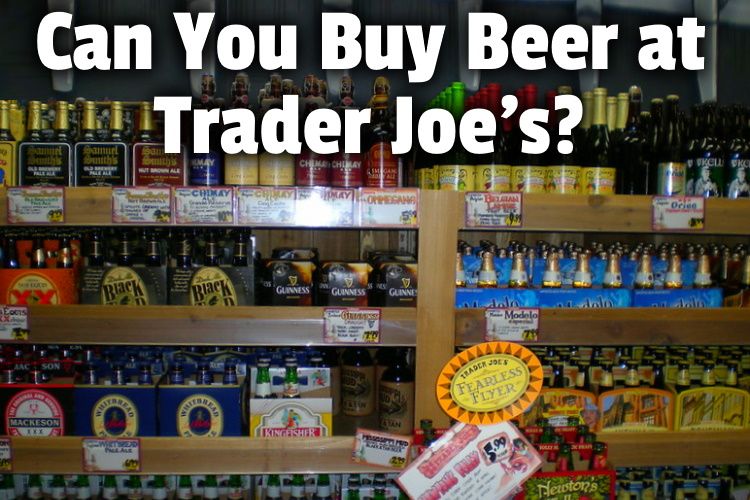 Trader Joe’s sells a lot of good stuff at low prices. But a lot of it is their house brand. So, can you buy beer at Trader Joe’s?

Here’s what I know:

Trader Joe does sell beer in states where alcohol sales are allowed. The store has a wide selection of beers in different styles at low prices. While some are its own house brands, others are regular beer brands.

Trader Joe’s wine & beer section appears to have been relabeled in accordance with COVID-19 protocol … pic.twitter.com/rEZKDR4kax

Does Trader Joe’s make their own beer?

Trader Joe’s does not make its own beer as it does not own a brewery. Trader Joe’s brand beers are made by a few breweries across North America. Those breweries are named on the labels affixed to the bottles and include such well-known names as Gordon Biersch Brewing Company.

Let’s look at a few of the beers and the real brewers.

The Boatswain series, such as Name Tag, Simpler Times Lager, Chocolate Stout, and the Rhinelander Brewing company beers, are made by Minhas Craft Brewery, Monroe, Wisconsin.

The Josephsbrau range of Bavarian and Czech-style beers is made by Gordon Biersch Brewing Company in San Jose, California.

In a recent article of mine, I shared the scoop on whether the store only sells its own house brand and whether its brand of tequila is good. But I also revealed whether you could buy Casamigos tequila (George Clooney’s company) at Trader Joe’s.

Why drink water when beer is cheaper at Trader Joe’s? #OnlyTheEssentials pic.twitter.com/PRKUlpeqQc

How much is beer at Trader Joe’s?

The average price for a 6-pack of beer at Trader Joe’s is $5.49. However, the price does vary from state to state and depends on the type of beer. But it will generally be at least 20% lower than average grocery store prices.

To offer a more accurate picture, we’ll look at a few of these beers and their prices (as of the time of writing). By the way, “ABV” is a measure of the volume of alcohol in a brew. It’s alcohol by volume.

It’s got an ABV of 6.2%, and the quality is decent, but it’s definitely not what you’d like if you want a beer that’s exceptionally refined and hence of great quality. It’s great for occasions where you’re just chilling with some close friends.

Probably not what you want to offer if you have guests you’re trying to please. It’s not bad. It’s simply decent.

It’s got a higher alcohol content than Simpler Times Lager, and being double IPA, lots of hops.

Its taste and aroma are highly pleasant, and it’s indeed top-notch.

Its ABV is very reasonable (the average ABV for beer is 5%), and the price is very affordable. It’s one of the beers I’d recommend without any misgiving. Its ABV is 5.3%, and it sells for $1 per bottle.

Trader Joe’s does sell Guinness Stout. The quintessential Irish drink has been sold in the United States for about two hundred years. Naturally, it can be found in most stores and is available at Trader Joe’s.

Guinness is one of the oldest beer brands in the world.

It’s arguably the most famous beer brand globally, and it’s consumed heavily in different cultures. It has a distinct bittersweet flavor and a head that adds an extra layer of caramel and chocolatey magic to the mix.

Back in Ireland, clovers are often stamped into the head of each pint.

At TJ, you get it to buy in cans. Does it taste as good as the classic stout that’s usually sold in bottles?

There’s a method that’s employed that ensures that the taste and the head are retained even when you’re buying it in a can. But seeing as Guinness is an upscale beer, aficionados suggest that it’s ideal to drink it in a tall glass.

Have you ever wondered whether Trader Joe’s sells tobacco products?

Does Trader Joe’s have cheap beer?

Trader Joe’s has cheap beer at an average retail of $5.49 per 6-pack. On average, Trader Joe’s beer prices are a dollar or two cheaper than what you get in other stores.

Trader Joe is famous for its affordable wine selection. But it’s got a relatively large variety of beer too. They sell for a buck or two per bottle.

Most of the beers are decent, going by tests conducted by a couple of independent informal tasters. There are a few that boast a rich flavor and aroma and a few that are downright of questionable quality. I guess it’s true that you get what you pay for.

The following is a list of some of the beers they offer:

Trader Joe’s sells regular brand beer brands at affordable prices in addition to its own private label brands. However, they tend to not sell standard American beers such as Coors, Miller, or Budweiser.

So some notable and beloved (but let’s be honest, terrible) national brands are missing from its selection.

Luckily, you will find Guinness, Ommegang, and Ayinger, and some other interesting brews. So, even though TJ’s is a “haven for booze”, if you’re a beer lover, you’ll have to make do with its own house brands. Because they constitute the majority of the beer you’ll find in the famed store.

You’ve probably wondered why Trader Joe’s wines are so cheap.

I got into that in a recent article of mine. I explained where they get their wine, whether they still sell “two buck chuck”, whether you can get wine by the case, and I shared what I believe is their best wine.

In the article, we explored whether Trader Joe’s makes their own beer and how much beer is at the store.

But we also found out whether Trader Joe’s sells Guinness. Then, we found out if they have cheap beer. Lastly, we looked at whether they sell regular brand beers.

Beer aisle Trader Joes Reston VA by ShashiBellamkonda is licensed under CC2.0 and was cropped, edited, and had a text overlay added.

link to Why is Trader Joe's Wine So Cheap?

Wine is arguably one of the most refined and highbrow alcoholic drinks. Little wonder, it's also the most expensive. Trader Joe's is known for great prices though, especially on wine. But even aside...