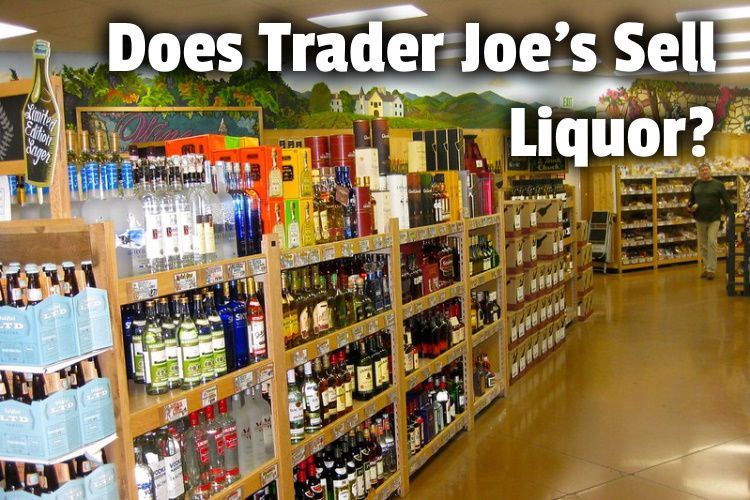 Where and when you can get liquor to buy from a grocery store can be a tad confusing as it varies so much from state to state. But since Trader Joe’s is known to sell a lot of good stuff at low prices, you might be wondering, “Does Trader Joe’s sell liquor?”

Here’s what I know from shopping there:

Trader Joe’s does sell liquor in every state they operate in which allows grocery stores to sell liquor. Those states include California, Colorado, Illinois, and Massachusetts, and many others, with some states having additional restrictions.

Below, I’ll cover every state and all the limits and restrictions per state. And I’ll even review some of the details specifically about what brands Trader Joe’s carries in the states that allow it.

Kris was very patient with me while in Trader Joe’s scoping out the wine section for what probably felt like an eternity 😅 pic.twitter.com/Bdf08fTV5i

What states allow liquor to be sold in Trader Joe’s?

In the below table, you’ll find states and the opening times where you can get liquor in grocery stores. States that allow liquor are in bold.

Is alcohol cheaper at Trader Joe’s?

Trader Joe’s does have lower prices on beer and wine, and liquor where available compared to most alcoholic beverage stores in the same areas. And their private label alcohol is significantly cheaper.

A bottle of that might be $20 elsewhere can typically be found at Trader Joe’s for $15. So, you might be wondering why they are cheap.

So how cheap? It’s very cheap when you consider that a bottle of one of its most popular wines, Charles Shaw, goes for less than $3! It practically goes for a song. It’s available as Cabernet Sauvignon, Merlot, and Chardonnay, in red and white varieties.

It’s so popular, more than a billion bottles have been sold.

It’s being made for TJ, under a contract, by Bronco Wine. Bronco Wine employs a variety of strategies to keep its overhead very low. This is why TJ gets to sell the wine at such rates. What of Vodka? Vodka at Costco goes for $12.99, while Gin at TJ sells for $11.99.

But I used to regularly buy my tequila, bourbon, and vodka at TJs when I lived in California.

And, for example, I used to buy Puerto Vallarta Tequila Blanco in a 750ml bottle for under 15 bucks. These days (and admittedly I left California in 2004) that same bottle sells elsewhere for $28.

These days, they mostly sell their private label tequila, but the prices will almost always be better on all alcohol at TJ’s.

Can you buy these goodies at any Trader Joe’s store, no matter where you live?

Actually, it depends. You’ll only be able to buy them in states that allow grocery stores to sell liquor. Not to worry, in a recent article of mine, I gave a complete guide, state by state.

Before Trader Joe’s became one of the most loved grocery chains, it was just a simple liquor store. “Trader Joe’s was first a liquor shop, before anything else” — Joe Coulombe #traderjoe pic.twitter.com/2J9NiyNtCM

What kinds of liquor does Trader Joe’s sell?

Trader Joe’s sells vodka, tequila, bourbon, whiskey, rum, and most other common types of liquor. In many, but not all cases, the products sold will be labeled under the Trader Joe’s private label, but as with their other house-brand items, will be from reputable manufacturers.

This tequila is made at the Destiladora Gonzalez Gonzalez, NOM 1143 who also make the brands El Mayor and Exotico. The TJs tequila actually scored a 92 in a recent competition and received a gold medal.

So they really do have great liquor at great prices.

They, of course, also have a full complement of other types of liquor, and the rumor is that aside from their Texas vodka, Absolut makes their other vodkas. But again, that’s just a rumor.

Does Trader Joe’s give a case discount on liquor?

These are of high quality because they’re actually being manufactured by some of the best manufacturers of brand-name products. The store is not really the best place for bulk purchases (that’ll be Costco). But, as it is, its liquor prices are a steal.

Before I wrap up, I thought it’s nice I share some interesting facts about TJ and ShopRite.

Now, TJ is one of America’s favorite grocery stores, but there are those who love ShopRite with a passion. So, I took the time to research and explore both in a recent article of mine.

In the article, I looked at their prices, who has more organic products, whether you can order online from both stores, the best things to buy at TJ, and if it has better meat than ShopRite.

In the preceding paragraphs, I looked at the states where you could get liquor at TJ.

But we also looked at whether the liquor is cheap, the types of liquor on offer, and whether you could get case discounts. The liquor goes for a song.

Understandably, there are no case discounts.

But with liquor, some people also want to buy smokes. Does Trader Joes sell tobacco products in its stores?

The answer I give in a recent article might surprise you. That’s especially considering that the brothers who started Trader Joe’s and Aldi had a huge falling out over selling cigarettes.

Hard Liquor in Trader Joe’s? by Bjorn is licensed under CC2.0

After the end of prohibition in 1933, states were allowed to regulate alcohol sales themselves. But it resulted in a wide variety of laws from state to state. So many have wondered what states allow...