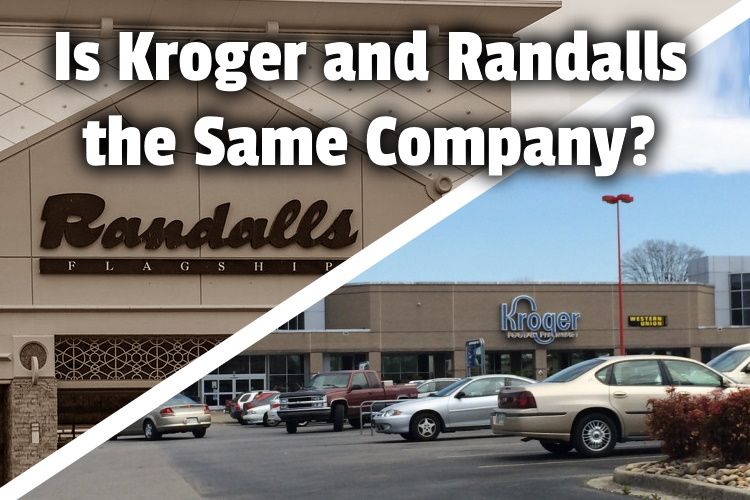 Randall’s grocery chain was once a small family-owned chain in Houston and has been sold a few times. Kroger, on the other hand, has purchased many different grocery chains. So I wondered, is Kroger and Randalls the same company?

Randalls and Kroger are not the same company, nor are they owned by the same parent company. Randalls is owned by Albertsons, while Kroger is privately owned. However, it was rumored in 2013 that Kroger was planning on buying Randalls.

But that deal, which was being pushed by Randalls, then parent company Safeway, fell through. In 2015, Safeway was acquired by Albertsons, who inherited Randalls in the purchase.

So they aren’t related whatsoever.

By comparison, Albertsons is struggling and closing several locations.

So today, we’ll explore more about each company, ownership changes over the years, buyout rumors, and much more.

Who is Randalls owned by?

Randalls Food Market (operates as Randalls and Tom Thumb) is currently owned by Albertsons. It merged with Safeway in 2015. And Albertsons is owned by Cerberus Capital Management.

To understand how and why Randalls is currently owned by Albertsons, let’s explore a bit of its evolution.

Robert Randall Onstead and two partners founded Randalls in Houston, Texas, in 1966. You could say that he knew the grocery sector like the back of his hand. Why? He started working in the industry as a teenager by delivering groceries for his uncle. Later on, he studied for a pre-medical degree.

By the time he was in his early twenties, he was already working for his father-in-law. He was managing a grocery store.

Six years later, he became the president of that grocery business.

And four years later, the business was doing so well; it was sold to Piggy Wiggly. Then, in 1966, he teamed up with two partners (both industry veterans), raised capital, and bought two stores in Houston.

Is it owned by Mormons? I revealed the answer in a recent article of mine. The rumor of somehow being owned by the Church of Latter-Day Saints has been around a long time. And I reveal the origins of that rumor.

Thank you to everyone who has been a part of #tacklinghunger this week!🥫
To be a part of this incredible cause simply just grab a bag of groceries at your local Kroger, H-E-B, or Randalls or make a donation to benefit local area hunger-relief charities.@souperbowl @kroger pic.twitter.com/6pHMy786JG

What companies are owned by Kroger?

Kroger is one of America’s oldest and biggest retail stores. It was established in Ohio in 1883. In terms of revenue, it’s America’s largest store.

It operates retail stores under the following banners:

Let’s check out what the formats entail.

They are planned as “neighborhood stores” in terms of size, travel time, and shopping experience.

They are large enough and contain specialty stores with a wide selection of products that customers desire. The typical specialty departments include organic produce, fresh seafood, pet centers, and whole health sections.

Fred Meyer is a classic example of one of its stores with multiple department stores.

In other words, it’s a supercenter whose aim is to offer a one-stop shopping experience. One of its competitive advantages is a focus on national brands and affordable private label products.

Did you know that most of the stores folks refer to as grocery stores are actually supermarkets?

Yeah. So, what’s the difference between the two? That’s what I explored in a recent article of mine. People use those terms interchangeably, but there actually IS a difference.

Are all Randalls closing?

Some affected employees are absorbed in other stores.

The closures have been an ongoing process for years now. The store has introduced online ordering and curbside pickup, but some of its stores are really struggling. The competitive environment is highly challenging for them.

The closures are based on the analysis performed by the company.

It’s adopted a more rigorous management system since Kohlberg Kravis Roberts acquired a considerable chunk of its shares. This is probably heightened because its parent company is owned by Cerberus Capital Management, a private equity firm specializing in distress investing.

What the company’s spokesperson, Christy Lara, said sheds light on the closures.

“In such a competitive environment, our company must sometimes make tough decisions to close underperforming stores so that we can reinvest in our remaining stores in the marketplace…We invite customers to shop at our remaining Randalls locations throughout the Houston and surrounding area, several of which were remodeled in 2019.”

Randalls is a good example of a regional grocery store. Does it not make more sense to be a national brand?

Why are some grocery stores regional?

I explored the theme in a recent article of mine. What surprised me was how much money one chain makes compared to most, and they only have stores in 1 state!

It’s official! We are now a vendor of the Safeway Corp. Welcome to Tom Thumb & Randalls Grocery Stores.. pic.twitter.com/vf3Hk9IToC

How many times has Randalls been sold?

Randalls has been sold twice. Safeway bought it in 1999 for $1.43 billion. Safeway itself was later acquired by Albertsons (which is owned by Cerberus Capital Management).

Safeway is one of the largest food and drug stores in America.

The Randalls name was retained in some stores, and Safeway’s private label products were introduced. Two years after it was sold to Safeway, Randalls had 12 stores in Austin, 46 in Houston, and 69 in Dallas/Ft. Worth (as Tom Thumb and Simon David).

Four years later, it was rumored that Safeway wanted to sell it, but what actually happened was that stores were closed.

And that’s continued. 15 stores were closed. Safeway explained that the closures were because it wanted to revitalize the Texas division and implement a new format.

The changes were not enough to help Randalls. It has been losing market share.

The rumor of Kroger purchasing Randalls circulated in 2013-2014. However, no sale was ever executed, and Kroger declined to comment on the rumor.

The rumor didn’t refer specifically to Randalls but its parent company, Safeway.

Safeway is Kroger’s rival and, at a point, was contemplating putting itself up for sale. And the rumor had it that Kroger might be interested.

A spokesperson for Kroger, however, responded that the company doesn’t comment on rumors.

It could be because Kroger had bought Harris Teeter supermarket for $2.5 billion. An analyst commenting on the issue thought that Kroger would not be interested in seeing as Safeway’s performance was unimpressive.

Kroger and Walmart are both giants in the retail sector.

But which one is better? In a recent article, I explained (amongst other things) that while it’s true that you’ll get products at relatively low prices at Walmart, the quality is often not the major criterion the chain looks at in selecting products.

We looked at who owns Randalls and if it’s the same as Kroger.

But we also explored a bit about its evolution, how many times it’s been sold, the companies owned by Kroger, and the overall history of both companies to see where, if at all, they intersect.

Randalls Flagship Supermarket Grocery Store in Houston, Texas by Tony Webster and Kroger Maryville, TN by Mike Kalasnik are licensed under CC2.0 and were cropped, edited, color adjusted, merged with a graphic and text overlay added.

link to Is Albertsons owned by the Mormon Church?

Knowing who owns a grocery store sometimes affects our choices of whether to shop there or not. Albertsons is one of the famous options for grocery shopping, and you might be wondering, is Albertsons...

Continue Reading
link to Kroger vs. Walmart: Which Is Better?

Kroger is the second-largest grocery store in the US after Walmart. But many Kroger shoppers wonder if it's really worth paying more money for groceries than if they shopped at Walmart. So today,...