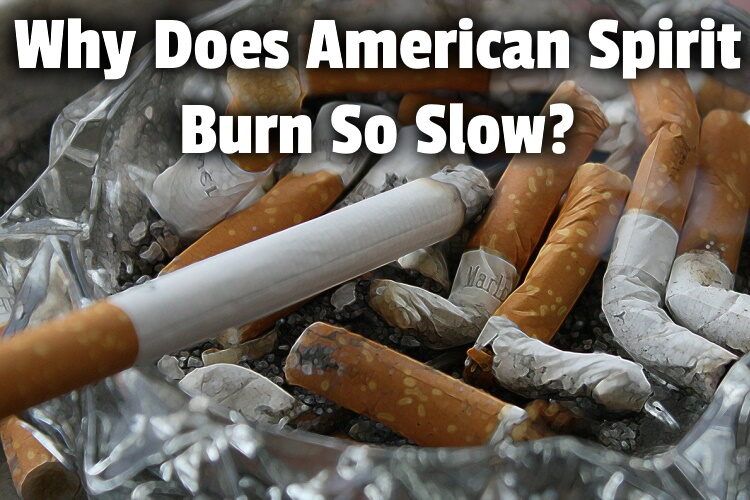 A lot of cigarettes burn fast. After a few puffs, they seem to have vanished. American Spirit does not belong to this category, and you’ve probably wondered, why does American Spirit burn so slow?

American Spirit burn slower because they are additive-free. Some additives added to mainstream brands serve to make cigarettes burn faster. It stands to reason that since American Spirit lacks these additives and because it’s well-packed with natural tobacco, it burns at a much slower rate.

In this article, we’ll find out if tobacco additives make them burn faster and what makes American Spirit different. We will find out if they contain additives and whether slow-burning cigarettes are bad for you.

smoking a broken cigarette u have to hold together feels the exact same as smoking an american spirit pic.twitter.com/0cenOLhiYM

Yes. Additives added to tobacco make it burn faster. However, that is not the sole function of additives in cigarettes.

They are also used to improve the manufacturing process to minimize cost, create product distinctions that are then used in marketing, and meet regulatory demands.

Three potassium salts (saltpeter), malate, tartrate, and citrate are additives sprayed onto flue-cured blend tobacco to increase the burn rate and ensure an even burn.

A lot of people believe that fast-burning cigarettes are a sneaky way on the part of cig manufacturers to make more money as they are likely to make people smoke a lot more.

Additives also ensure that the cig stays lit when discarded or forgotten until the smoke is extinguished when it gets to the filter. Cigarettes with additives could especially be dangerous if one forgets or fails to discard them properly.

Perhaps you had to dash into another room or make a call outside. Smoking, according to a report by NFPA, is the leading cause of home fire deaths.

This is one of the reasons a lot of people prefer additive-free brands such as American Spirit. Slow-burning cigs usually self-extinguish when they are not being puffed. So, the risk of fire is extremely lower.

Now, can you order cigarettes through DoorDash?

American Spirit cigarettes are different because they are additive-free and some versions of their products are made with organically-grown tobacco. As such, fewer pesticides are used by the company, and there is lower deforestation which is often associated with growing tobacco.

Additives are used to make smoking a more pleasurable experience because they help mask the harshness of tobacco and aid the delivery of nicotine.

One of the additives that are used in many cigarettes is saltpeter. Its purpose is to make the cig burn faster! A sneaky way to make you buy and smoke more.

Another vital difference is that American Spirit does not use “sheet tobacco”.

These are the residues of stale cigarettes that have been returned by retailers, which, as you can imagine, would impact the flavor adversely. American Spirits have a rich flavor and, because they burn longer, offer greater value for money.

You also have an array of choices depending on your preferences. There are 8 different types, with slightly varying compositions of Nicotine, Tar, and CO. The below list shows the types available:

Can you order American Spirits through Instacart?

I explained why Instacart does not deliver tobacco products, and I even revealed if it’s legal to deliver cigarettes.

american spirit cigarettes but instead of the native it’s an office worker smoking during his break … pic.twitter.com/kZgUrjk7Co

Do American Spirit cigarettes not have additives?

Yes. American Spirit cigarettes do not have additives in them. They are owned by R.J. Reynolds, one of the companies that developed the additive-free approach to manufacturing cigarettes.

It stands to reason that they are manufactured more naturally.

In addition to the above, American Spirit cigarettes have been mentioned in some scholarly studies, and their additive-free nature is always taken for granted. If it were not, these studies would have highlighted it.

The FDA has also not contested the additive-free nature of the brand. What it had issues with is that marketing the brand as “natural and additive-free” might suggest that they are a healthier choice.

As they are additive-free, are they vegan?

To learn more, check out a recent article of mine. In it, I looked at whether American Spirit is tested on animals and whether it’s kosher for vegans to smoke cigarettes.

I looked at examples of cigarette brands that are vegan and which cigarette companies do not test on animals. And I revealed whether American Spirit’s filter contains pig’s blood!

Doing a giveaway, retweet for the chance to win a carton of natural American spirit cigarettes signed by me pic.twitter.com/F5YNqjFgHa

What additives are in American Spirit cigarettes?

There are no additives in American Spirit cigarettes. It is made of tobacco and water as advertised. And there is no “sheet tobacco” used in making it. It is made mainly from natural, organically grown tobacco.

That said, American Spirit cigarettes are no healthier than other cigarettes even though they have no additives. Why is this the case? It’s because tobacco itself is not the healthiest of plants, to put it mildly.

All cigarettes are harmful because of two main factors: the harmful chemicals that are released during combustion (when smoke is released) and from the tobacco plant itself.

Tobacco naturally contains carcinogenic properties. So, even in its natural form, it can be harmful. These carcinogenic metals are absorbed into the tobacco through the soil!

the hunter version of american spirit cigarettes being the color of his civvies so true pic.twitter.com/LzoF7RwdKo

Is a slow burning cigarette bad for you?

The rate at which a cigarette burns has little to no bearing on the impact on the health of the smoker. Ultimately what is most harmful about cigarettes is the nicotine and tar, and those are still present in American Spirit cigarettes and are not impacted by the speed at which their cigarettes burn.

But there is benefit to not having all the additives typically added to more mainstream cigarettes.

Most smokers have a rhythm at which they smoke — how often they take a puff, inhale, and then exhale. This would hardly vary irrespective of the rate at which cigarette burns.

A slow-burning cigarette is probably more pleasurable, as you can take your time.

There is no need to hurry. But because it’s well-packed and free of additives, it is bad for you, as it may contain more tobacco than the regular cig, and that means that you’re likely ingesting more nicotine.

Now, have you ever wondered if you can get tobacco products from Trader Joe’s?

This is what I explored in a recent article I published. I get into whether Trader Joe’s and Aldi split because of an argument over selling cigarettes and whether Aldi grocery store sells cigarettes.

I explained why Trader Joe’s doesn’t sell cigarettes and if any retailer sells house-brand cigarettes. And I revealed discount grocers that sell tobacco products.

In the article, we found out if tobacco additives make them burn faster and what makes American Spirit different.

We learned that additives have many purposes in cigarettes. Some make cigs less harsh to inhale, some help with nicotine delivery, and there are those that actually make the cig burn faster.

We also found out if they contain additives. American Spirits do not contain additives. But that’s not to suggest that they are necessarily healthier than the next cig. Lastly, we wrapped things up by considering whether slow-burning cigarettes are bad for you.

Image by Gerd Altmann from Pixabay

link to Can You Buy Cigarettes Cheaper Online Than at a Grocery Store?