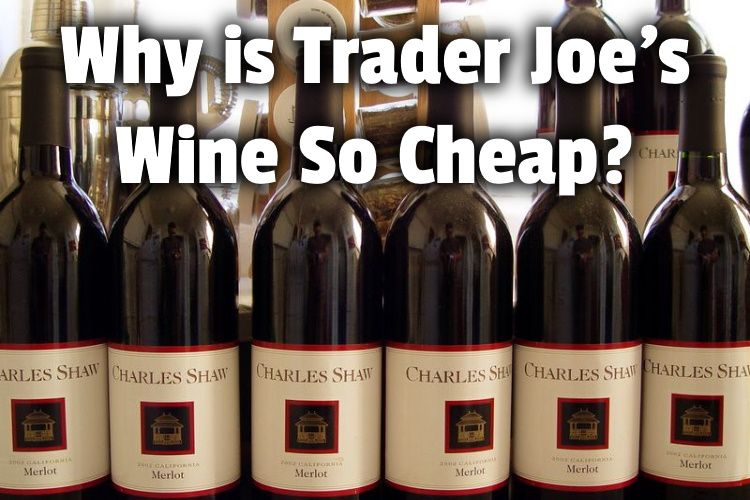 Wine is arguably one of the most refined and highbrow alcoholic drinks. Little wonder, it’s also the most expensive. Trader Joe’s is known for great prices though, especially on wine. But even aside from “Two-Buck Chuck”, why is Trader Joe’s wine so cheap?

Most Trader Joe’s wine is made under a private label arrangement. This gives Trader Joe’s the exclusive on many of its labels, making it hard to compare prices directly. But buying large quantities and focusing on less expensive wineries all help keep prices low.

Many of Trader Joe’s wines are made by Bronco wine in California.

Now, Bronco wine, a family-owned company, is not one of those snobbish vintners, even though they are one of the best at what they do. They focus on selling good wine at affordable prices, and they own over 120 brands in 90 countries.

We’ll also find out if Trader Joe’s still sells Two Buck Chuck and whether they sell discount wine by the case.

What is the cheapest wine at Trader Joe’s?

The Charles Shaw blend is the cheapest wine at Trader Joe’s. This most popular brand, known as “Two-Buck Chuck”, sells for $1.99 at some stores and not more than $3.79 at other stores.

The Charles Shaw blend is the cheapest and also one of the most popular brands in America. Over a billion bottles have been sold since sales started in 2002. It’s its most iconic brand.

Charles Shaw has its critics, but it is beloved by a lot of people. This is confirmed by the fact that over a billion bottles have been sold since 2002. Some stores sell over 6 thousand bottles each day! Some critics have dubbed it “the darling of the discount wine world.”

By the way, the Charles Shaw name is not fictional. It’s the name of the owner of the winery that Bronco wine bought, which was the place where the drink was originally being produced.

The brand has sold 1B+ bottles and does $500m a yr. He bought the winery from Charles Shaw (a Stanford grad) for $27k.

“We buy wineries from guys from Stanford who go bankrupt,” he said. “Some real dumb-asses from there.” 😂 pic.twitter.com/dYXLH4ykLm

Where does Trader Joe’s get their wine?

Much of Trader Joe’s wine is made under a private label arrangement by Bronco wine. It is one of the largest wine producers in the United States and is located in Ceres, California, which is near Modesto, just south of Sacramento.

It is the company that transformed wine into something that’s not just for the rich. It made wine affordable by using innovative practices.

The owners, John, Joseph, and Fred Franzia, are shrewd businessmen from a family of winemakers.

But they weren’t in love with the snobbery that’s common among traditional wine producers and lovers. They read the market incredibly well and knew that folks wanted to drink wine but were not ready to pay the high prices.

They used a series of smart business strategies such as buying up distressed wineries and putting in place a factory that could produce twice the capacity of all the winemakers in Napa Valley.

At one point, their factory was working non-stop 24/7 to produce Charles Shaw. A year after sales started, it’s already sold 60 million bottles! According to the hustle.co, the following are some of the secrets behind Bronco’s success with Charles Shaw:

Lets see how Destiny can screw me on pinnacles today! Maybe Gambit. Featured beverage is the Gambler’s Flash Red Table Wine from #TraderJoes. Check us out on YouTube! !beverage !merch !youtube pic.twitter.com/jNUsiXSoMb

Gambler’s Flash Red Table Wine is the best Trader Joe’s wine available now. Like most of the wine sold by the grocer, it’s a private label product. It combines great quality with affordability. It retails for $7, and its ABV is 13.9%

It’s a proprietary blend. So, the grapes used are not disclosed. Regardless, the taste is an exquisite blend of a touch of cinnamon, cherry, vanilla, blackberries, dried sage, and coffee beans, to name a few.

It’s smooth as it glides down the throat and has a slight bittersweet and acidic aftertaste. Its richness is difficult to capture in words. It’s the taste buds that can truly appreciate this quality wine.

That being said, I prefer one of the 2 Barolos they sometimes have, if the budget is a little higher. One is around 15 bucks, and the other under $30. Barolos often go for $50-100, so this is pretty exceptional for the price.

Yes, it does in some states and not in others. And, even in some of the states where it sells, there could be restrictions. In a recent article of mine, I shared a complete state-by-state guide. Check it out for details.

Just stoppered my two buck Chuck merlot with a paper towel because I broke the cork. I am the definition of elegance pic.twitter.com/1YFZ780d3D

Trader Joe’s is still selling Two Buck Chuck. At one point, its price rose, and it was selling for $2.99 and not $1.99, the iconic price that gave it its name. However, Bronco, its manufacturer, has implemented certain strategies that have enabled them to return it to its former price of $1.99.

It was retailed for 11 years at this price, and Bronco was selling 5 million cases a year.

The president of marketing and product at Trader Joe’s explained how they’ve been able to sell at the old price:

These cost savings have put us into a position where we can pass a lot of that savings right onto customers.”

Of course, as it occurs with most products, the price would most probably increase.

Is Sprouts better than Trader Joe’s?

In a recent article of mine, I showed that Sprouts is not better than Trader Joe’s, but they have full-service meat and seafood and bakery departments. TJ is cheaper and unlike Sprouts, does not carry products with artificial ingredients.

Does Trader Joe’s discount wine by the case?

Trader Joe’s does not offer case discounts on wine. The reason is that Trader Joe’s feels they already offer their absolute lowest prices all year and cannot afford to offer additional discounts.

Its products are mainly private label brands of high quality because they’re being manufactured by some of the best manufacturers of brand name products.

Trader Joe’s is not the ideal store for bulk purchases (that’ll be Costco or Sam’s Club or some other warehouse). But, as it is, its wine prices are a steal.

Before I wrap up, I thought it’s nice I share some interesting facts about Trader Joe’s and ShopRite. Now, Trader Joe’s is one of America’s fave grocery stores, but some love Shoprite with a passion.

So, I took the time to research and explored both in a recent article of mine.

In the article, I looked at their prices, who has more organic products, whether you can order online from both stores, the best things to buy at TJ, and if it has better meat than ShopRite.

Amongst other themes I explored, I showed that Trader Joe’s is one of the least expensive grocery stores in the nation. It’s 6 percentage points below Shoprite in terms of pricing.

And, it has a more considerable selection of produce. But, Shoprite comes out on top when one checks out the meat section of both stores. I also offered advice on the best things to buy at Trader Joe’s, including beer and wine.

We also found out whether Two Buck Chuck is still being sold, and we wrapped up by considering if they discount wine in cases. They don’t because their prices are already heavily discounted.

A Whole Lotta Two Buck Chuck by Kris is licensed under CC2.0 and was cropped with a text overlay added