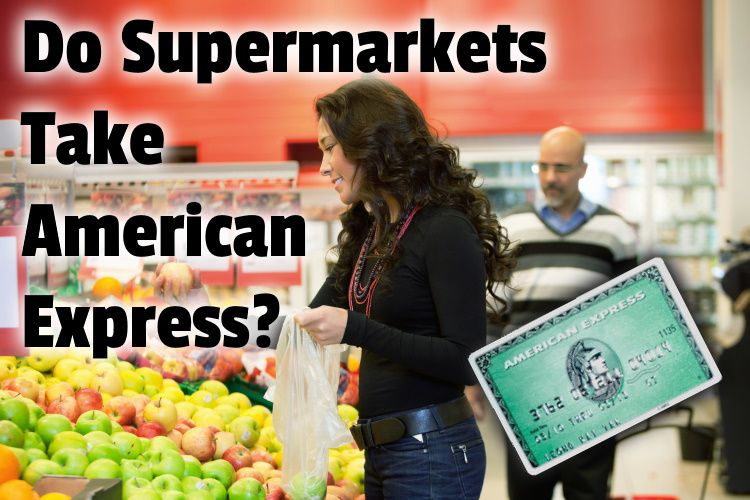 Almost all transactions nowadays are done by card instead of cash, and many people use cards like American Express for the perks. But, since many stores don’t take Amex, many often wonder do supermarkets take American Express?

Here’s what I can tell you from my experience:

Most supermarkets take American Express as one of several payment options, but a few do not, such as Costco. They, like all merchants who do not accept Amex, made their decision due to the significantly higher fees they charge the merchant for accepting it.

Before becoming a consultant, I worked as a general manager for 20+ years at Whole Food, and while they do take Amex now, I remember a time when Whole Foods did not.

In this article, I explained why AMEX’s acceptance rate was slow and why it’s been increasing faster more recently. But we’ll also explore their merchant fees and compare them to Visa and Mastercard, and talk about why they are higher.

We’re kicking off 2021 w/ new offers to support how lives & businesses have changed whether that’s spending time at home or getting back to business. From online shopping & local travel to key tools for small businesses, learn more: https://t.co/FmAu4q9Rdn Terms Apply. pic.twitter.com/T0rhayyW40

All major grocery chains, except Costco, do accept Amex. About 1% of all grocery stores choose not to accept American Express.

These stores do not accept it because it’s more expensive for them.

They are charged higher fees by American Express relative to other cards. In other words, they’ll make more money by accepting other cards.

The way most credit cards work is either genius or heinous depending on your perspective.

They charge interest to the customer who keeps a rolling balance. That interest rate varies but for some people is over 20%. Then they also charge the store that received the payment a rate of around 1.5% (of whatever the total purchase was).

American Express is different in that customers are supposed to pay the card off in full each month.

So theoretically, Amex doesn’t make any money on interest. Therefore, they have to charge the merchants more to make up for that loss.

So since its inception, there have been a lot of stores that refused to take American Express compared to Mastercard and Visa.

As a response to the relatively low acceptance rates in the past, the fees were reduced by a few points. They also struck a partnership with Visa and Mastercard to increase the acceptance rate. So many more stores are now accepting it.

In addition to the fact that the fees are high, AMEX holders are usually affluent folks who may not be shopping at small stores. This is another reason the stores may not be accepting the cards.

They know the demographic they cater to.

Amex cards are typically held by wealthier individuals. So Amex doesn’t card if places like Dollar General accept their card or not (they do).

So, it’s essentially a business consideration and not a commentary on the card.

Well Amex is happy to UPS-overnight any number of cards. The UPS Driver must think I’m a fancy guy! pic.twitter.com/2bvUY4roz8

What qualifies as a supermarket for American Express?

American Express’s definition of “supermarket” is a store that offers a wide variety of food and household products, but they specifically exclude superstores, convenience stores, and warehouse clubs.

The following are examples of supermarkets where American Express is accepted. Naturally, you’ll qualify for additional rewards when you use AmEx cards in these stores.

My AMEX PLATINUM card just came in the mail today !! 😍😍

Why is AMEX not accepted in some grocery stores?

Some merchants do not accept American Express due to the significantly higher fees they charge the merchant for accepting it. Amex charges merchants a rate from 2.3% to 3.5% of the total purchase price compared to 1.5% to 2.5% for Visa and Mastercard.

Amex is arguably the most prestigious card in the world.

It has millions of customers in America and in other parts of the world. So, it’s surprising that it’s not accepted in some places. Why? The answer is simple: It’s more expensive.

It’s usually small businesses that do not accept it.

The fees are too high for them, and a lot of their customers do not belong to the demographic that most AMEX holders belong to (affluent). So, it may not be worthwhile.

When credit card issuers, such as American Express, Visa, Mastercard, and Discover, process payments for merchants, they charge them a fee known as “interchange fee.”

It turns out that the fees charged by American Express are the highest (relative to similar cards).

Since these merchants have relatively cheaper options, it makes sense that they’ll prefer those and reject AMEX, right? Let’s learn a bit about the “interchange fee” and what AMEX charges compared to other major cards.

It’s made of a percentage and some fixed transaction fee.

The rates vary depending on the nature of the purchases made. AMEX discount rates range from 2.3% to 3.5% compared to 1.5% to 2.5% for Visa and Mastercard.

At first glance, the differences in the rates may not seem significant, but when multiplied by a thousand or a million transactions, it’s easy to see that they can add up and become something substantial.

They may reduce a small business’s bottom line considerably!

By the way, Visa and Mastercard account for most of the cards in circulation. In effect, they are the most widely accepted, trailing behind them is Discover, while AMEX is the fourth.

Both Kroger and Walmart accept the American Express card, in addition to all other major credit cards.

Despite its relatively higher fees, you may wonder why many stores still accept AMEX.

As you’ll recall, 99% of stores that accept credit cards now accept AMEX! I’ve actually hinted at the reason earlier: Most AMEX cardholders are affluent folks who are not price-sensitive and who tend to spend more.

So, it’s conceivable that stores that accept the card know that they’ll earn more money from the cardholders, which offsets the high fees. It’s a good business strategy to offer customers more options when it comes to how they can pay.

Did you know that some stores we regard as grocery stores are actually supermarkets?

Really? Yeah. So what’s the difference? That’s exactly what I explored in a recent article of mine.

Apart from letting you know the difference between both, I also explained the concept of a superstore. It’s an interesting read.

Amazon allows purchases made to the American Express card, including purchases from Whole Foods Market delivered via Amazon Fresh.

The following are all the ways you could pay for your purchases on Amazon:

It’s good to know that affluent folks can easily buy what they want, but you might be wondering what about those who are not well-off?

What about EBT? Are they accepted by all grocery stores?

Unfortunately, no. In a recent article of mine, I explained that grocery stores have to meet certain conditions before the USDA grants approval for them to accept EBT. In fact, there are certain types of food the store must offer before they can qualify.

I outlined the requirements they have to meet. And I also shared a surprising fact why many stores accept them. Just click the link to read it on my site.

To wrap up, it’s good to know that American Express can now be accepted at 99% of places in the US that accept credit cards.

This is based on the February 2020 Nilson Report. The world’s most prestigious card comes with some rewards (as you’ll expect).

In the preceding paragraphs, we explored why AMEX’s rate of acceptance used to be low, why it’s increased dramatically.

But we also looked at why it’s still not accepted in some stores, and we concluded by finding out if it’s accepted by Amazon, Kroger, and Walmart.

credit by Kaiyan is licensed under CC2.0 and the Amex card was cropped from the image and placed on top of another image with a text overlay.