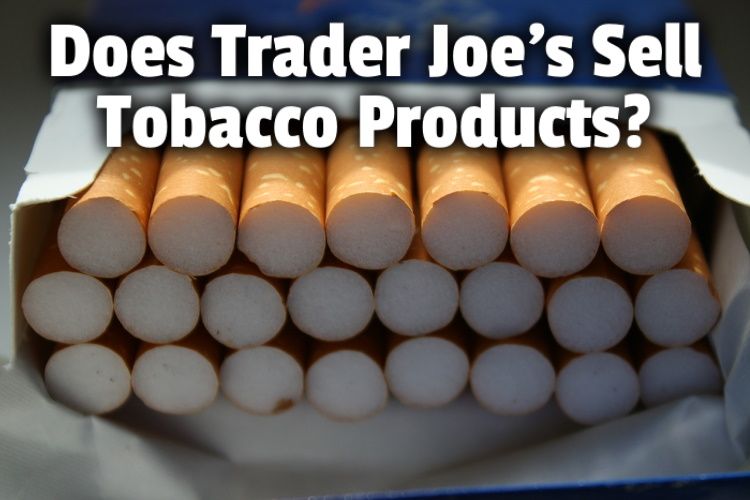 Trader Joe has a cult-like following and is known to have a little bit of everything at very low prices. But does Trader Joe’s sell tobacco products?

Here’s what I found out when I asked:

Trader Joe’s does not sell tobacco products of any kind. It’s a policy of its parent company, Aldi Nord, which split from Aldi’s grocery chain because the original owners had a falling out over the issue of whether to sell or not to sell cigarettes.

There are probably other reasons, too.

How the brand would be perceived and the fact that tobacco products are actually a dying category may have helped reinforce the policy.

In the article, we’ll look more closely at why Trader Joe’s and Aldi split over the sale of cigarettes and whether Aldi sells cigarettes.

But we will also consider why Trader Joe’s doesn’t sell cigarettes and if there are retailers who sell house-brand cigarettes. Finally, we’ll look at some of the grocers who sell tobacco products.

So, keep on reading…

Did Trader Joe’s and Aldi split because of an argument over selling cigarettes?

Trader Joe’s did not split from Aldi as the split happened prior to the creation of Trader Joe’s. But the founding brothers did divide their company because of a disagreement over the sale of cigarettes.

Aldi used to be one company — a German family-owned business known as Albrecht Diskont — that gradually morphed into a chain of small grocery stores that were being managed by the two sons of the owners.

In 1960, they disagreed over whether Aldi should be selling cigarettes.

Both brothers, Karl, and Theo Albrecht agreed to operate in separate geographical locations. The name: Aldi is taken from the first two letters of the word: Albert Discount.

Aldi Nord took over grocery stores in the Northern part of Germany, while Aldi Sud took over those in southern Germany and other parts of Europe.

It would be a little over a decade later that one of the companies acquired Trader Joe’s. Aldi Nord owns Trader Joe’s. It’s been the owner since the 70s, but Trader Joe’s is not an organic part of Aldi.

It is independently operated and was not originally a part of Aldi.

As such, Aldi does not share the same parent company with Trader Joe’s, nor do they have joint ownership. What’s common to both is their heritage.

After all, Aldi Nord created Trader Joe’s about 40 years ago.

That was its entrance into the U.S. market, and they had been operating it since 1979. Trader Joe’s is owned by Aldi Nord, but it is operated independently.

In 1960, unable to reconcile differences in opinion about whether or not to sell cigarettes, the Albrecht brothers split—Aldi Süd, headed by Karl, took over the south of Germany, and Aldi Nord, headed by Theo, operated in the north. https://t.co/AJ21204a5l pic.twitter.com/9wqdQHNMGi

Aldi’s does not sell cigarettes. Aldi’s falls under the company Aldi Süd founded by Karl Albrecht, who was the brother opposed to cigarettes.

Most of the other discount stores sell cigarettes, but Aldi does not, and this is commendable. It’s a prioritization of the customer’s health over and above profit.

How the brand would be perceived is also a key factor.

Many people frown upon cigarette sales. After all, stores are meant to be champions of wholesome products. A lot of people, knowing how dangerous cigarettes are, do not look favorably upon stores that sell cigarettes.

But if you can’t get smokes at Aldo, is it possible to order cigarettes via DoorDash?

In a recent article, I answered questions such as whether Walmart delivers cigarettes with DoorDash, how to order cigarettes from DoorDash, whether you’d be required to show your ID, and whether the cigarettes would be left at your door.

JUST IN: Trader Joe’s has announced a grand opening date for its first-ever store in South Bend.

The new store in Eddy Street Commons will open to for business at 8 a.m. on Aug. 20. pic.twitter.com/lAG5QQznJ1

Aldi Nord, the company that owns Trader Joe’s, chose not to sell cigarettes due to both health concerns and declining sales. Ironically, founder Theo Albrecht was the brother that wanted to sell cigarettes, leading to a split with his brother Karl.

Of course, in 1979, people didn’t view cigarettes the same way they do today.

But a discerning and beloved brand, such as Trader Joe’s, may not want to be associated in any way with a product that the surgeon general says is likely to kill its users!

From a business perspective, the margin on cigarettes is low and may not be worthwhile to the brand.

And the original split between the brothers was due to Karl being concerned about it attracting shoplifting, not health concerns.

And, there’s the added work of complying with the regulation on selling cigarettes which may be seen as an unnecessary hassle.

Because of the harmful nature of the product, it is actually a declining category in the retail business. As such, it’s not really worthwhile. But they do sell alcohol. So they’re not total purists. And in some states, Trade Joe’s sells liquor too.

You’ve probably wondered why Trader Joe’s wines are so cheap.

You have, right? Well, you’re in luck because that’s what I wrote about in a recent article of mine.  I explained where they get their wine, whether they still sell “two buck chuck”, whether you can get wine by the case, and I shared what I believe is their best wine.

Do any retailers sell house-brand cigarettes?

For starters, look at the amount of taxes on a pack of cigarettes. On average, as of this writing, cigarettes in the US have $1.41 per pack just in taxes. And in some states, the total tax is over $3.00 per pack. (source)

So if they can buy cigarettes in bulk for cheap and package it under their name, they can sell them for less.

And in most cases, while perhaps not premium tobacco, they are made by the same companies that sell the name brands.

The prices are always lower than that of the popular brands, so a lot of people also buy house brands.

These brands, because they are cheaper, are usually purchased by price-sensitive customers such as the elderly, the poor, and those who are dependent.

As you can see, many discount stores sell tobacco products.

It’s perfectly legal. The FDA does not prohibit the discounting of tobacco. It simply requires that all the applicable laws and regulations be adhered to.

So, if someone who is very young-looking were to ask to buy a tobacco product, they might be asked to show proof-of-age identification.

Apart from some of the discount stores, can you simply order your cigs and tobacco products through Instacart?

I explored the question and related ones in a recent article of mine.

In it, I also looked at whether you could order cigarettes through DoorDash and UberEATS and whether it’s even legal to deliver cigarettes.

In the article, we looked at whether Trader Joe’s and Aldi split because they fell out over the sale of cigarettes and whether Aldi sells cigarettes.

But we also considered why Trader Joe’s doesn’t sell cigarettes and if there are retailers who sell house-brand cigarettes.

Finally, we looked at some of the grocers who sell tobacco products.

Image by Gerd Altmann from Pixabay

link to Can DoorDash Deliver Cigarettes?

As you probably know, your fave meals can be ordered with DoorDash, and even groceries and liquor. But can DoorDash deliver cigarettes?  Here’s what I found out: DoorDash can deliver...

Continue Reading
link to Does Instacart Deliver Cigarettes? (No, but one service does!)

Online grocery delivery has taken the world by storm. Even in the remotest of locations, a lot of things can be ordered from the comfort of one's home. But what about things like cigarettes? Does...