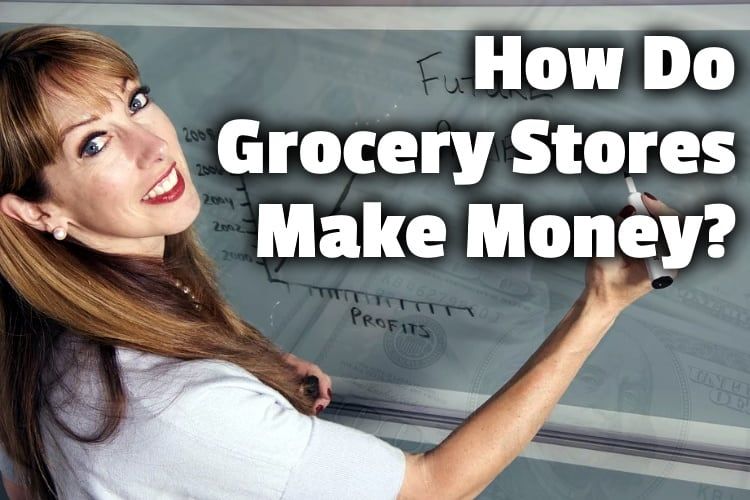 If you’ve ever considered owning a grocery store, work in one, or are just curious, you may have wondered how do grocery stores make money?

After more than 2 decades in that industry, here’s what I know:

As a general rule, grocery stores operate on a profit margin as low as 1-3%. So they make money by selling large quantities. They also try to minimize shrink (theft and spoiled products) and keep labor costs as low as possible, often by hiring more part-time employees (who get fewer benefits).

But there’s a lot more to grocery store profitability than just that. So let’s (as they say in The Princess and the Frog), dig a little deeper.

Grocery store profit margins are very low. Even so, owning a grocery store can be very lucrative.

I’ll answer all of these questions and more. Just keep reading!

How do grocery stores work?

Grocery stores, when staffed with the right people, run like a well-oiled machine.

Grocery stores provide a service. They don’t typically sell a product of their own unless they have a large prepared foods section.

Rather, they buy existing products from distributors for stocking their local stores to sell to customers. (source)

Once those products make it to the local store, it’s up to that store’s manager and team members to provide the services and resources that attract new customers and retain loyal ones.

Grocery store managers are responsible for all aspects of running the store. From supervising employees to maximizing profits.

In turn, if the store doesn’t have a good leader, the whole thing falls apart. So the manager is responsible for not only keeping the team together but the store running smoothly.

Grocery store managers are responsible for hiring and training employees.

They look for employees that can be trained to be the best in their department. And they also communicate with their employees to discuss potential stocking issues, answer questions, and address any staffing needs.

Lastly, they also need to think about what makes a good grocery store.

Good grocery stores have decent parking, even when the store is busy. They also have nice, wide aisles and competitive prices. They have properly staffed checkouts and an atmosphere that makes you want to hang out and shop.

There is so much that goes into running a good grocery store, and how they work.

It really can’t be properly addressed in one section of an article. So I wrote an entire article on how to run a successful grocery store!

To read all about what it takes to run a successful grocery store, read this recent article.

So they can be profitable. But margins are low and there is a lot of competition.

And those conventional chain stores are pretty profitable. But not in terms of a profit margin; just gross dollars.

But as I mentioned stores like Whole Foods Market may actually generate a 5-12% profit.

However, for small independent grocery stores, 1 to 4% is more typical. There are also a lot of factors that affect independent owners more, such as marketing, product costs and shrink.

Because smaller markets sell so much inventory, typically don’t give out free samples, or usually have an in-house butcher, 1-2% profit margin is pretty good.

Think about it this way.

If the average Safeway does $1,000,000 in sales per week, that means $20,000 per week profit, max. That adds up to a little over a million dollars profit per year for that one store.

Smaller mom and pop stores might be closer to 10-12% profit margins, but they likely won’t do as much in sales, which means much lower profit.

There is a lot more to talk about when it comes to the profitability of grocery stores.

To read more, check out this recent article. In there, I go a lot deeper into how to maximize profits for a grocery store, and the one thing that will almost assuredly tank a store’s profit.

What is the most profitable item in a grocery store?

Here are the Top 10 most marked-up items in a grocery store:

But trying to figure out how much to price a product and how much profit you can make when you sell it is tricky.

And this is kind of a tricky question.

The items with the highest retail markup will bring in the most profit per item. But, if you only sell one or two of those items, it won’t be very profitable.

On the other hand, markup can be lower if you are selling large quantities of items, resulting in a higher profit dollars.

The way grocery stores typically make a profit is by selling volume. So selling more of a lower priced item at higher volume will bring in more profit than selling one or two items with a higher markup.

I know the difference between markup and margin is confusing.

To read all about the differences in profit margin and markup, and how to calculate them to make the most profit, just read this recent article.

Click the link on my site to read the article, and hopefully take away some of the confusion.

For this example, I’m going to talk about the single most profitable item with the highest markup.

Alcohol typically has a 25% markup where other items are only 5-10%. (source)

Bottled water is marked up significantly, too. It takes about $1.50 to make 1,000 gallons of water. A single bottle of water may cost anywhere from $1 to $3, making it very a very profitable grocery item. (source)

But most of the profit made by grocery stores comes from volume. Canned goods, produce, lunch meat – the things that people purchase regularly are what’s going to keep money coming in.

How much do grocery stores pay for food?

Grocery stores often operate on a gross margin between 25-35%, meaning that the cost of their goods is often between 65-75% of the price they are charging.

But without looking at their books, there is really no way to know exactly how much grocery stores pay for their inventory.

There’s also a big difference between a Dollar General and Whole Foods Market.

Because grocery store mark up is pretty low, you can rest assured that grocery stores aren’t paying much less than their customers. They also take hits that customers don’t always see.

For example, if a grocery store pays 60 cents for a can of beans and sells it to you for $1.00, they’ve made a gross profit of 40 cents. 40 cents for every can of beans sold, sounds great, right?

Well..that’s not exactly how it works.

Gross profit is the amount of profit a store makes before any expenses have been deducted.

For example, if our can of beans was dented and couldn’t be sold, you’d have to eat that cost, unless the vendor gave you credit for it. Most distributors give stores a flat percentage to cover damage losses rather than allowing them to return every item for full credit.

But grocery store profits are much more complicated than our simple bean example.

To read more about how profitable grocery stores are, read this recent article.

What is the profit margin on grocery stores?

Profit margins, a commonly used term that has to do with describing the profitability of a business. A profit margin represents what percentage of sales a business has turned into profit.

In other words, and to put it even more simply, a profit margin shows how many cents of profit a business makes for each dollar of sales. And that number is typically represented as a percentage.

Conventional grocery stores have a profit margin of about 2.2%, making them one of the least profitable industries in the US.

But they make their money by selling in large volume and multiple locations. However, stores in natural, organic, and gourmet niches tend to see bottom-line profit margins closer to 5-10%.

But there’s a lot more to know about grocery store pricing and profit margins.

To read more about how grocery store profit margins and how they maximize profits in a competitive industry, read this recent article. I even get into some of the display techniques designed to subliminally get you to buy more.

Did I answer everything you wanted to know about how grocery stores make money?

Grocery stores may not have very large profit margins, but they do a pretty good job of making money.

Let’s face it – people have to eat. As such, there will always be a market for supermarkets.

It takes a lot to run a grocery store. From having the right people, to how the store is laid out, and even the general atmosphere.

All of these things are taken into consideration when determining how grocery stores make money.

Are you planning on owning your own grocery store?