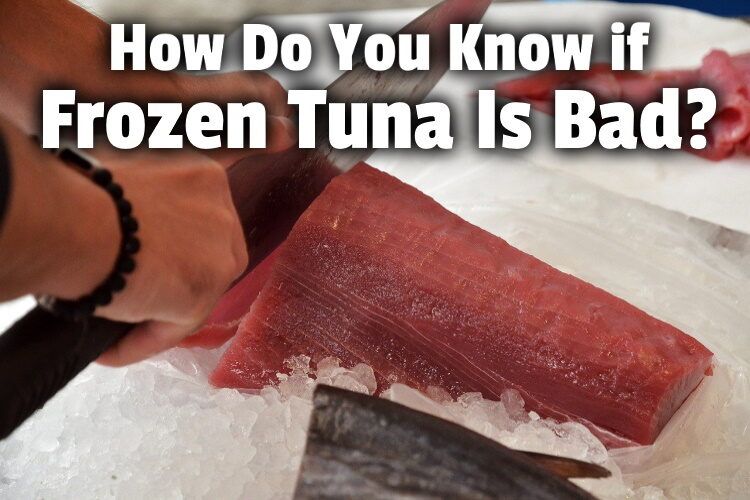 Lots of tuna is previously frozen. And sometimes, we just toss it in the freezer to thaw and use later. But can it go bad, and how do you know if frozen tuna is bad?

As a general rule, if frozen tuna has gone bad, the color will have turned inordinately dark and have lost its reddish or pinkish hue. But it may also smell not only fishy but have a sour, ammonia-like smell. Lastly, if it has lost its firmness and is slimy to the touch.

But there’s a lot more.

In this article, we’ll find out if frozen tuna can go bad and if it’s okay for tuna to smell fishy. We’ll also find out how long you can keep tuna frozen and a lot more.

Light lunch while we prep the bathroom to paint! So nice to have this time to spend together. We are taking it one day and project at a time. I found some tuna steaks I had frozen a while ago. I have just a bit of spinach left, so a little caprese salad. pic.twitter.com/2rcuDv9Vzh

Frozen tuna can go bad if it was spoiled prior to being frozen, if it has been thawed and refrozen, or if it has been in the freezer longer than 8 months.

If it was thoroughly cleaned and then frozen at the recommended temperature, it would not go bad. The USDA advises that if frozen under the right conditions, frozen raw fish will be safe to consume indefinitely.

However, it went on to advise that for the best quality, it is ideal to consume frozen raw fish within 3 to 8 months of purchase.

In effect, the frozen tuna will not be harmful, but its texture and taste may leave a lot to be desired.

So, the key issue is to ensure that the tuna was properly frozen in the first place. Blood should be removed, other unwanted parts should also be removed, and the skin scraped free of slime before it’s frozen.

Then, it is thoroughly cleaned.

That’s when it can still remain safe after months of storage. But if it isn’t properly frozen, it can easily go bad. It can develop a nasty smell and taste, and more, it can make one sick. This is because it would be easy for bacteria and parasites to thrive on the tuna!

Make sure to buy from top-notch fishmongers, and you won’t have to worry.

Frozen tuna should not smell overly fishy. If frozen tuna smells fishy, it is probably a sign that it has gone bad. When it is still good, tuna has a fresh sea-air smell, not an overly fishy odor.

A strong fishy odor is a red flag.

Tuna has a naturally pungent smell that’s meaty. It smells clean, fresh, and like the ocean, whether it’s fresh, in a pouch, or in a can. If you have to plug your nose because it smells even a tad rotten, it’s gone bad.

Previously frozen tuna lacks some of the characteristics of fresh tuna, such as bright eyes, firm flesh, red gills, and bloodlines. But they should not have a sour or ammonia-like smell.

Some of the key signs that indicate that tuna has gone bad are a sour smell, slimy texture, and dull color. So, to be safe, simply discard frozen tuna if you perceive that it smells fishy or there’s something off about its color.

In a recent article I published, I explained what kind of fish is sushi-grade and if you can use frozen fish for sushi. But I also revealed if there’s a difference between sushi-grade salmon and regular salmon.

Below-zero temperatures mean you don’t need to put your fish inside a freezer in Cambridge Bay, #Nunavut to keep them frozen. This photo from last October is the favourite of my own 10 top #Arctic photos taken in 2017. pic.twitter.com/XNbYPTSRSq

How long can you keep frozen fish in the freezer?

The USDA states that frozen fish or shellfish will be safe indefinitely in the freezer. However, the flavor and texture will lessen after lengthy storage. Frozen raw fish is best used within 3 to 8 months; shellfish, within 3 to 12 months.

You’ve probably read accounts of fish, and other animals found frozen in ice for thousands of years. Interestingly, they are almost always well-preserved!

In effect, properly frozen fish can be kept in the freezer for as long as you like. But I suspect that you’re not excited about the idea of eating fish when its flavor and texture have been compromised.

So, it’s best to consume within the recommended 3 to 8 months range.

And, ideally, you want to clean your freezer on a regular basis. So, the idea of keeping fish in it for decades is properly not what you would like.

If tuna goes bad in the freezer, does it change color?

Yes. If tuna goes bad in the freezer, it does change color. It will lose its naturally reddish or pinkish hue and will turn dark, potentially close to black. In some cases, it may also turn green when it has gone bad.

If it is still good, even though it darkens, it would still have a reddish hue. So, watch out for any sign of discoloration. You shouldn’t eat tuna that’s discolored.

Top-quality tuna is often brownish-red. In general, red is a signifier of freshness and quality. Of course, tuna is often treated so that it can maintain that color. After it’s been defrosted, tuna that’s been treated is often bright red, and it gradually fades to a watermelon pink after a few days.

When it’s not treated, it has an unappealing brown color (which is no indication that it is bad).

Unctuous tuna belly from Pura Vida Fisheries at the Dag Hammarskjöld @GrowNYC farmers’ market (via our freezer) simmered with onions in broth leftover from red-cooking pork belly a while ago. Set atop Japanese rice. A good dinner, with a quick cucumber pickle/salad alongside. pic.twitter.com/p5UxqVPTLf

What happens if you eat old tuna from the freezer?

As long as it has been properly frozen and was fresh prior to being frozen, frozen tuna is safe to eat indefinitely. But after 8 months, the flavor and texture may be less desirable. But it will not pose a health hazard.

But as I always say; when in doubt, throw it out.

If it was properly frozen and there has been no case of cross-contamination, there’s nothing to worry about. As we found out earlier, frozen fish can last an incredible amount of time and still be safe to eat.

Buy from top-notch fishmongers and preserve your tuna in the best possible way in a freezer, and you can enjoy it anytime.

But is it still safe to eat if it has turned brown?

Interestingly, this is what I explored in a recent article I published. I get into all the possible reasons tuna might change colors and when it’s acceptable to eat and when it’s not.

In the article, we found out if frozen tuna can go bad and whether frozen tuna should smell fishy. We learned that when properly frozen, tuna is safe indefinitely!

We also found out how long one can keep fish frozen in a freezer. We learned that fish can be kept for close to a year without losing quality. But that it’s best to eat them earlier so that the flavor and the texture do not suffer.

Then, we looked at whether tuna changes color when it has gone bad in the freezer. Yes, it does change color.

Lastly, we wrapped things up by looking at what happens if one eats old tuna from the freezer. There’s a difference between old and bad. As long as the old tuna was properly frozen, nothing happens.

Of course, eating bad tuna is a different ball game. In fact, it is an invite to sickness!

Image by Umbe Ber from Pixabay

link to How Do You Defrost Frozen Tuna for Sushi?

Frozen tuna is always best for making sushi at home. But it feels wrong to defrost it in the microwave. So how do you defrost frozen tuna for sushi? The best and safest method for defrosting...

Continue Reading
link to Can You Eat Raw Tuna Steak from the Grocery Store?

I love seared ahi tuna. But sashimi is awesome too! And while I know most grocery stores do sell tuna steaks, I wondered, can you eat raw tuna steak from the grocery store? Here’s what I...