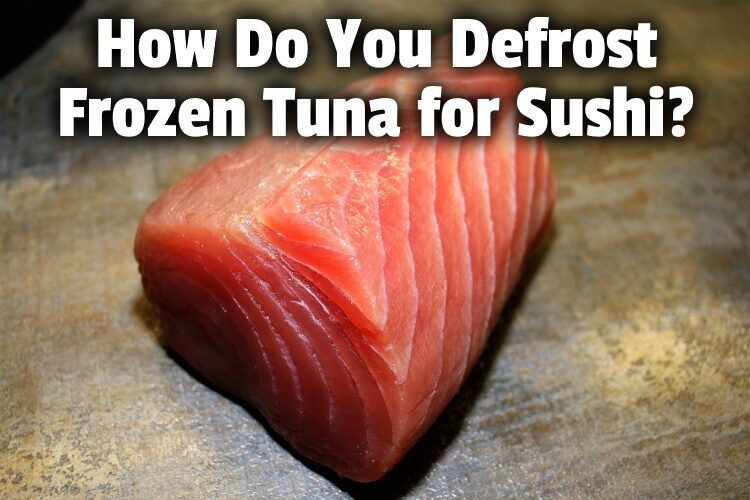 Frozen tuna is always best for making sushi at home. But it feels wrong to defrost it in the microwave. So how do you defrost frozen tuna for sushi?

The best and safest method for defrosting frozen tuna for sushi is to put it in a bowl covered with plastic wrap and place it in the refrigerator 8-12 hours prior to using it. But it also works to place it in a colander in the sink under running water for 30 minutes.

While you can defrost it in the microwave, I personally would not as it could adversely affect the texture or slightly cook portions of it.

In this article, we’ll find out if you can use fresh or wild-caught tuna for sushi, and we’ll look at the aforementioned methods step by step.

Can you use frozen tuna for sushi?

As a general rule, all tuna (and other fish) that is best for sushi will be previously frozen. However, to be truly safe for raw consumption, it will be labeled “sushi-grade” or “sashimi-grade”. So do not use just any frozen tuna.

So, what constitutes “sushi-grade”?

Immediately after they are caught at sea, after being killed and cleaned, tuna is flash-frozen at the required temperature to kill off pathogens.

Why? Fish, like most other animal proteins, often have parasites in them when they are caught. These are bacteria and parasites that are harmful to us.

It’s understandable, therefore, that the FDA has regulations in place that fish, including tuna, must be frozen at a certain temperature soon after they are harvested.

In effect, virtually all tuna, even those in high-end sushi restaurants, have been frozen prior to being prepared.

In addition to getting rid of pathogens, some sushi experts believe that freezing tuna also help in preserving the flavor. So, go ahead and use your frozen tuna for sushi.

This leads us to an interesting question: Can you eat raw salmon from the grocery store?

In a recent article I published, I get into issues such as whether you can eat raw fish from the grocery store and what happens if you eat raw salmon.

I showed whether you could eat Costco or Walmart salmon raw. But I also revealed whether freezing salmon kills parasites.

You really know it’s been one of those days when you put your tuna steaks on window sill to defrost and the birds get to it first 🤣🤣🤣 pic.twitter.com/joGujx5vP3

How do you defrost tuna quickly?

To defrost tuna quickly, place it in a sealable plastic bag and ensure the air in the bag is removed. Then, put the bag in cold water for thirty minutes to an hour. The water’s temperature should be between 50 and 68 degrees Fahrenheit.

Don’t use water with a temperature that is greater than 77 degrees Fahrenheit as this will adversely impact the taste of the tuna and may spread bacteria.

In effect, don’t use warm water or hot water to defrost tuna. You also don’t want to expose the tuna to direct sunlight.

There are a couple of other ways to defrost tuna. They include:

Let’s check out the first method. In a bit, we’ll consider two other methods.

Defrosting tuna under running water involves 3 simple steps. They are

Use a bag that can cover the whole fish, put the tuna in it, and ensure you remove air from the sealable plastic bag. Seal it and place the fish in a bowl or container.

Place the bowl with the tuna under cold water

If it floats, press it down gently to ensure it’s submerged in water. The water’s temperature should be less than 25 degrees centigrade.

After defrosting, you can store it in the refrigerator for up to 48 hours. But it’s best to prepare it for consumption after the defrosting.

If the tuna is small, the steps above will suffice.

But if it’s big, you’ll need more time to defrost it. It makes sense, right? If the latter’s the case, you may need to hold the fish in water for up to 30 minutes to an hour.

In some cases, depending on the size of the fish, it could take you 3 to 4 hours.

7lb fresh tuna. It’s frozen in a block. I don’t want to thaw the whole thing so gonna try my electric knife pic.twitter.com/Eh7p3caic1

Can you thaw frozen tuna for sushi in the fridge?

As a general rule, it works well to thaw frozen tuna for sushi in the refrigerator. Simply rinse it under cold water and wrap it in a clean cloth that has been soaked in saltwater. Place the tuna in a bowl and put it in the refrigerator for 8 to 12 hours.

It’s a good method seeing as the frozen tuna would thaw at a safe and constant temperature. The downside is that it’s not quick.

Check out a recent article I published. In it, I explained what kind of fish is sushi-grade and if you can use frozen fish for sushi. But I also revealed if there’s a difference between sushi-grade salmon and regular salmon.

I eat raw tuna every day. Buy it flash frozen, which kills the parasites. Thaw & drain till ice is out, then fridge overnight to finish. Perfect every time. Right now, eating shrimp, mushrooms, chickpeas in garlic butter I just made. pic.twitter.com/3faPjYg8q7

Can you thaw frozen tuna in the microwave?

While not as ideal as other methods, it does work to thaw frozen tuna in the microwave. The issues with microwaving are that it can affect the texture, and it is easy to slightly cook the tuna in the thawing process, resulting in lower-quality sushi.

Simply put the frozen tuna in microwave-friendly containers and choose the fish defrosting setting. Every 5 to 10 minutes, turn it over to ensure even thawing.

On average, it should be thoroughly thawed in 15 to 30 minutes.

As you can see, thawing frozen tuna in the microwave is one of the quickest methods. Before putting the fish in the microwave, rinse it in cold water for a minute and pat dry it with paper towels.

One of the upsides of using a microwave to thaw frozen tuna is that it does not alter the texture or taste, but ONLY if done properly. Use this method of defrosting if you plan to cook the frozen tuna immediately.

You’re in luck because I got into it in a recent article I published. I looked at whether Trader Joe’s sells sushi-grade fish and if frozen ahi tuna is good for sushi. I even revealed if you need sushi-grade tuna for seared tuna.

This week our Product of the week is our Frozen Joii Tuna – classy, raw, ready to eat fish. Simple, safe & bang on trend! Simply take what you need from the freezer, thaw in the fridge overnight, plate it up & dress for service. Visit our website for more: https://t.co/S9rmskQ3Fw pic.twitter.com/CCUoQ8oCrZ

How to thaw sushi-grade fish – step by step

Rinse and repeat until it is thawed.

Now, there are three different ways to thaw sushi-grade fish.

But for the quickest, use a microwave. Using a refrigerator takes the longest time, as we have seen earlier.

Can you make sushi with any grocery-bought fish?

This is what I explored in a recent article I published. I looked at what makes fish sushi-grade, and can sushi be made with any fish?

Then, I showed whether you could use store-bought salmon for sushi. But I also revealed the most common fish used in sushi.

In the article, we looked at whether it’s okay to use frozen tuna for sushi and whether you can thaw frozen tuna in the fridge.

We found out how to defrost tuna quickly.

We found out if you can thaw frozen tuna in the microwave. Lastly, we wrapped things up by finding out how to thaw sushi-grade tuna step by step.

Image by Reinhard Thrainer from Pixabay

link to What is the Difference Between Sushi-Grade Fish and Regular?

You’ve heard the term sushi-grade so many times. But does it really mean anything or have any legal standing? And what is the difference between sushi-grade fish and regular? Here’s what I...