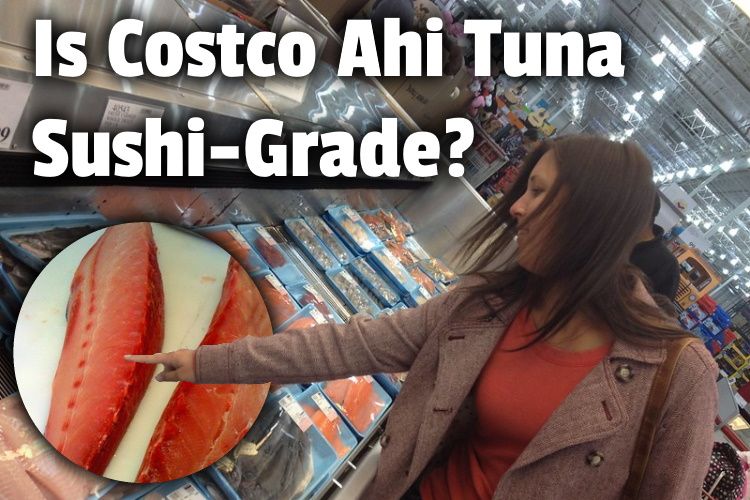 There’s nothing quite like making sushi at home. And ahi tuna is one of the best fish to use for sushi. I know Costco has great deals on ahi tuna, but I wondered, is Costco ahi tuna sushi grade?

Costco offers sashimi-grade super frozen yellowfin tuna which is one of the 2 types of fish typically called ahi tuna. The other type, not typically available at Costco is bigeye tuna.

And they also offer wagyu sashimi-grade Hamachi, which is also known as yellowtail. This too is perfect for sushi. But even fish labeled sushi-grade isn’t 100% risk-free.

But yellowtail should not be confused with yellowfin tuna. Hamachi/yellowtail is not a type of tuna.

So that’s just a quick answer and doesn’t tell the whole story. After all, most grocery stores don’t label fish as “sushi-grade” as most don’t want the liability if someone eats it, gets sick, and claims it was the tuna. And is there even any Federal regulation regarding the terms “sushi-grade” or “sashimi-grade”?

Home sushi chefs DO have options. So let’s explore all of them!

Yummy Ahi Tuna poke that we got from #costco we added some more spice to it. #food #nomnomnom #instagood #fish pic.twitter.com/OGWK3ay5m7

Costco’s sashimi-grade super frozen yellowfin tuna is safe to be eaten raw due to its freezing process, which happens on the fishing boats.

But any fish NOT labeled sushi or sashimi-grade is technically not safe to eat raw.

Before tuna or any other fish can be prepared and eaten raw, they need to have been bled, gutted, and frozen immediately after being caught.

Unless you’re positive a fish has undergone this process, you shouldn’t eat it raw. But if you can find a fishmonger or knowledgeable employee at Costco, ask.

Being strict is to ensure that the parasites in them are killed off.

But most retailers will tout a fish being sushi or sashimi-grade to justify the higher price point. But unless you can confirm that this procedure was followed, it’s not safe to eat raw.

And it’s worth pointing out that eating ANY fish raw still has risks. And just because a fish is labeled sushi-grade or sashimi-grade doesn’t mean those risks aren’t there. They will be much safer to eat raw, but there is still a risk.

What about Salmon? Can you eat them raw after you’ve got them from the grocery store?

This is exactly what I explored in a recent article. In it, I explained that there’s no legal definition of sushi-grade and no official grading system. But I did explain a cool workaround for that, though.

Seared ahi tuna salad with Japanese dressing! Picked this up for lunch at Costco!! pic.twitter.com/N8c0L6PIld

How do you know if ahi tuna is sushi grade?

To know if ahi tuna is sushi-grade, read the label, or confirm with a fishmonger at the grocery store that the ahi tuna you intend to buy has been frozen on the boat immediately following being caught.

Sushi grade means that fish is (1) safe to be eaten raw (2) its quality is high enough to taste good when eaten. It’s the highest quality fish the store has on offer, and it’s labeled Grade 1.

This is because anytime you eat fish raw, you’re exposed to the possibility of picking up parasites!

But, when fish has been frozen adequately for the requisite number of hours, and at the right temperatures, the fish becomes safe to consume.

When it’s been commercially frozen, you can be sure the parasites are dead.

Some would employ what’s known as super freezing. This means the fish is frozen at a much lower temperature than even what’s officially required.

This has the added benefit of keeping the tuna’s taste fresh for up to two years!

In other words, if you were to taste super frozen tuna and fresh tuna, you’d be unable to distinguish the difference. Another thing to note is that to further confirm if fish is still fresh, simply smell it.

Poke from Costco. Not bad but they need to cut the ahi tuna smaller. pic.twitter.com/5C6hdTYnQP

What’s the difference between sushi grade tuna and regular tuna?

Sushi-grade tuna was cleaned and frozen immediately following being caught while still on the boat which reduces the chance of parasitic infection from eating it raw or seared. Regular tuna may or may not be cleaned or previously frozen, so cooking is necessary to ensure any parasites are killed before consuming.

But sushi-grade is not a regulatory term.

In other words, it’s unlike Prime Beef, where the USDA has certain criteria that must be met. But what exactly happens to tuna on the boat to make it sushi-grade?

While the FDA doesn’t provide guidelines for determining which fish is sushi-grade and which isn’t, it has procedures in place that must be followed if fish is to be consumed raw.

“Parasite Destruction Guarantee” is to ensure the fish has no parasites before they’re eaten raw. It’s about doing the following:

The parasites are killed at these low temperatures.

But, to be effective, the process must start immediately when the fish is caught. For the process to work, they must be caught, bled and gutted, and frozen within 8 hours of leaving the water.

When the process of ensuring that Tuna is rid of parasites has been followed, it’s referred to as sushi grade. In effect, it’s safe to be consumed raw.

Can you use ahi tuna steaks for sushi?

Any sushi or sashimi-grade ahi tuna can be used for sushi, be it fillet or steak cut. A steak has simply been cut thicker and differently than a fillet but offers the same taste and texture as sushi.

If you can’t find sushi or sashimi-grade tuna, don’t be tempted to just freeze the fish you buy.

To kill the parasites, fish must be frozen at -4°F (-20°C) or below for 7 days at a minimum. Your fridge at home just isn’t going to go that low. You can, however, sear the ahi and use it that way.

What if you also like to order meat? Where can you get the best beef?

In a recent article of mine, I compared Sams vs. Costco concerning the quality of the meat they sell. And, I revealed which offers better quality meat.

Can you buy sushi-grade fish at Costco?

While it may vary by location, Costco often offers both Wagyu sashimi-grade Hamachi, as well as sashimi-grade super frozen yellowfin tuna.

Of course, what’s available will also depend on your location.

And if you do find salmon, it’s best to avoid the “wild’ variety. This is because they have a higher probability of containing parasites. The farmed variety is better in this case. Actually, that’s typically true for any fish you buy you plan to use for sushi.

You might be wondering why is “farmed” salmon better when we know wild-caught salmon is more sought-after?

We looked at a couple of things, such as if it’s safe to eat Cosco’s ahi tuna raw, how to determine if ahi tuna is sushi-grade, whether ahi tuna steaks can be sued for sushi and if one can get sushi-grade fish to buy at Costco.

Most fish are susceptible to parasitic infection.

This is why eating raw fish (that’s not been properly frozen) can be a huge risk. And while a recent study found no increase in rates of the parasite Pseudoterranova spp in raw fish, there, unfortunately, has been a 283% increase in the Anisakis spp parasite.

So making sure to only use sushi or sashimi-grade fish, while still no guarantee, is crucial!

Hamachi Fillet by Vera Yu and David Li and she can’t help it by Shawn Campbell are licensed under CC2.0 and were edited, cropped, color-adjusted, and merged with a text overlay added.

link to Can You Eat Trader Joe's Ahi Tuna Raw?