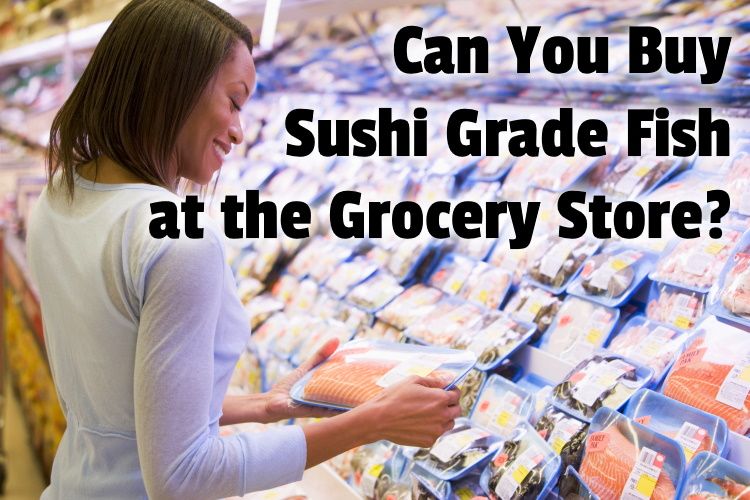 A lot of people love to eat sushi, but going to a restaurant can get pricey. This leads many to want to make it at home and eventually wondering can you buy sushi-grade fish at the grocery store?

Here’s what I know from decades in the grocery business:

As a general rule, sushi-grade fish is sold at most higher-end grocery stores. It will be labeled sushi-grade or sashimi-grade indicating it was cleaned and flash-frozen while still on the boat shortly after being caught.

But, the term “sushi-grade” is not a standard that’s backed by any governmental health regulation. It’s actually a marketing term coined by the industrial fishing sector and denotes fish that’s safe to be consumed raw.

In this article, we’ll explore how you can go about getting fish that’s safe to be eaten raw.

I’ll explain why true sushi-grade fish has actually been previously frozen. I’ll also explore why farm-raised is probably better than wild-caught if you want fresh and not frozen fish for sushi.

Let’s get into it!

Once you have our Sushi grade fish, you won’t want anything less. #sushi #salmon #mississauga #toronto #oakville #brampton pic.twitter.com/7sMj98zTaJ

How do you buy fresh fish for sushi?

To buy fresh fish for sushi, look for fish that’s been farm-raised and not wild-caught. Farm-raised fish is far less likely to contain parasites. But the safest fish for raw sushi is fish that was previously frozen.

Or, you could buy regular fresh fish and follow a deep-freezing process that will kill the parasites before you prepare it for consumption. But that requires you having a freezer that goes down to -4°F (-20°C).

Most of us don’t have a freezer that cold. And, there’s always a decent chance fish will contain parasites.

After all, their habitats are not an oasis of pristine purity, right? In most cases, we don’t know how hygienic they are. Fresh fish might be okay if you’re going to cook or roast them. Done very well, the heat would kill the parasites.

The only exception to the above is if the fresh fish has been aquacultured and fed parasite-free pellets.

If sushi’s the plan, you’ve got to be careful. It’s better to go for “sushi-grade” fish rather than fresh fish unless you’re sure it was fed parasite-free feed. But, if you aren’t, then make sure that it was frozen immediately after it was caught, or freeze it for some time before you even consider using it.

But why is frozen fish is safer?

Then, check out a recent article of mine, where I explored why in some detail. In it, I provided answers to questions such as: Can I eat raw fish from the grocery store and what happens if you eat raw salmon. I even explained why deep-freezing might kill parasites but not kill the germs!

The 6 best sites to buy sushi-grade fish online, according to chefs: https://t.co/wEZmFU8c78 pic.twitter.com/UebwaguhTV

Is supermarket fish safe for sushi?

Most supermarket fish will not be safe for sushi. Look specifically for fish labeled sushi-grade or sashimi-grade. This means it has been cleaned and deep-frozen while still on the boat. It is not advisable to eat other fish raw.

Simply let the people at the fish counter know you’re planning to prepare sushi and ask if what they have is safe to be eaten raw.

As I have hinted earlier, what makes fish safe for sushi is that it’s got no parasites or germs.

To accomplish this, the FDA provided guidelines that fishmongers are expected to follow. It’s known as the parasite destruction guarantee.

Apart from the guideline, there are no local health department regulations or laws to guide the sale and consumption of raw fish.

“Parasite Destruction Guarantee” is to ensure the fish has no parasites before they’re eaten raw.

It’s about doing the following:

The parasites are killed at these low temperatures. But, to be effective, the process must start immediately when the fish is caught.

For the process to work, they must be caught, bled and gutted, and frozen within 8 hours of leaving the water.

When the process of ensuring that fish is rid of parasites has been followed, it’s referred to as sushi-grade. In effect, it’s safe to be consumed raw.

You’ll have to check the label on the package and also talk to those who work in the fish section of the supermarket to confirm that the fish has actually been deep-frozen.

Is there any exception to the guideline?

Yes. The FDA advised that “Aquacultured fish that have been fed parasite-free formulated feed may be served raw or undercooked without freezing. These fish are not prone to parasites”.

Yes, H Mart sells sushi-grade fish. Currently, its website only lists sushi-grade salmon. However, they also have live fish in tanks available for purchase which could be appropriate for sushi if properly frozen.

If you’ll rather have it whole, you can. If you prefer to have the fish filleted, they’ll do that. There’s Tuna, Salmon, tilapia, and a host of other fish available in tanks.

H-Mart is a great Asian market, and I used to shop there when I lived in Duluth north of Atlanta. But you may not always live somewhere with an H Mart nearby.

But what about Costco? Can you get fish for sushi there?

Find out in a recent article of mine. What really surprised me was how many types of fish they have available labeled for sushi or sashimi.

Whole Foods Market does sell sushi-grade fish. Most often, that includes both tuna and salmon, but it does vary from location to location.

In fact, some professional chefs buy what they need at Whole Foods Market as was often seen in episodes of Top Chef. Since Whole Foods always has knowledgeable fishmongers available at the counter, just ask when you’re there.

But then there is Whole Foods nemesis, Trader Joes. Everyone knows Trader Joes has low prices. But they aren’t known for offering a lot of customer service, and they definitely don’t have a seafood counter.

But if you love Trader Joe’s, you might be curious if you could use their ahi tuna for sushi.

Find out in a recent article of mine. The surprising answer is yes they do. But as you would expect, they don’t have many offerings, nor can you have anything cut to order.

Just click the link to read it on my site and get the details.

They have several types of salmon on offer, such as:

Of course, what’s available would depend on your location. But, you can always confirm via their app or website. And if you opt for salmon and plan to eat it raw, it’s best to avoid the “wild’ variety.

This is because they have a higher probability of containing parasites.

The farmed variety is better. So, if you’re thinking of making sushi, “farmed Alaskan salmon” or “farmed Atlantic salmon” are great choices. You might be wondering, why is “farmed” salmon better? Simple: their food is different from those in the wild.

The farmed variety’s diet consists of parasite-free pellets, while those in the wild invariably eat parasite-infected food.

Costco’s Tuna is usually sold in the form of steaks, which might not come out very well in sushi. But they also stock albacore and yellowfin. These are excellent for making maki and poke.

Fresh fish can be consumed raw.

But, certain conditions must be met to avoid food poisoning. In this article, we looked at how to buy fresh fish for sushi. It’s risky unless it was aqua-cultured and fed parasite-free pellets.

We also looked at whether supermarket fish is safe for sushi, and we wrapped things up by finding out if one can get sushi-grade fish from H-Mart, Whole Foods Market, and Costco.

There’s a need to exercise great care when buying food we eat raw.

Having said that, the truth is you can actually make sushi yourself. You simply need to make sure you get fish that’s of the highest quality and processed following FDA guidelines.