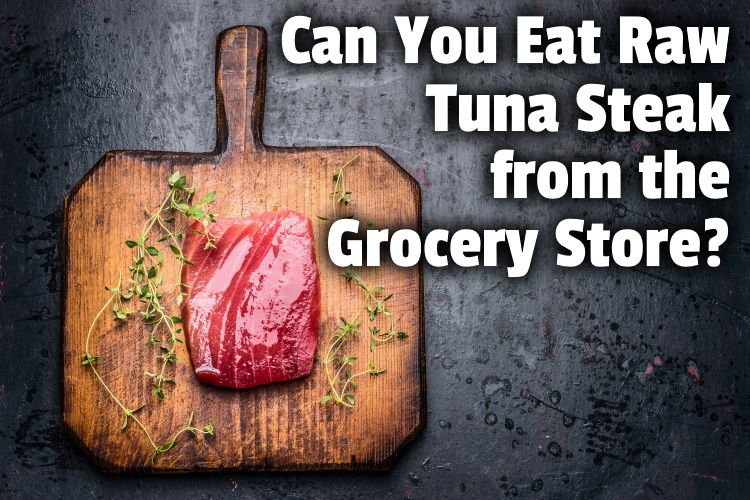 I love seared ahi tuna. But sashimi is awesome too! And while I know most grocery stores do sell tuna steaks, I wondered, can you eat raw tuna steak from the grocery store?

Tuna steak from the grocery store should only be consumed raw if it is labeled sushi-grade or sashimi-grade. While this is still not a guarantee against parasites, it means the fish was caught, cleaned, and frozen quickly while still on the boat and is the best option for sushi or sashimi.

If it’s not written on the label, don’t eat it raw. The quality is not the same. You’ll discover why in a bit.

In this article, I’ll explain why those terms don’t have any legal meaning. But, we’ll look at how the fish labeled that way are prepared. Finally, we’ll look at the actual chances of getting a parasite from raw fish.

Let’s cut to the chase…

Need a date night idea or a fun family night?
All of Bessie’s salmon and tuna are sashimi-grade! What’s your favourite type of sushi?

Are all tuna steaks sushi grade?

Not all Tuna steaks are “sushi-grade” or “sashimi-grade.” If they are, it will be labeled as such as stores can typically charge more for it as it is a selling feature.

If it’s not written on the label, don’t eat it raw. In fact, it’s best to confirm from your fishmonger. You don’t want to assume. Some fishes contain parasites, so you want to be very careful when you’re planning to eat them raw.

Store-bought fresh-fish are not “sushi-grade.” That’s because to be labeled that way, it has to have been frozen on the boat after being caught.

The designation “sushi-grade” or “sashimi-grade” has no regulatory backing but is a label in fish marketing to refer to the highest quality fish that’s also safe to be eaten raw.

This is evidenced by the fact that the fish was frozen at extremely low temperatures to kill off parasites and “lock-in” the flavor, taste, and texture.

While the FDA or USDA does not have a qualification process for grading fish, the FDA provides some guidelines around selecting and serving fresh and frozen fish safely.

It’s TOO HOT to cook! Good thing you don’t have to… Enjoy our Grade #1 #Yellowfin #Tuna RAW. Grade #1 Tuna is the HIGHEST grade of tuna because of its fat content, color, and freshness. Enjoy it as #tartare or in #SUSHI!

Does tuna steak need to be cooked through?

Tuna steaks that are not labeled sushi-grade, or sashimi-grade should be cooked until the center of the steak reaches 145° F for at least 15 seconds. This is to minimize the risk of parasites. But from a flavor and texture perspective, the ideal tuna steak is lightly seared and very rare in the middle.

Tuna has a meaty feel and even looks like meat. You want steaks that are firm, dense, and dark or bright red in color. Be sure to buy from a store that makes its purchases from sustainable sources.

Before you cook, you want to check if the steak has scales.

Wash them off. Marinate if you want to tenderize and make it more flavorful. If you don’t have the time, you could brush the fish with olive oil or melted butter.

Remember to add your favorite herbs, salt, and pepper.

It’s oily and, when properly prepared, can be very delicious. But, cooking, as you know, is a delicate art. Cook something too little, and you may not be able to stand them. Cook them just a little bit more, and you may overcook them. It’s the same with Tuna.

So, if you decide to cook it, you shouldn’t cook it through. Cook it in a frying pan for just a while, then sear it. If it’s cooked all the way or overcooked, it will lose its flavor.

The searing is best done on a grill. If you’re overly sensitive to medium-rare tuna, go on cook it, but be careful not to overcook it.

It’s time you upgraded from the spicy tuna roll…Meet Ahi Tuna: A delicious sushi grade tuna that should be only lightly seared or consumed raw. #dallasfarmersmarket #mydtd #rexsseafood pic.twitter.com/ZKiGkp1jBO

No fish, even sushi-grade or sashimi-grade fish, is 100% certain to be free of parasites. However, sushi-grade tuna is the best option for eating raw and has a low likelihood of making anyone sick.

Sushi-grade also has no legal definition with the FDA, much like the term “all-natural”.

But, Tuna labeled “Sushi-grade,” is relatively safe. What that label is guaranteeing, as it were, is that the Tuna fish was flash-frozen immediately after it was caught.

Fresh fish, a writer suggested, can be likened to a melting ice cube.

Its value can only be maintained, not improved. So, unless you plan to cook fresh fish immediately because it’s perishable, it has to be frozen, at the recommended temperatures, or smoked.

But, if it’s going to be eaten raw, it must have undergone a freezing process recommended by the FDA. We’ll check out the guideline in a bit.

But what about tuna from Costco?

Maybe you’re frequently at Costco or considering shopping there, but you’re curious if their Ahi Tuna is sushi-grade. It’s what I explored in a recent article of mine. And I was really surprised to learn the answer.

One of our all time favorites is the raw hand cut sushi grade Tuna with spicy mostarda aioli and chili vinegar. pic.twitter.com/s18xzaepjb

What does sushi-grade tuna mean?

“Sushi-grade” is a marketing term and not a legal definition. It simply means the fish was caught and then quickly cleaned and flash frozen on the boat at a temperature of -4°F (-20°C) and held that low for 7 days.

But there are a few temperature and time variations I get into below.

So, it’s not an official standard that’s backed by government regulation. As you know, the USDA grades beef. But, there’s no similar grading for fish. However, it caught on and has come to represent the highest quality of fish that’s considered safe to be eaten raw.

Before Tuna is classified as such, it must have been frozen per guidelines provided by the FDA.

The purpose is to ensure that the fish is parasite-free. The guidelines, known as “ Parasitic Destruction Guarantee”, relate to how long the fish should be frozen and at what temperature. It’s technically called flash-freezing, and it must have been done immediately after the fish was caught, naturally, after they’ve been gutted, bled, and cleaned.

The below list is what the FDA “Guarantee” entails:

The parasites can’t survive at temperature levels that low, provided the process of freezing was started soon after the fish was caught.

Depending on the kind of freezing technology employed, flash freezing actually accelerates the process, such that what would have taken days or hours to freeze is done in a matter of seconds.

Maybe you buy most of your grocery at Trader Joe’s, or you’re simply curious about their seafood?

Can you eat the Ahi Tuna TJ’s sells raw? I answered the question and shared some other interesting facts in a recent article of mine.

How likely is it to get a parasite from sushi?

It is highly unlikely to get a parasite from sushi because most reputable fishmongers that label fish as sushi-grade ensure the fish has been commercially frozen at the temperatures recommended by the FDA. Never eat sushi where the fish is claimed to be fresh and never frozen.

Most sushi restaurants are aware of the health implication of eating raw food.

So, they’re careful about the selection, storage, and preparation of the fish they use as sashimi or sushi. You want to eat sushi only in first-class restaurants and buy “sushi-grade” fish at your grocer when you want to prepare the dish at home.

When buying the fish, it’s also smart to ask at the store how the fish was caught and processed if “sushi-grade” or “sashimi-grade” is on the label.

Apart from the possibility of parasite infection, the freezing process is one of the reasons fish is easily transported from country to country and for all-year availability. When fish is super frozen, it can retain its freshness, firmness, and flavor for upward of two years.

If the risk of contracting parasites were high, it would have resulted in an epidemic! So, there’s no need to be apprehensive as long as the variety of fish you’re buying has been flash-frozen and handled hygienically afterward.

All that being said, anytime you eat anything raw, or anything prepared at a restaurant, there is some risk of a food-borne illness. But that risk is low in most cases.

But what about Salmon? Are they also safe to be eaten raw? This is what I looked at in a recent article of mine. What really surprised me was how much safer farm-raised is compared to wild.

Eating anything raw comes with some risks.

In our exploration, we learned what sushi-grade really means. It’s a marketing convention. We looked at questions such as: if sushi-grade Tuna is safe to be consumed raw and how to cook Tuna steak if you want to go that route.

We also explored whether all Tuna steaks make the cut and how likely it is to have a parasitic infection from eating raw fish.