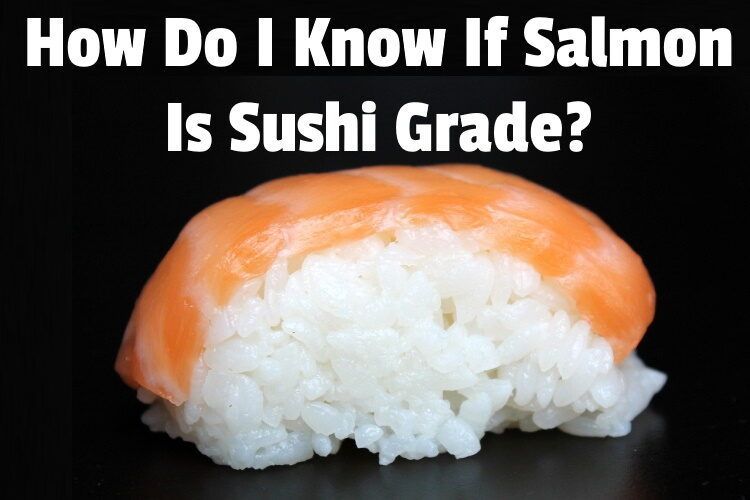 Salmon is the 2nd most popular fish used in sushi. But can you just buy any salmon from the grocery store if you want to make your own? And how do I know if salmon is sushi grade?

As a general rule, salmon that is appropriate for sushi is labeled as “sushi-grade”, “sashimi-grade” or “safe for raw consumption”. This is an indication that the salmon has been flash-frozen on the boat after being caught, per USDA guidelines, and is safe to be consumed raw.

We’ll find out how to know what the risks are of just using any salmon and whether all farmed salmon is technically sushi-grade. We will also find out what determines sushi-grade and more.

Chirashi. I got fresh sushi-grade salmon and yellowtail from the local Japanese deli ☺️ pic.twitter.com/IrhbAyCm0w

How do you know if salmon is safe to eat raw?

Salmon for raw consumption is best if labeled “sushi-grade” or “sashimi grade”. But it is still relatively safe to eat raw if it has been previously frozen and is farm-raised, as the latter does not typically contain parasites.

Wild-caught salmon, on the other hand, is more likely to contain parasites.

It is vital, therefore, to ensure that you confirm that it has been frozen before you consume it. Ideally, you want to buy from higher-end stores and confirm that the fish has indeed been frozen. In such stores, look for labels such as “sushi-grade”, “sashimi grade”, or “for raw consumption”.

But regular salmon may also contain bacteria that will not be killed by having been frozen. The FDA lists wild salmon as a source of known parasites.

So, there’s a need to ensure that the raw salmon you intend to consume has been handled and stored in accordance with FDA guidelines.

If the wild salmon has been flash-frozen at -20 degrees Fahrenheit for at least 30 to 48 hours, and you are careful with the utensils you use in preparing it for consumption, it should be safe to eat raw.

What about other grocery store fish?

Can you make sushi with it? This is what I explored in a recent article I published. I looked at what makes fish sushi-grade and what types of fish are the best to use. Then, I showed whether you could use store-bought salmon for sushi. But I also revealed the most common fish used in sushi.

I don’t think this really counts as cooking, but I sliced it myself! I couldn’t help but splurge on some sushi grade salmon, hamachi, tuna and uni today 🤤#ChemistsWhoCook pic.twitter.com/NIiJCe1OjX

Is all farmed salmon sushi-grade?

“Sushi-grade”, is a label that indicates that fish is deemed safe to be consumed raw, and this is evidenced by the fact that they have been previously flash-frozen.

Now, it’s true that farmed salmon does not carry many risks of parasite infection relative to wild salmon.

This is because it is raised on feed pellets, preventing it from eating parasite-infected prey. But beyond its nutrition, you’ll agree that how it’s handled and stored shortly after it’s been caught is also vital.

So, ideally, “sushi-grade” farmed salmon would be one that has also been flash-frozen shortly after it’s been caught, butchered, and cleaned.

Anyone else just buy 1kg of sushi grade salmon? No, just me then. pic.twitter.com/UhC7MXdrbM

Sushi-grade is a term that indicates that fish is deemed safe to be consumed raw. The key determinant is that such fish has been flash-frozen soon after it was caught and thus has a lower risk of bacteria, parasites, and other harmful pathogens.

That said, I’d be remiss if I fail to say that, in point of fact, there are no laws that ensure that fish is meant to be consumed raw.

So we are basically trusting that the fish are actually caught and prepared in a manner that validates that they are indeed safe to be eaten raw.

In effect, “sushi-grade” is a marketing term; it is not backed by legislation. That fish is labeled “sushi-grade”; therefore, it does not mean it has been certified safe to be eaten raw.

The FDA provides guidelines to the effect that fish meant to be consumed raw should be flash-frozen shortly after they are caught and have been butchered and cleaned. But compliance with these guidelines is not monitored.

The guidelines are general in scope and relate to fish that is deemed safe to be consumed raw. So, it embraces “sushi-grade” fish and more.

It is known as “Parasite Destruction Guarantee”. The following are a part of it:

You’ll find a recent article I published riveting. In it, I explained what kind of fish is sushi-grade and if you can use ANY frozen fish for sushi. But I also revealed if there’s a difference between sushi-grade salmon and regular salmon.

Should you wash salmon before eating raw?

Do not wash salmon before eating raw thinking it will reduce the chances of food-borne illness. The USDA has stated that rinsing salmon before eating does NOT kill bacteria. In fact, using warm or hot water to wash the salmon actually increases the odds that pathogens would thrive.

That being said, I do prefer to do a quick rinse of all fish and then pat dry before using. I do this just to rinse away any fishy residue that might be on the fish. But again, it will do nothing for parasites.

Rinsing your salmon may also increase the risk of cross-contamination if the bacteria come in contact with your hands or other foods.

Washing your salmon could spread bacteria on the surface of the fish, in your sink, and utensils. If it’s sushi-grade salmon, you definitely don’t have to wash it before eating it raw.

This is the most important thing: the quality and safety of the fish in question. If it’s not sushi-grade, washing it would make no difference. It would still be unsafe.

That said, there could be times you may want to wash your salmon, especially if you skinned it yourself and want to remove scales or debris.

If that’s the case, be sure you’re using utensils that are bacteria-free and that you use cold water. It’s counterintuitive, but harmful pathogens thrive in warm or hot water.

What is sushi-grade salmon called?

Sushi-grade salmon can be called “sushi-grade”, “sashimi grade”, or “for raw consumption”. Where such labels are absent, it’s best to simply ask the fishmonger questions, letting them know that you intend to use the salmon for sushi or sashimi.

In order to avoid legal liability issues, some stores avoid these labels altogether. They don’t want the risk they could incur if someone were to buy fish they’ve labeled as safe, but the person became sick!

If the salmon is farm-raised, the odds that it has parasites are ridiculously low. You also want to consider the salmon’s freshness and whether it’s been frozen or cured. And make sure you ask the fishmonger. So, look for “farmed Alaskan salmon”.

This leads us to an interesting question: Can you eat raw salmon from the grocery store?

In a recent article I published, I get into issues such as whether you can eat raw fish from the grocery store and what happens if you eat raw salmon. I showed whether you could eat Costco or Walmart salmon raw. But I also revealed whether freezing salmon kills parasites.

In the article, we looked at how to know if salmon is safe to be eaten raw and if all farmed salmon is sushi-grade.

Then, we looked at what determines sushi-grade and whether you should wash salmon before eating it raw. We learned that sushi-grade is not backed by law, but what is indicated is that certain guidelines with regards to handling and storing fish have been met.

Lastly, we looked at what sushi-grade salmon is called.

Image by stumpi_1 from Pixabay