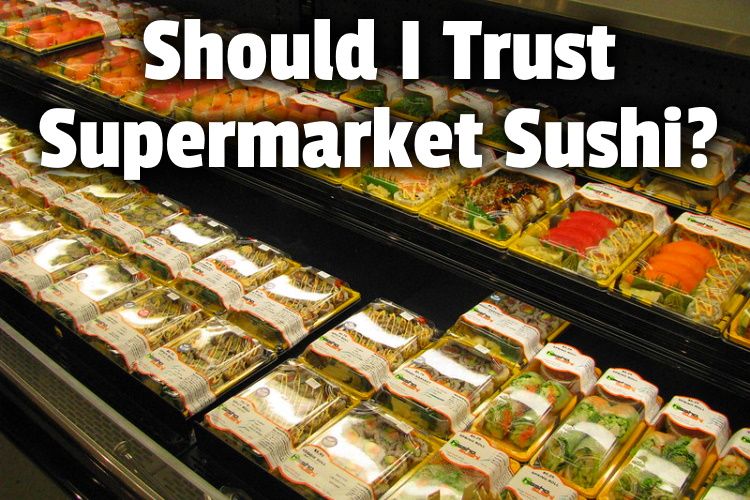 Let’s face it. For those of us who love sushi, we can’t always make it to a good sushi restaurant. And we see the big sushi case at the grocery store and wonder, should I trust supermarket sushi?

Here’s what I know from managing several sushi companies:

Sushi from reputable grocery stores is totally trustworthy and as safe to consume as restaurant sushi. While the quality of ingredients and the experience of the sushi chefs may be lower than that of restaurants, food safety standards will be the same.

In this article, we’ll explore issues around how safe store-bought sushi is. And we’ll home in on my use of the word “reputable”. After all, there’s a big difference between Whole Foods and Walmart.

Rolling the dice on some Kroger sushi. Questionable, I know. But only one way to find out. pic.twitter.com/gNI4Rcg5GA

Is it safe to eat sushi from the grocery store?

It is safe to eat sushi from the grocery store. Virtually all the sushi at the grocery store has been prepared under hygienic conditions and held to the same food safety standards as restaurants.

The standards are set by the U.S. Food and Drug Administration (FDA), and they are being adhered to by the companies that provide sushi to grocery stores.

If they were to stop meeting these standards, there would be a lot of cases of diseases or at least food poisoning, which would adversely affect both companies.

They could even lose their licenses. What makes some people a bit concerned is that some sushi has a raw component — the fish.

But sushi is no riskier to ingest than cold cuts, potato salad, and other prepackaged food.

And it’s worth noting that a lot of grocery store sushi is made with cooked fish. The ones that have raw fish make up a smaller portion of what you’ll see.

All that being said, while the sushi counter/department is often a 3rd party company, they still answer to the store manager of the grocery store.

I remember a time when I was running the Whole Foods Market in San Francisco (the 1st one at California and Franklin).

Our receiving manager called me to say that the sushi department was receiving a piece of raw tuna in a box in a non-refrigerated truck.

The safe zone for food is either below 40° F or above 140° F, so this was clearly not safe. And we rejected the delivery. (source)

“we haven’t seen problems with it, the way we have with E.coli and salmonella in burgers and chicken.”

Sushi becomes dangerous when it is spoiled. And the fish is not what poses the greatest risk; it’s the rice! Dr. Synder went on to explain:

“If rice is left at room temperature for about eight hours, a bacteria called Bacillus cereus will grow in it, which can make you ill.”

So, sushi is safe, even if you’re getting it from a grocery store.

By the way, do you like ahi tuna, and are you wondering if it is sushi grade? In a recent article, I revealed how to know if ahi tuna is sushi grade.

Having publix sushi on my break 😋 pic.twitter.com/fJqoFnPS6V

Why is grocery store sushi so bad?

Relative to fresh sushi from a high-end sushi restaurant, grocery store sushi does not quite offer the same culinary experience.

It’s one thing to sit down in a restaurant while high-quality ingredients are used to prepare sushi for you.

Perhaps, some of the ingredients have just been bought early that day. It’s another thing when you buy pre-made sushi that has been mass-produced.

As I explained earlier, grocery store sushi is safe. The companies that produce them and the grocery stores that sell them are held up to standards by the FDA.

So, what we’re considering here relates to quality.

Store-bought sushi does vary in terms of quality — it could be high, average, or low. But relative to sushi from dedicated sushi restaurants, their quality is low.

And it’s not surprising because store-bought sushi is a lot cheaper.

Sushi purists do not even believe in store-bought sushi, not because it is bad, but rather because they believe that it fails to meet the standard around how sushi is traditionally prepared and enjoyed.

Truth be told, sushi is meant to be prepared with the highest-quality ingredients by a trained sushi chef right there before you so that you consume it fresh.

To purists, sushi can be likened to an art form. Store-bought sushi is not bad. It’s just that the quality is not as high as that of its restaurant-prepared cousin.

So, you’re looking for tuna at Trader Joe’s, but you aren’t sure of its quality.

Can you eat Trader Joe’s ahi tuna raw? Does TJ sell sushi-grade fish? And, is frozen ahi tuna good for sushi? I explored these themes and more in a recent article.

How do you know if grocery store sushi is bad?

Let’s consider some of the signs that’ll help you determine that sushi has gone bad.

Is the fish looking fresh, or is it going stale?

It should be shiny and translucent. It should be attractive. It should be pinkish too, if it’s tuna. But color alone is not enough to gauge the freshness of the fish. If you’re sure the fish has started losing its natural color, don’t buy.

But color can be artificially maintained. Ensure the fish’s got no browning at its edge. That’s a surefire sign it’s going bad. A milky slime is also a no-no!

The smell, as you know, is almost a universal means of detecting how fresh something is. It works here too.

If it’s feasible to smell it, do so. If the odor is off, don’t buy. It’s that simple. An awful smell is almost always a sign that some bacteria are already present in the sushi.

Fresh fish is firm to the touch, and you’d encounter some resistance if you were to press it. A sign that it’s not been a long time since it was killed or brought out of a refrigerator.

This is obvious. Say you’re at a sushi bar in a grocery store. If the fish or any part of the sushi tastes funny, don’t swallow it. Good sushi shouldn’t taste funny.

If it’s abnormally cold when it was served, you may want to wait a bit before you get started eating it.

Can you buy sushi-grade fish at the grocery store?

Check out a recent article of mine where I answered the question and related ones, such as whether supermarket fish is safe for sushi. I also showed how to go about buying fresh fish for sushi.

Does supermarket sushi have raw fish?

Some supermarket sushi has raw fish. But the majority do not, as it helps to extend the shelf life and minimize food safety risks. The California roll, for example, is often made with crab, imitation crab, or crab salad, but all 3 are fully cooked.

There are also vegan options that have no seafood at all.

Supermarket sushi has grown varied and sophisticated over time. As such, you have several options. Centuries ago in Japan, the home of sushi, sushi essentially meant salted fish dishes in fermented rice.

Now, it’s made with or without raw or cooked fish or meat, vinegared rice, and vegetables. Soy sauce, wasabi, and pickled ginger are the common garnishes.

Do grocery stores have sushi chefs make their sushi?

Some grocery stores do use trained sushi chefs to make their in-house sushi. Yet, others purchase pre-made sushi from another company and have it delivered. But that sushi would still be made by a trained sushi chef. However, in both cases, the sushi chefs would be less experienced than restaurant sushi chefs.

But as I mentioned above, most grocery store sushi counters are run by a 3rd party company and are not staffed by actual employees of the grocery store.

So, why do grocery stores use outside contractors to prepare sushi?

There are two main reasons: some of their patrons don’t trust pre-made sushi. They think it’s sketchy.

So a company that only does sushi seems more trustworthy than sushi being prepared by the same high school guy who just bagged your groceries.

The second reason is that sushi is not easy to make.

It’s not a delicacy that an average chef or staff can make. Therefore, trained chefs are available to run sushi bars in a lot of grocery stores.

But maybe you still don’t trust it and would rather make your own.

In that case, you’ve probably wondered if it’s okay to eat salmon from the grocery store raw?

You’re in luck because a recent article of mine answers the question and more. I explained what happens when you eat raw salmon. And whether freezing salmon kills parasites.

Which supermarket does the best sushi?

Whole Foods Market is the best supermarket for grocery store sushi. However, Kroger, Publix, Trader Joe’s, H-E-B, and ShopRite are some other supermarkets that sell higher-quality sushi.

You can buy sushi at many supermarkets, but if you’re finicky about quality, a survey shows that Whole Foods is probably your best bet.

This shouldn’t come as a surprise seeing as it’s one of the best supermarkets, in fact, a pioneer in the industry.

In a survey by mashed.com, Whole Foods led the pack when respondents were asked who they thought does the best job when it comes to providing better quality sushi.

In the article, we checked out whether it is safe to eat sushi from the grocery store.

We also looked at why sushi from the grocery store is bad. We found out what to look for to know that supermarket sushi is bad.

We also found out whether supermarket sushi has fish in it and if grocery stores have sushi chefs. We wrapped things up by looking at the supermarket that sells the best sushi.

Kroger’s Sushi by NatalieMaynor is licensed under CC2.0 and was cropped, edited, and had a text overlay added.